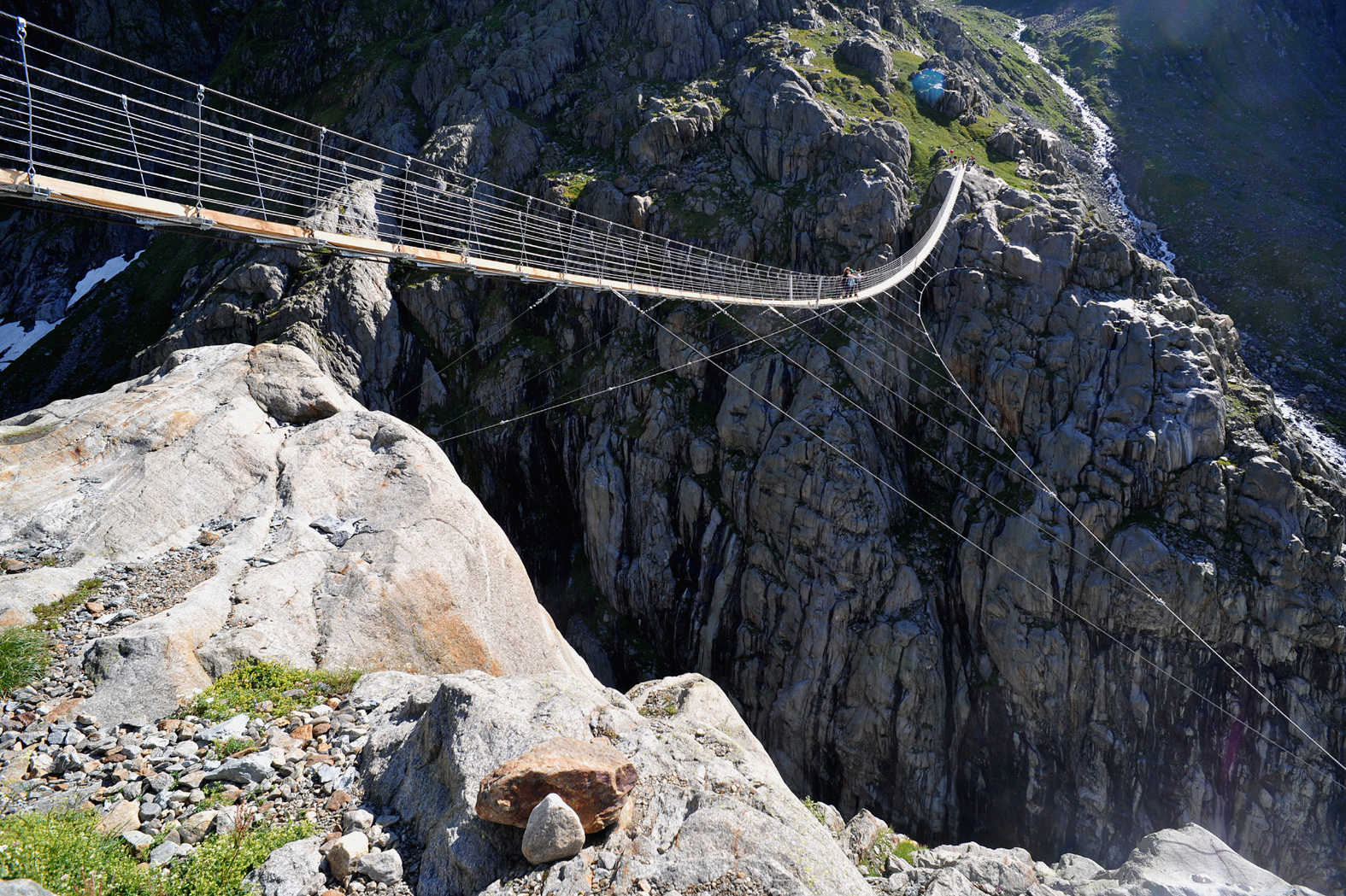 Located high up above the Trift Lake that was formed by surrounding glaciers, the spectacular Triftbrücke opened in June of 2009 as a replacement for an earlier catenary suspension bridge constructed in 2005. The first bridge became an instant tourist attraction despite the remote location that requires a ride up a cable car known as the Triftbahn and then a 90 minute hike to the bridge. The first span was suffering from wind related damage as well as entry points that required hiking along dangerous cliffside paths that were exposed to the elements. So in 2008 the local power company Grimsel decided to replace the first bridge with a more structurally substantial one at a more accessible location about 100 feet (30 meters) higher in elevation. The older 2004 bridge was 230 feet (70 meters) high while the 2009 bridge is 328 feet (100 meters) high. The span length was also increased from 328 feet (100 meters) to 558 feet (170 meters). The newer bridge looks similar to the old one but the handrails are higher and there are stabilizing cables to prevent strong oscillations from the wind.

You can read more about the construction of both the 2009 and 2005 bridges and watch 3 excellent videos that cover the entire construction process from the first cable being pulled across the gorge by a helicopter to the final placing of wood planks on the walkway: http://www.trift.ch/bruecke2009/ 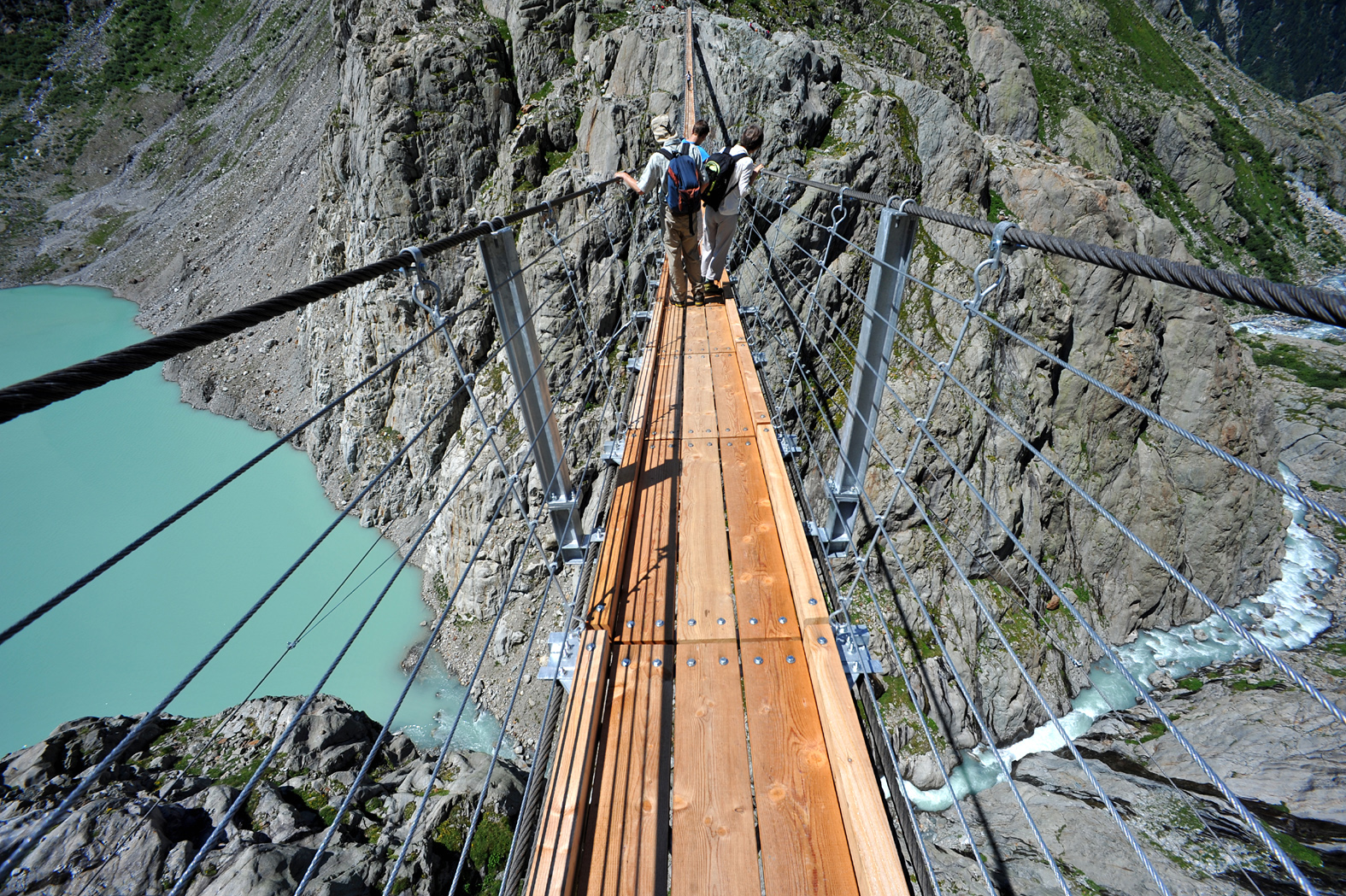 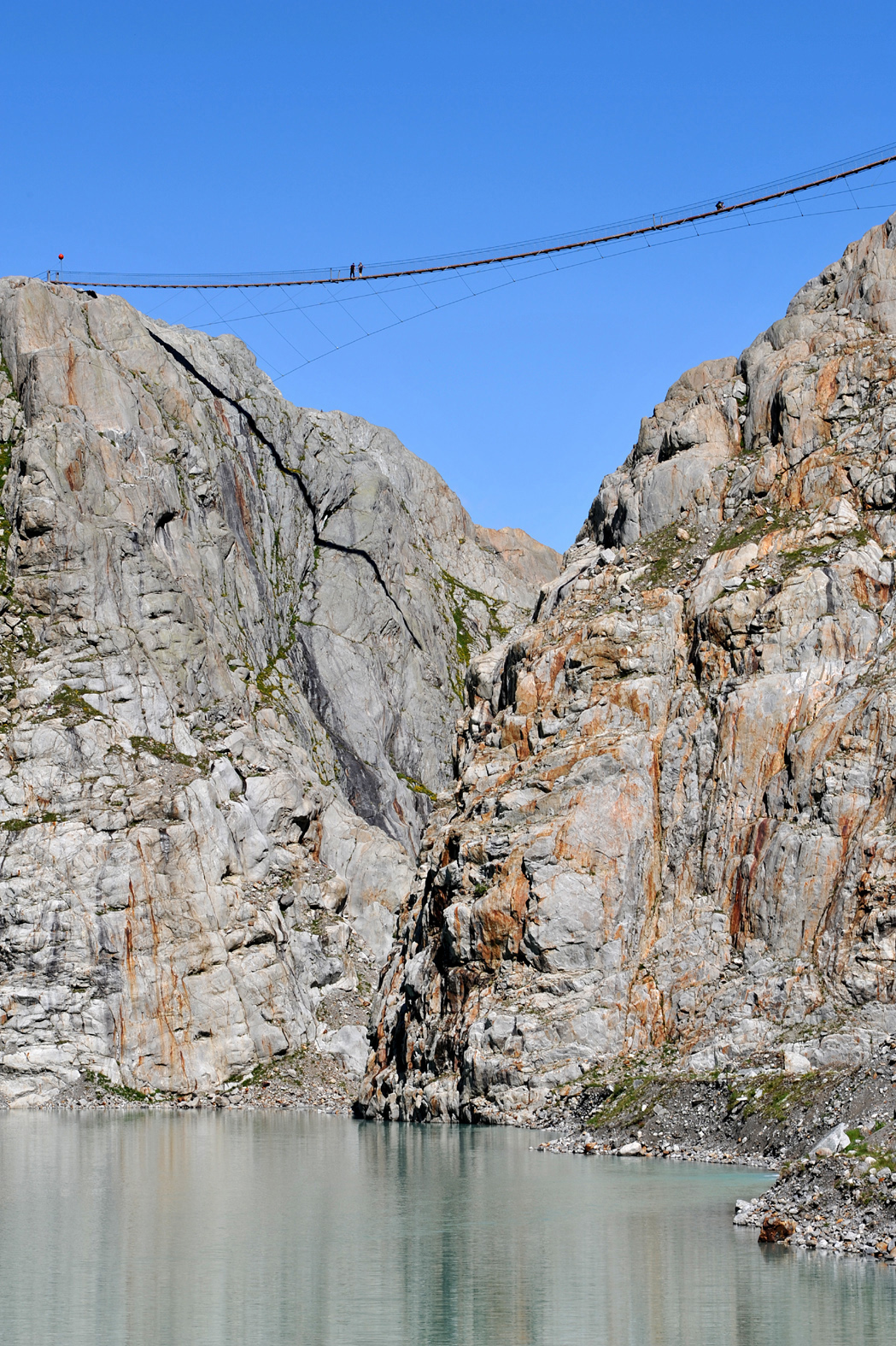 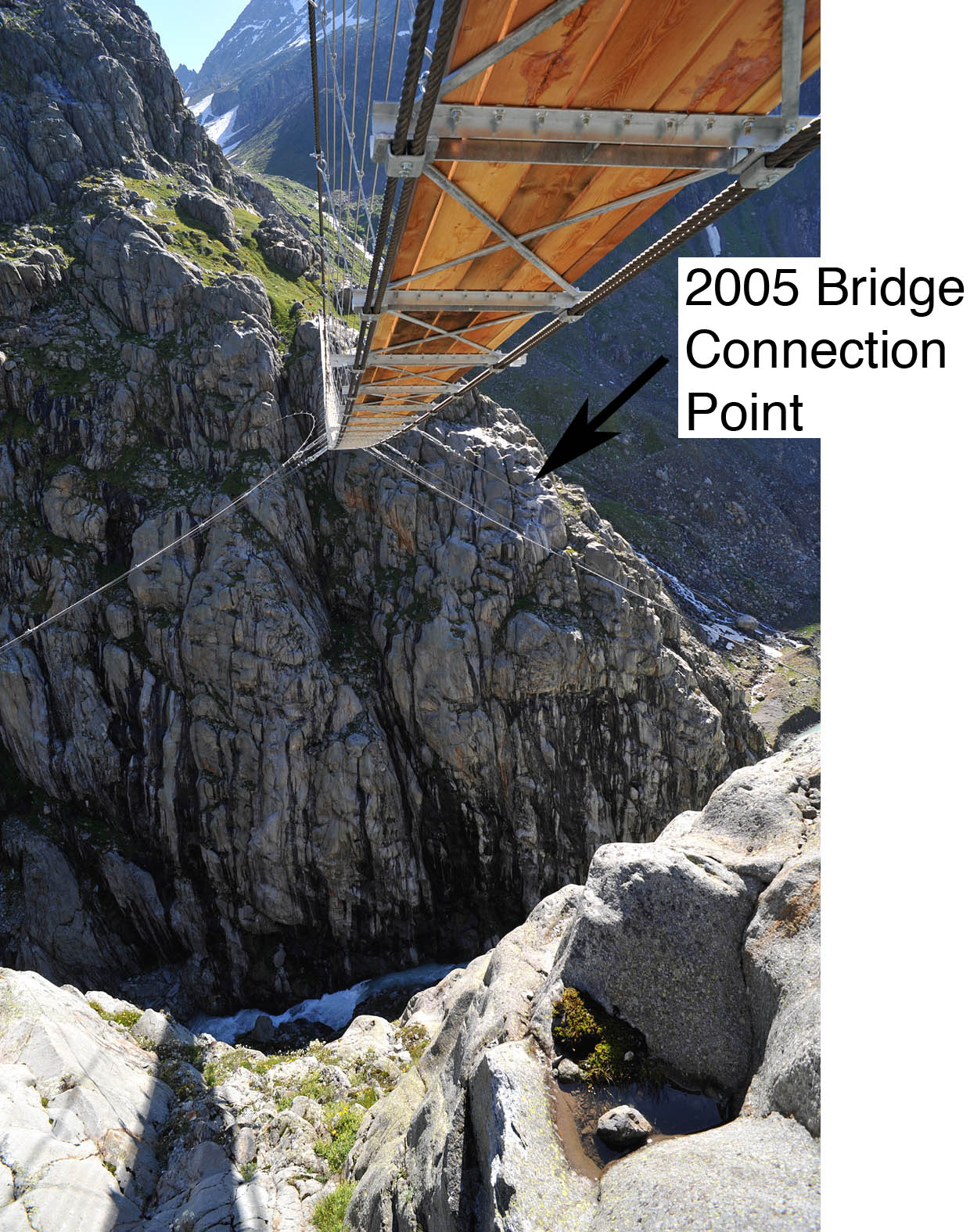 A view showing the lower connection point of the first bridge on the far canyon wall. Image by Xpiowa. 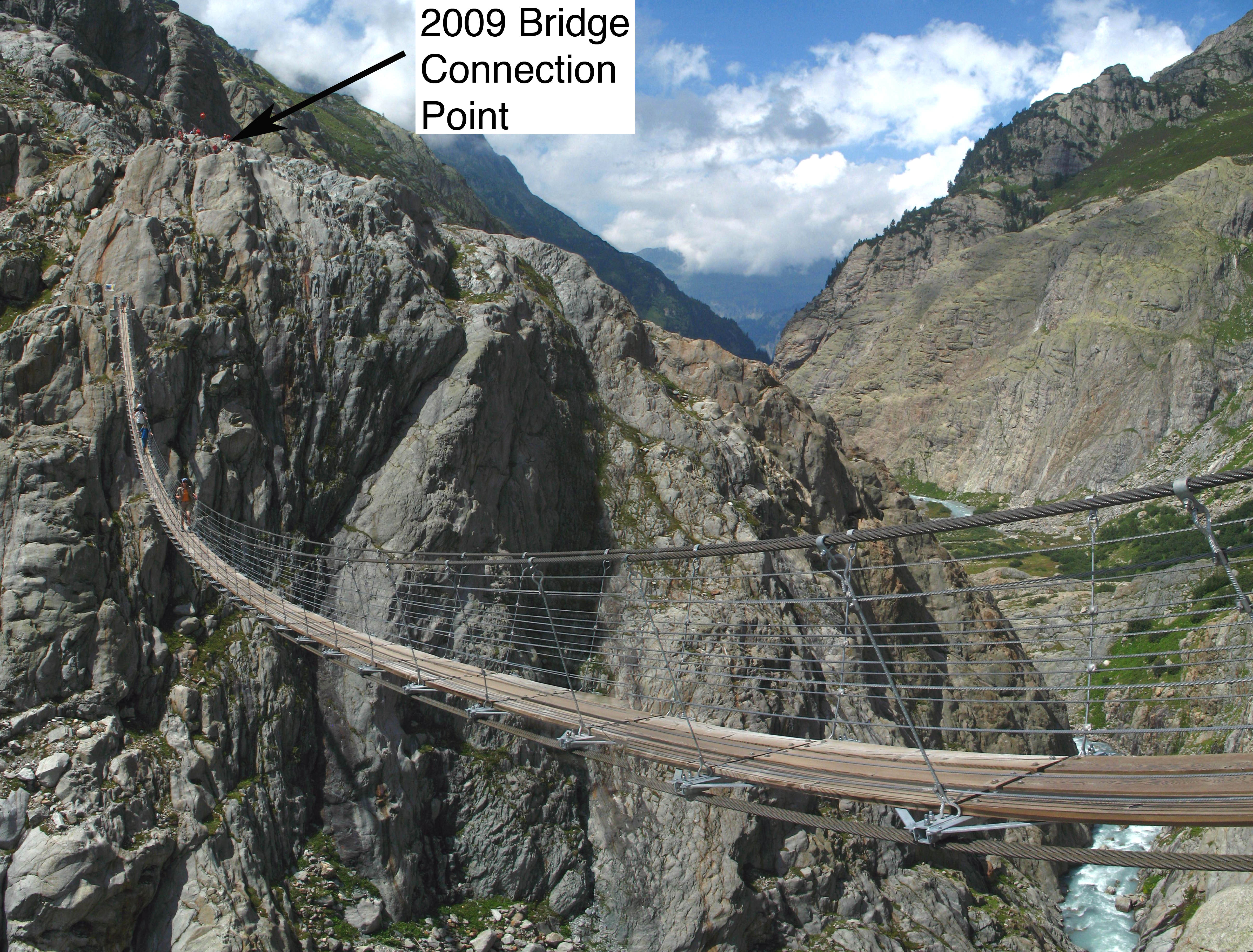 An older view of the now defunct 2005 bridge showing the connection point of the yet to be constructed 2009 span. Image by Thisisbossi. 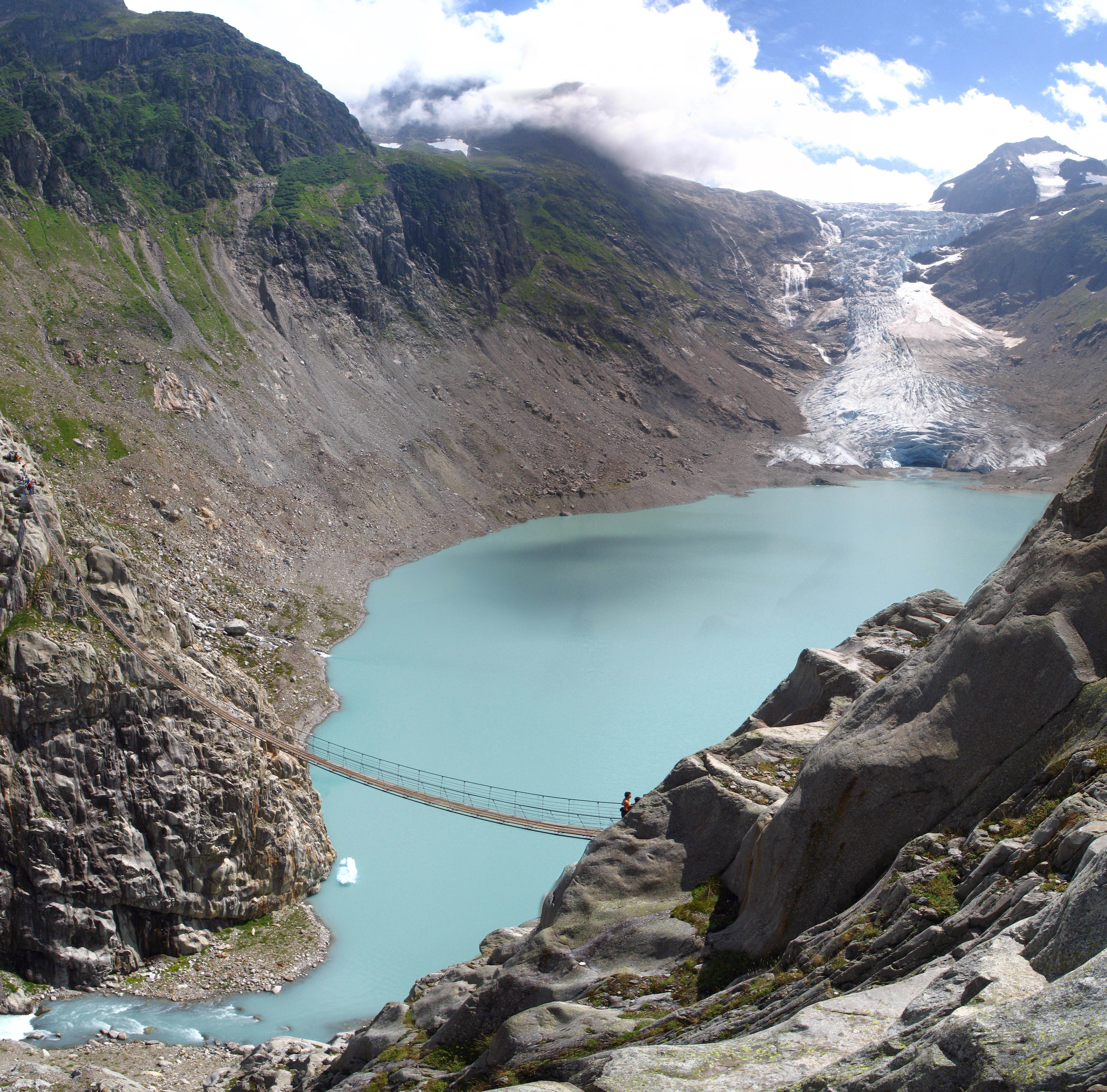 A view of the 2005 span with Trift Lake in the background. Image by Thisisbossi. 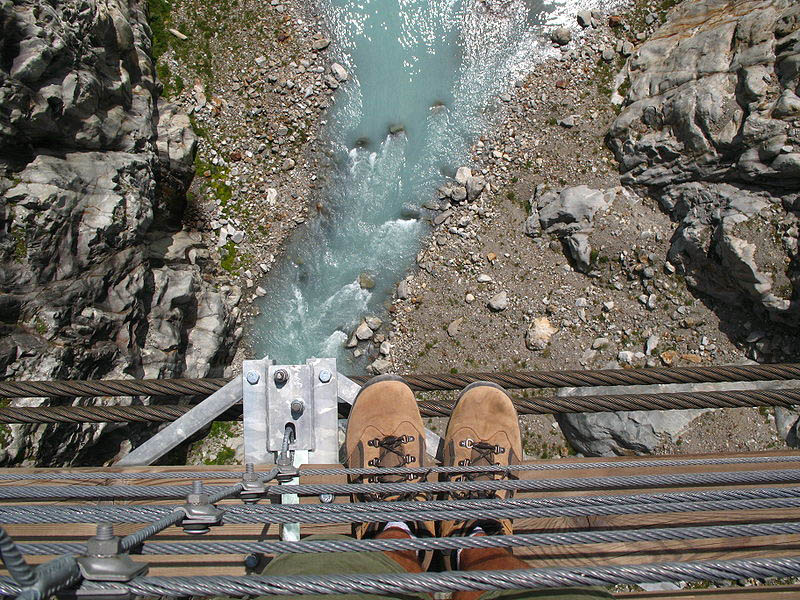 The original bridge was 230 feet (70 meters) above the river. Image by Thisisbossi. 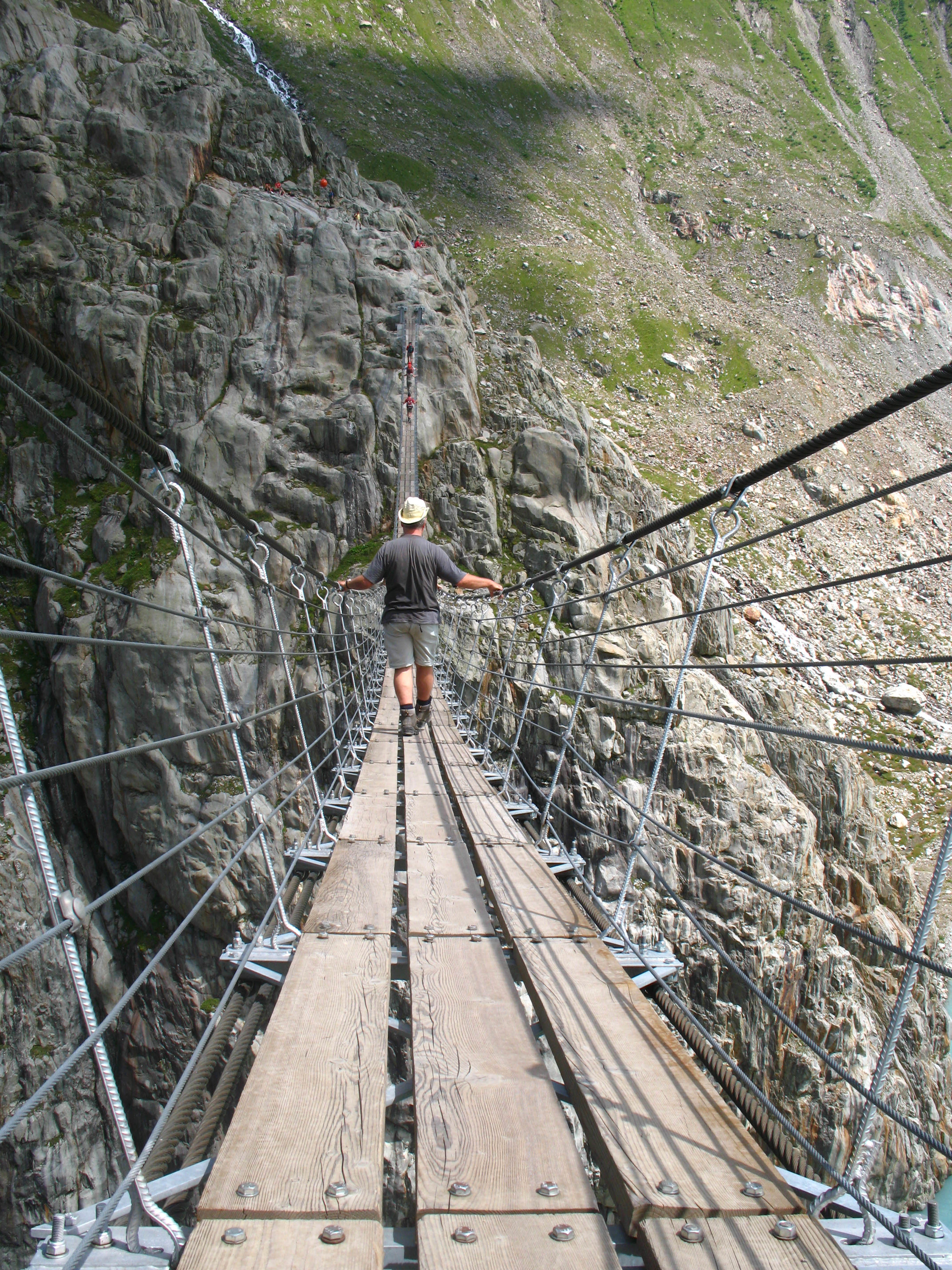 The 2005 Triftbrücke had no wind stay cables. Image by Thisisbossi. 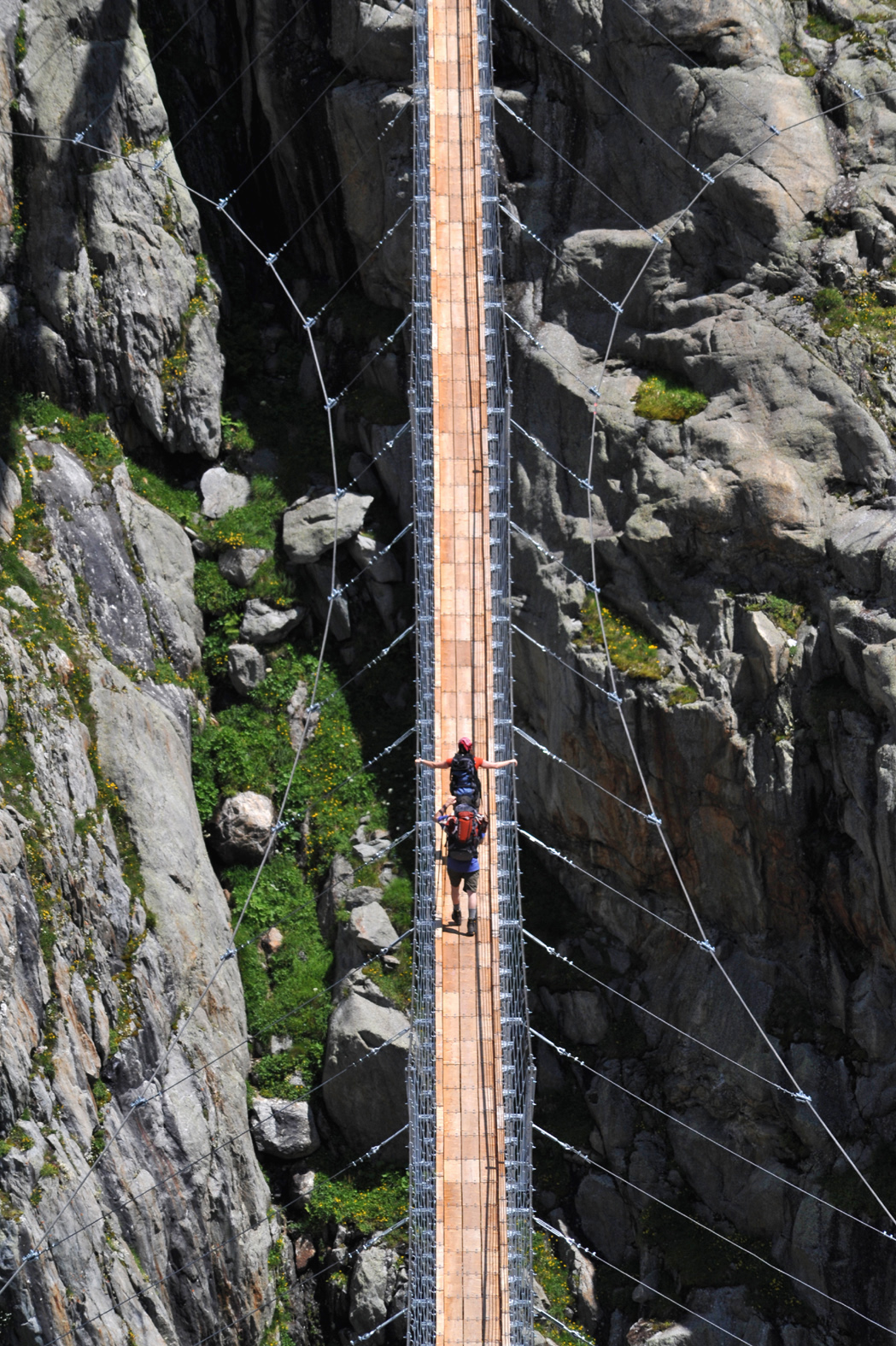 The webbing of the wind stay cables is evident in this view of the 2009 Triftbrücke. Image by Xpiowa. 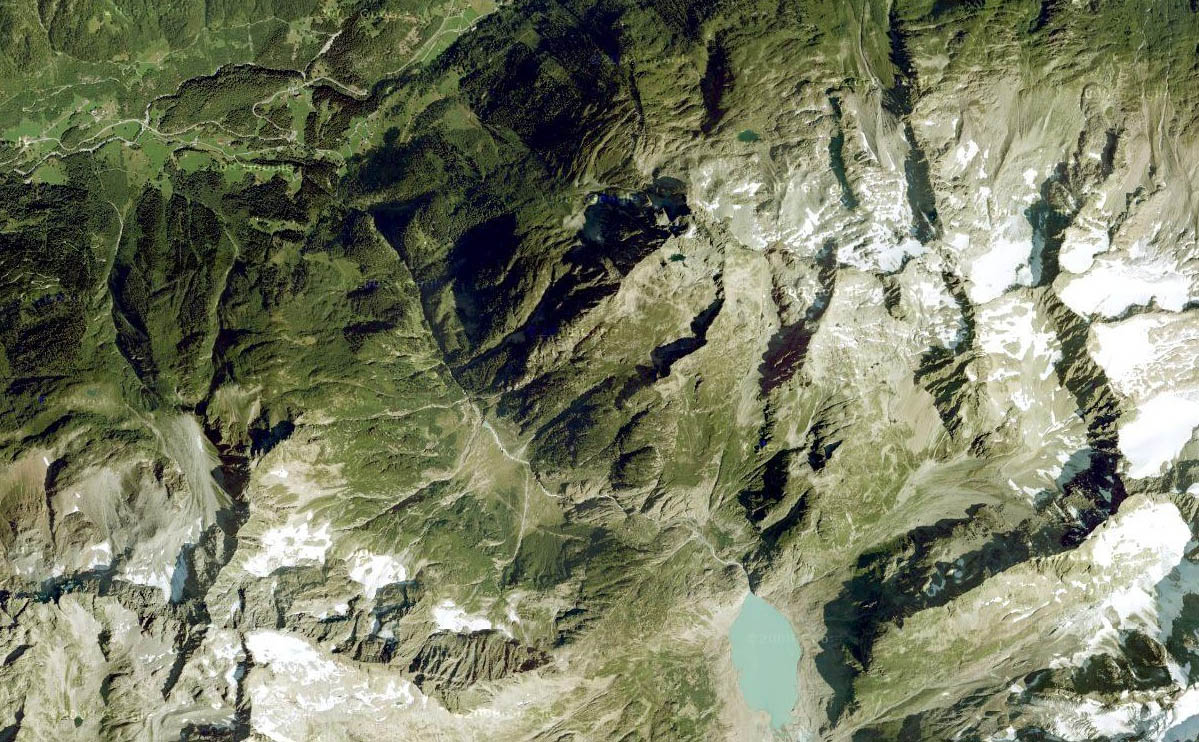 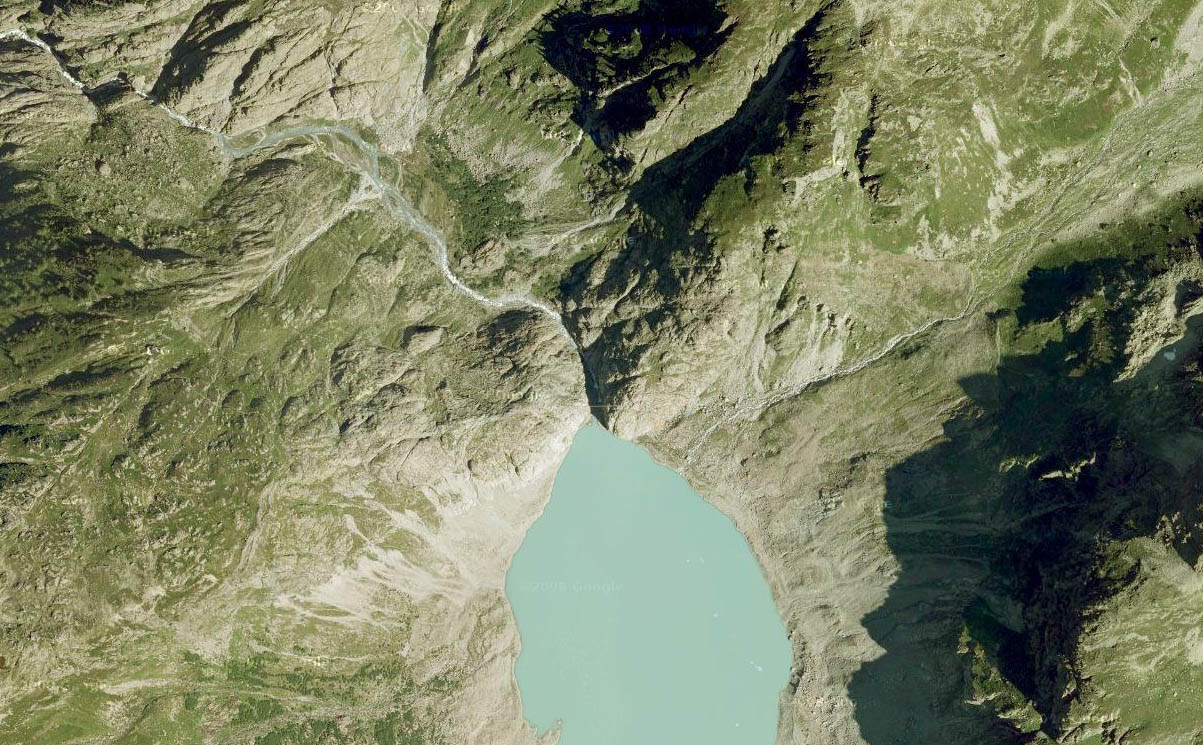 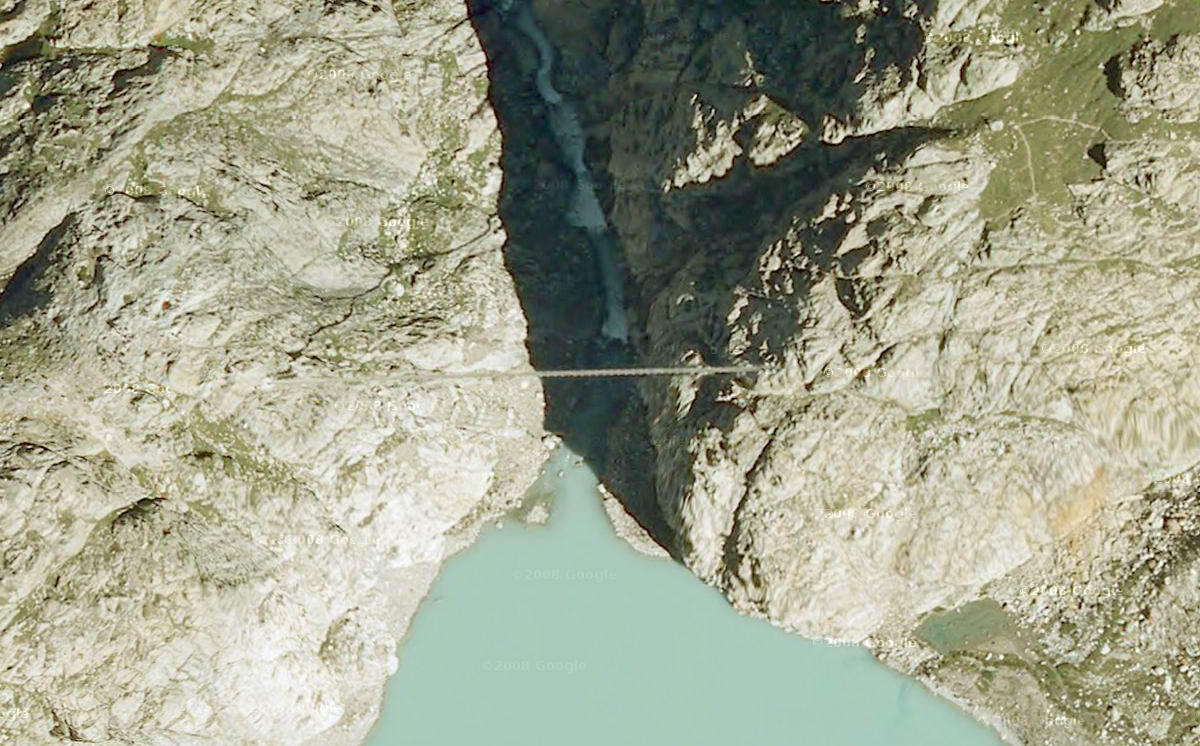 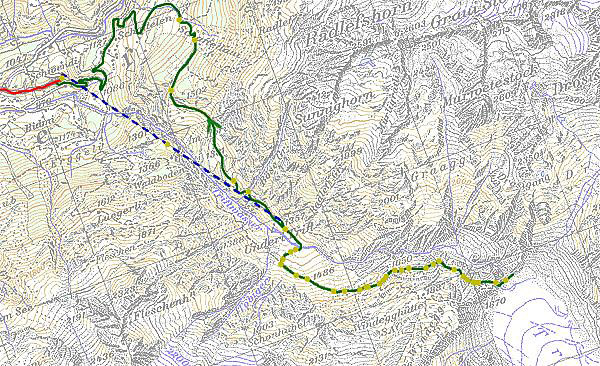 A detailed topo map of the Triftbahn and the trails to the bridge. 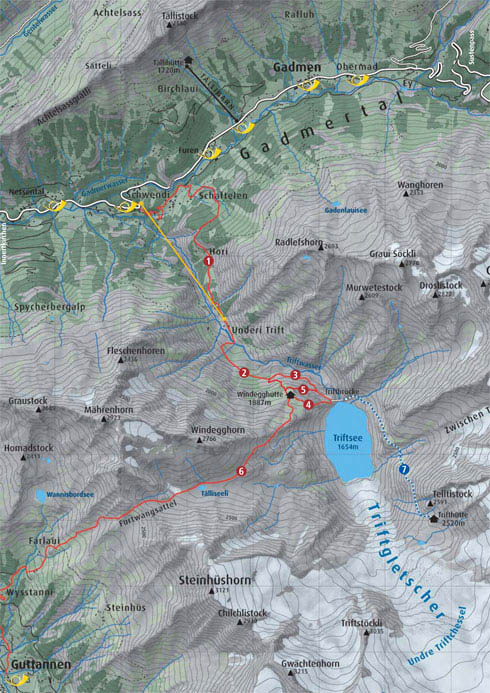 A local map of the region shows the Triftbahn in yellow and the trails in red. 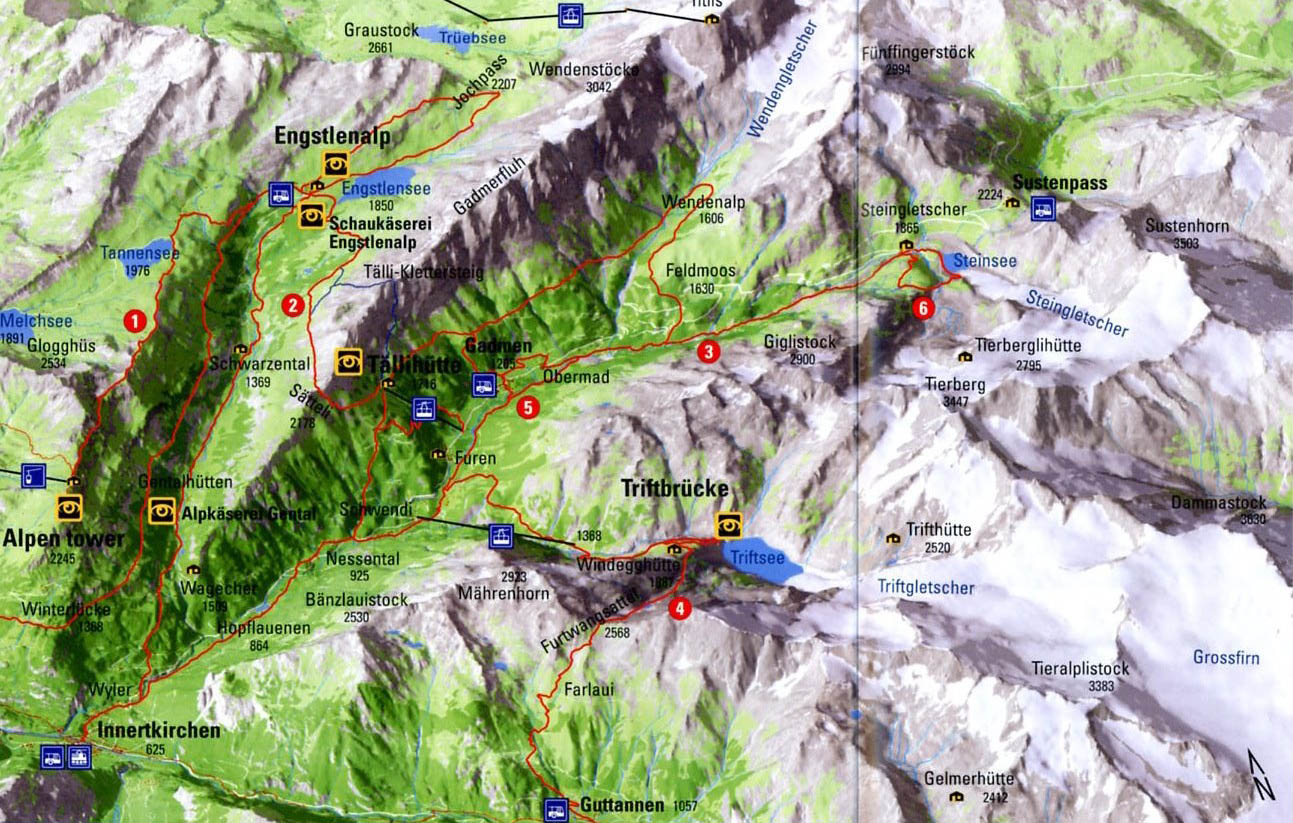 A regional map showing the many trails that wind throughout several nearby mountain ranges. 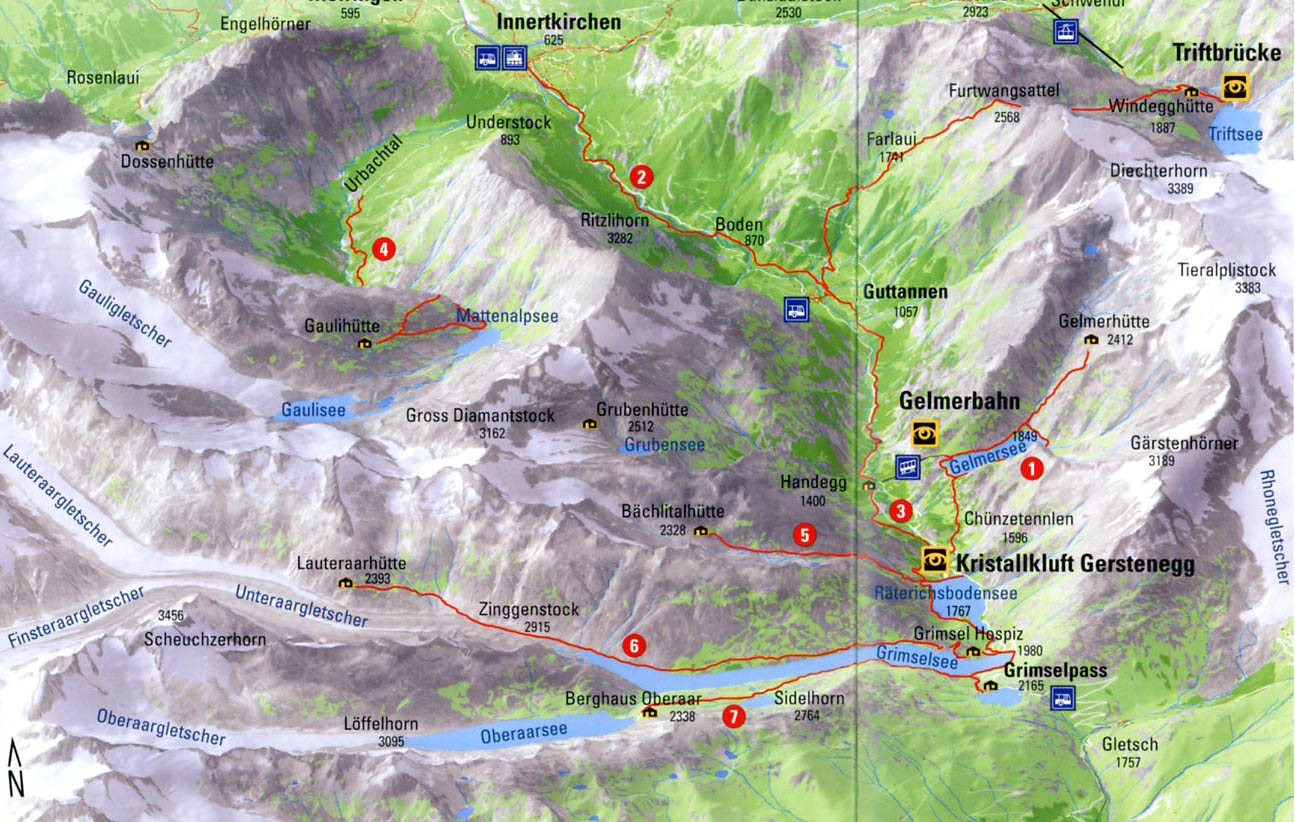