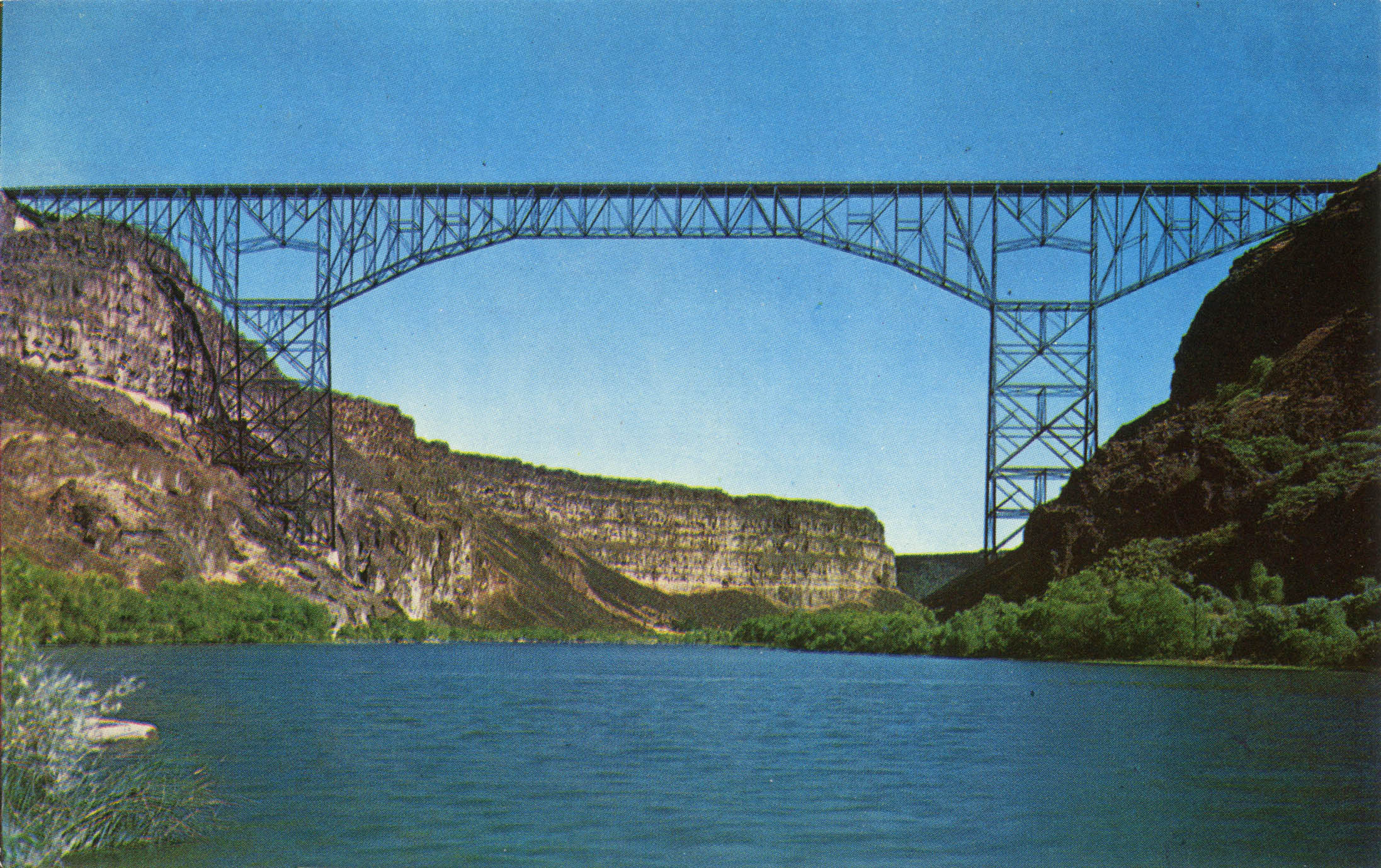 Upon its completion in 1927, the Twin Falls-Jerome bridge was the third highest in the world, exceeded only by the Sidi M’Cid suspension bridge in Constantine, Algeria and the 1839-built Charles Albert suspension bridge at Allonzier-la-Caille in the Rhône-Alpes region of France. All three would be surpassed in 1929 by the Royal Gorge bridge in the U.S. state of Colorado. The huge Twin Falls cantilever lasted almost 50 years before it was replaced by the current Perrine arch bridge.

Like many cantilever bridges of the era, the Twin Falls-Jerome was a busy structure filled with a hodge podge of steel beams connected to form triangular shaped panels that were then subdivided into even smaller panels. The two main towers stood 370 feet (113 mtrs) from top of foundation to road deck. Protruding out of each tower were river arms measuring 225 feet (69 mtrs) in length. A suspended span of 250 feet (76 mtrs) hung between them for a total main span of 700 feet (213 mtrs). The bridge contained 98,750 pieces weighing a total of 2,900 tons.

Twin Falls-Jerome was not the first high bridge to be built in the area. That distinction belongs to the original 345 foot (105 mtr) high Hansen suspension bridge. Located 8 miles (13 kms) upstream from Perrine, it was the highest bridge in North America from 1919 until 1927 when the Twin-Falls Jerome bridge surpassed it. In 1966 the suspension span was replaced by a new steel girder Hansen bridge with two concrete piers that descend all the way to the bottom of the canyon.

Soon after the original Hansen suspension bridge was completed, its construction engineer R. M. Murray started to look into another crossing of the Snake river at Twin Falls. It took several more years before funding was available for the new bridge but once construction began in November of 1926, it was just under a year before it was completed in time for the Jerome county fair in September of 1927. Tolls were just 60 cents. The engineering plans refer to it as the Blue Lakes bridge, an area in the gorge where rancher I.B. Perrine settled. Although most people only refer to the current bridge as the Perrine, the name was carried over from the 1927 Twin Falls-Jerome bridge which had been renamed the Perrine Memorial bridge in 1940 after the bridge had become part of the Idaho state highway system. 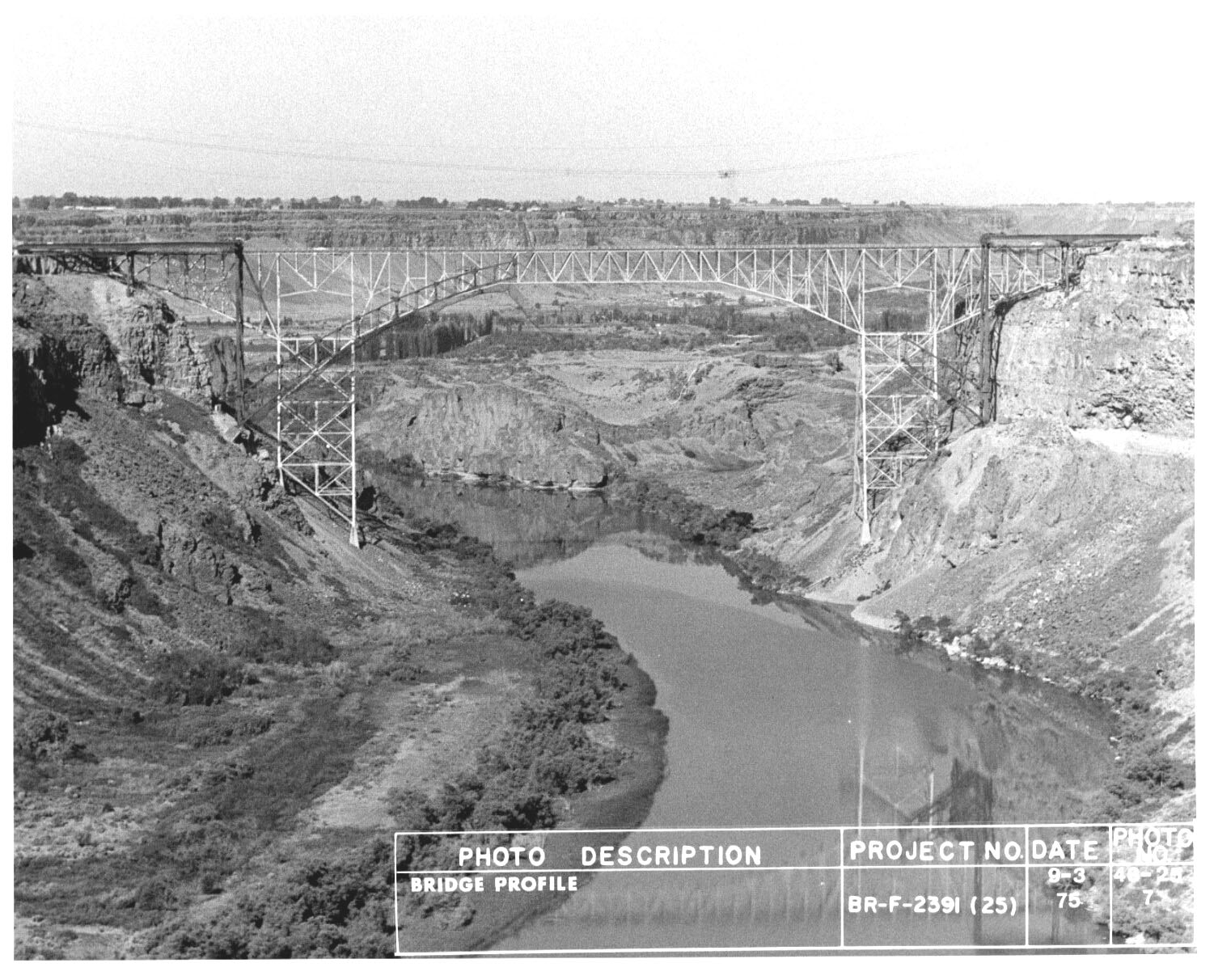 A construction photo from 1975 shows the new arch rising next to the 1927 bridge. Image by Idaho Department of Transportation.

Perrine and Twin Falls-Jerome bridges side by side 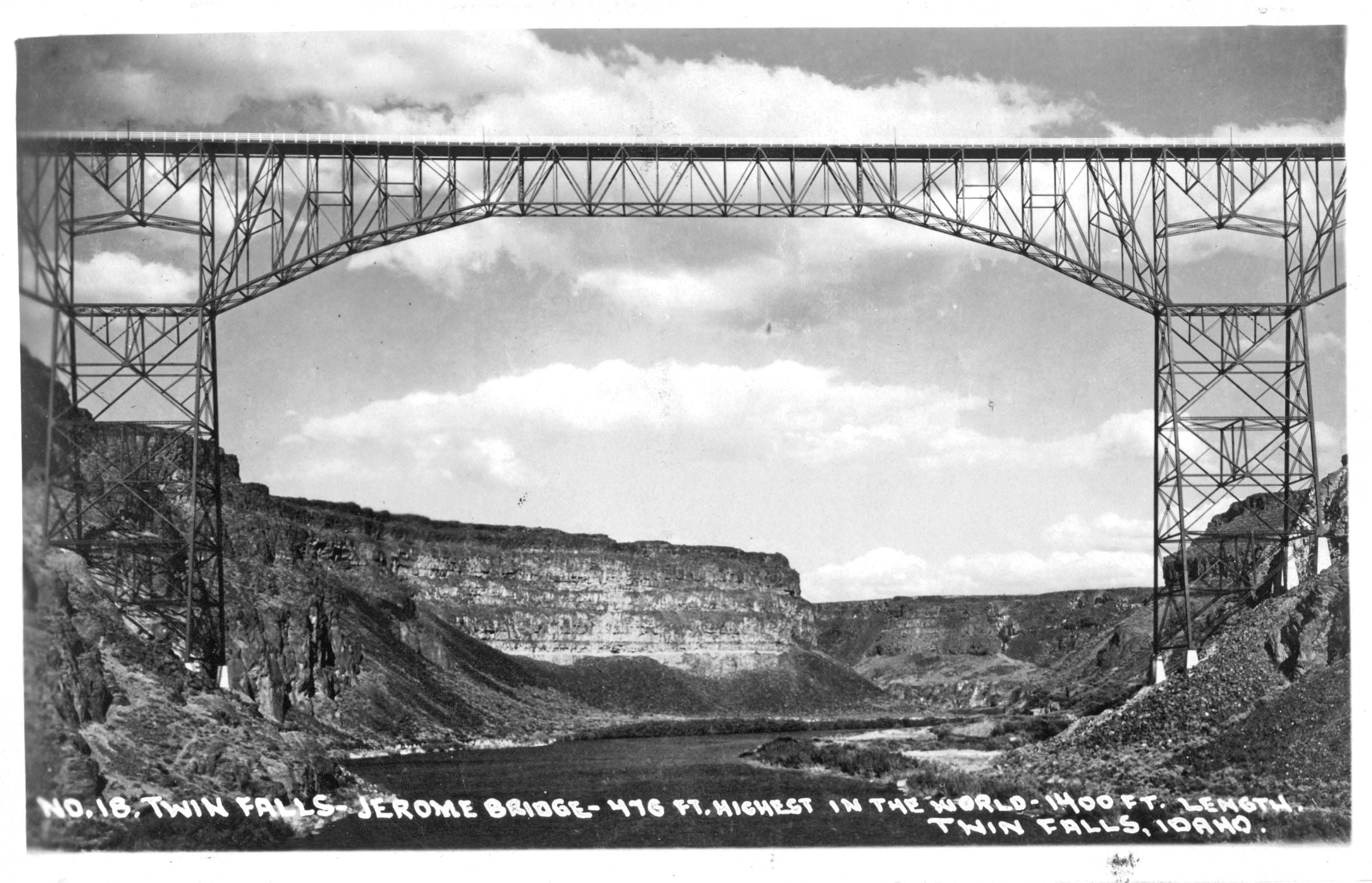 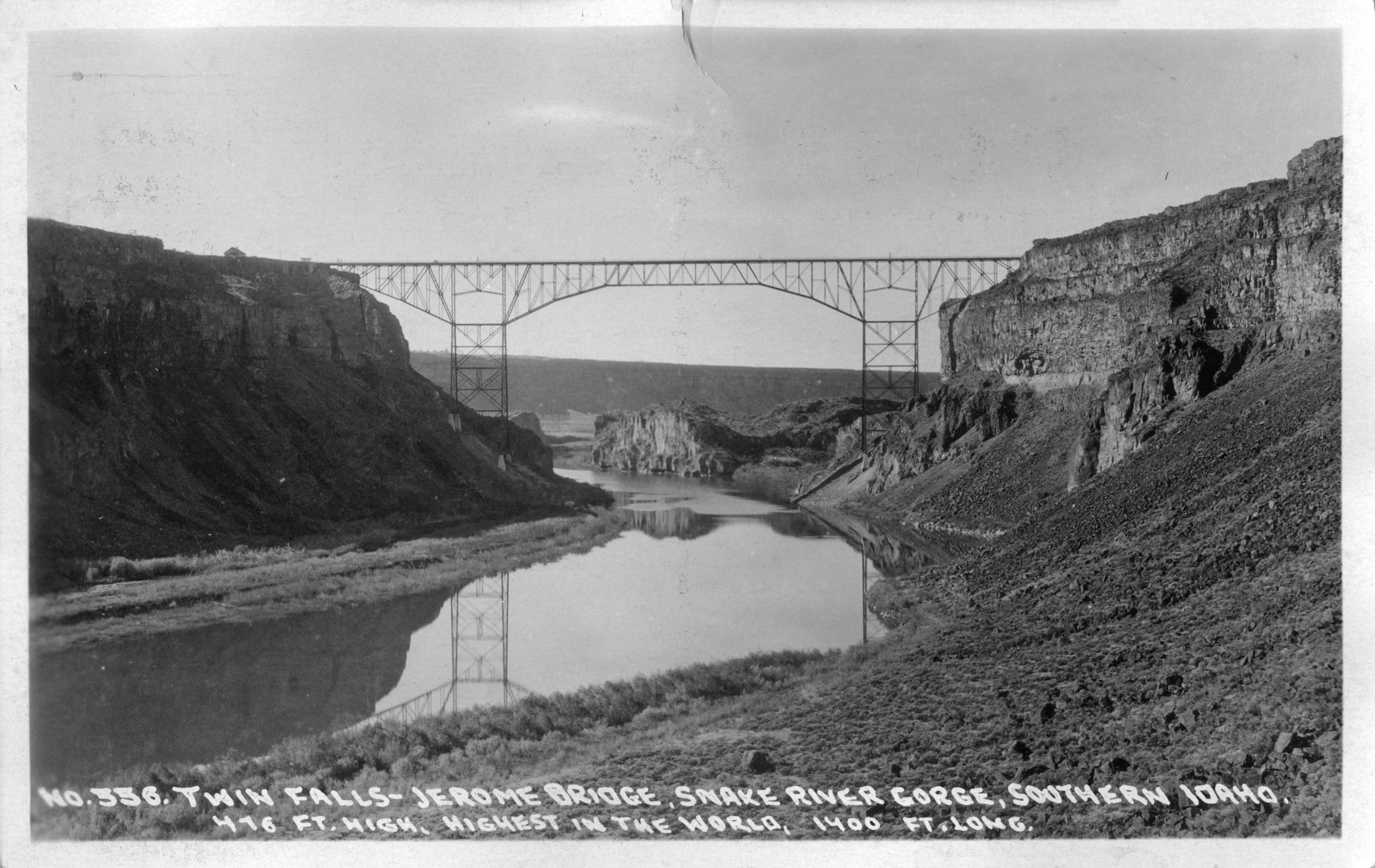 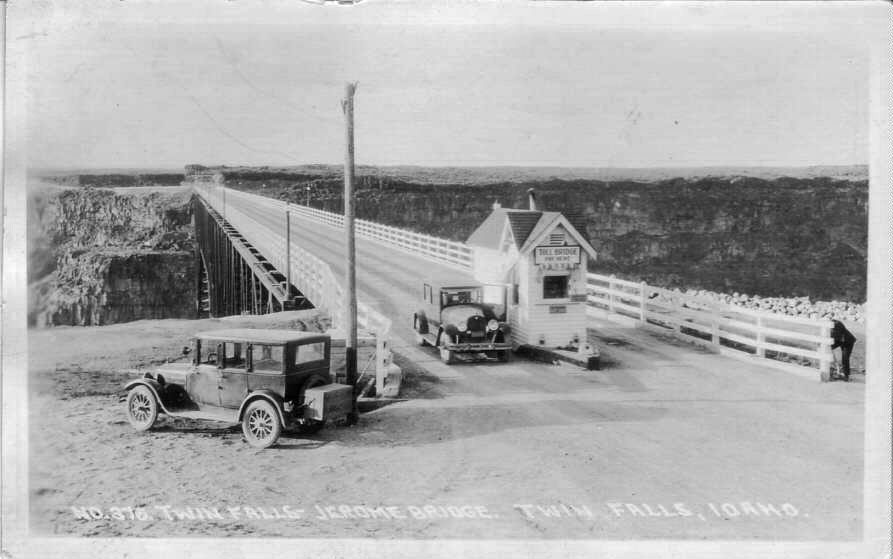 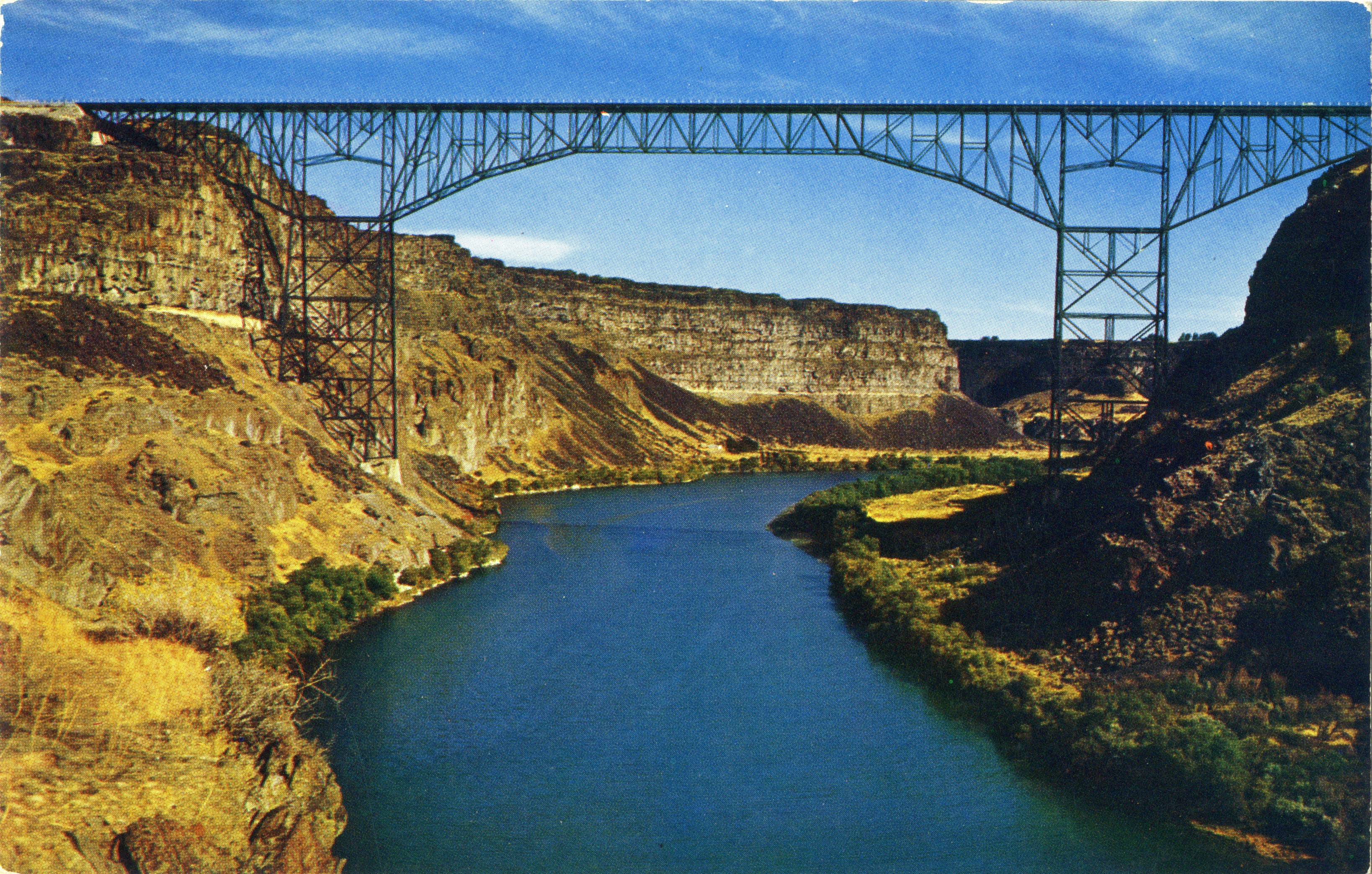 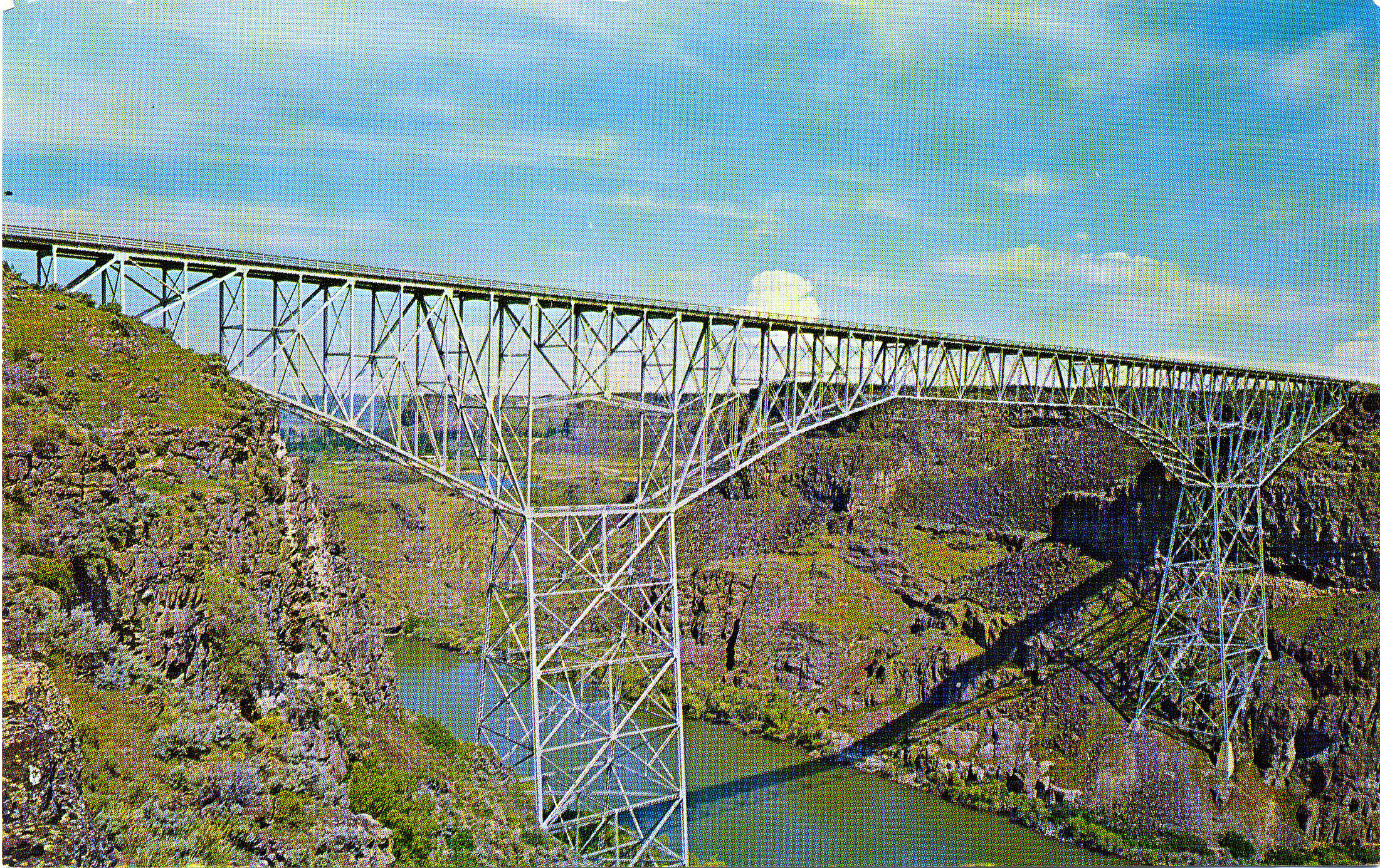 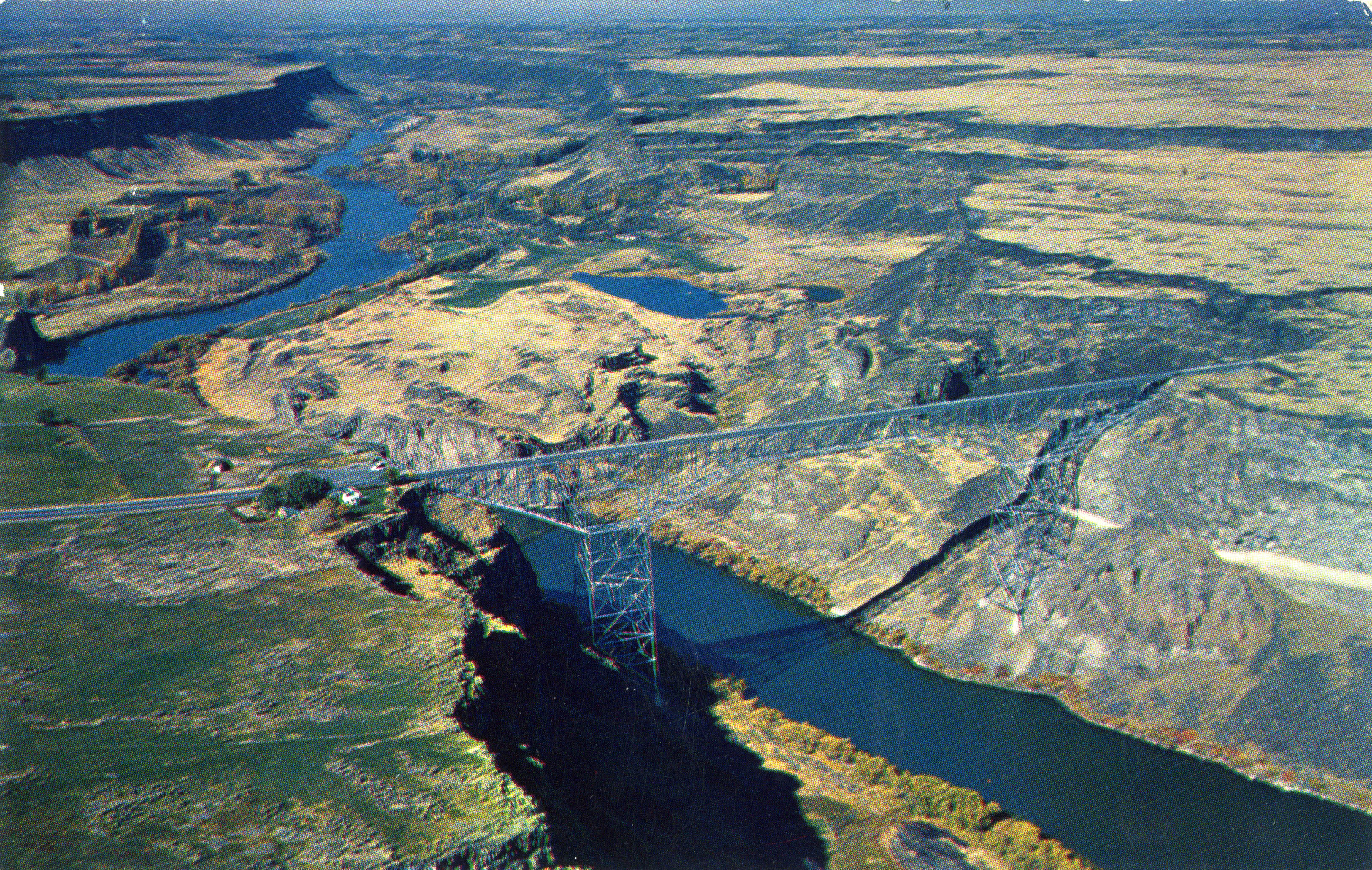 Twin Falls-Jerome Bridge aerial postcard. Note the open plateau on the south end of the bridge. Today it is covered with stores, restaurants and parking lots. 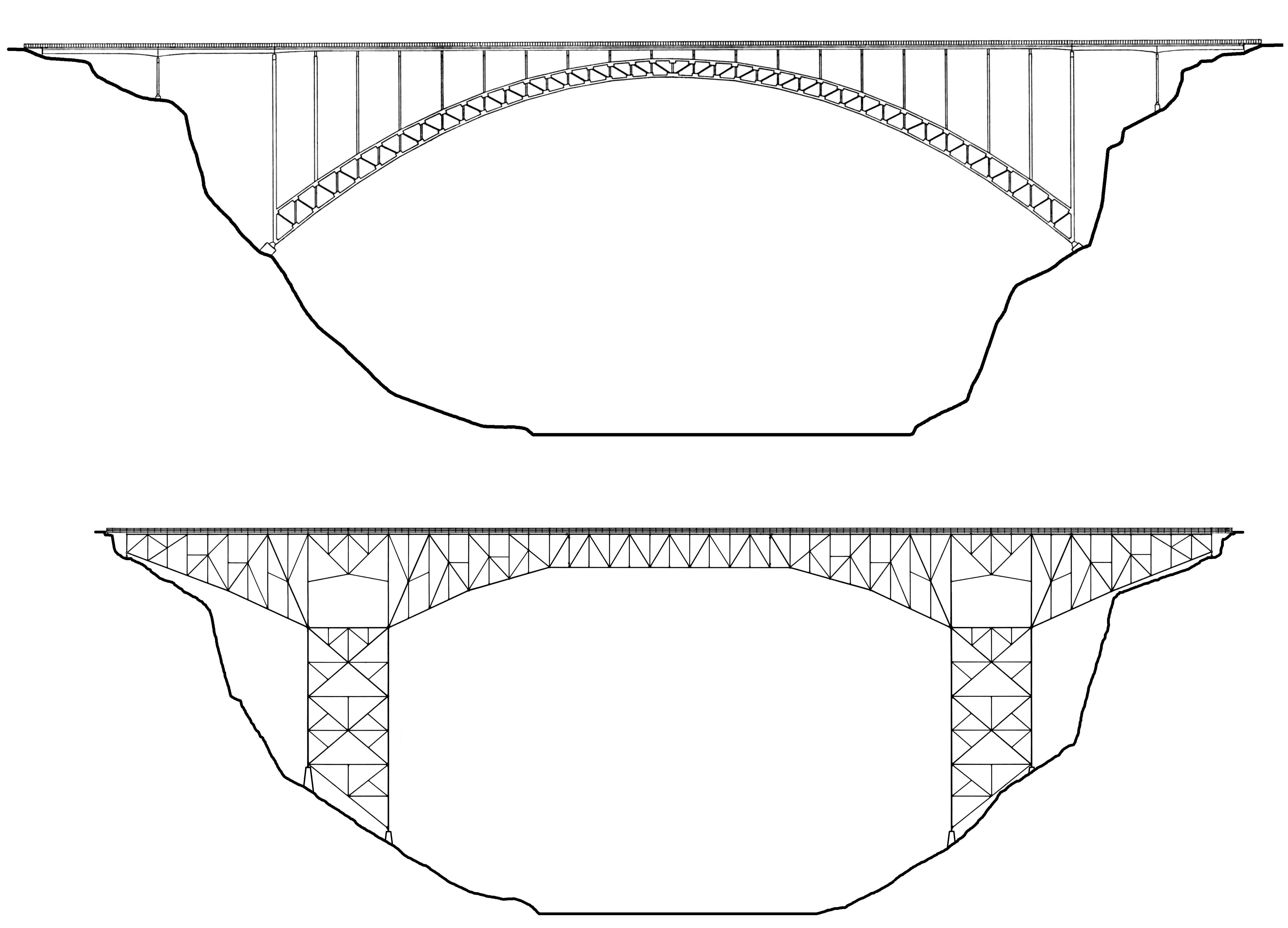 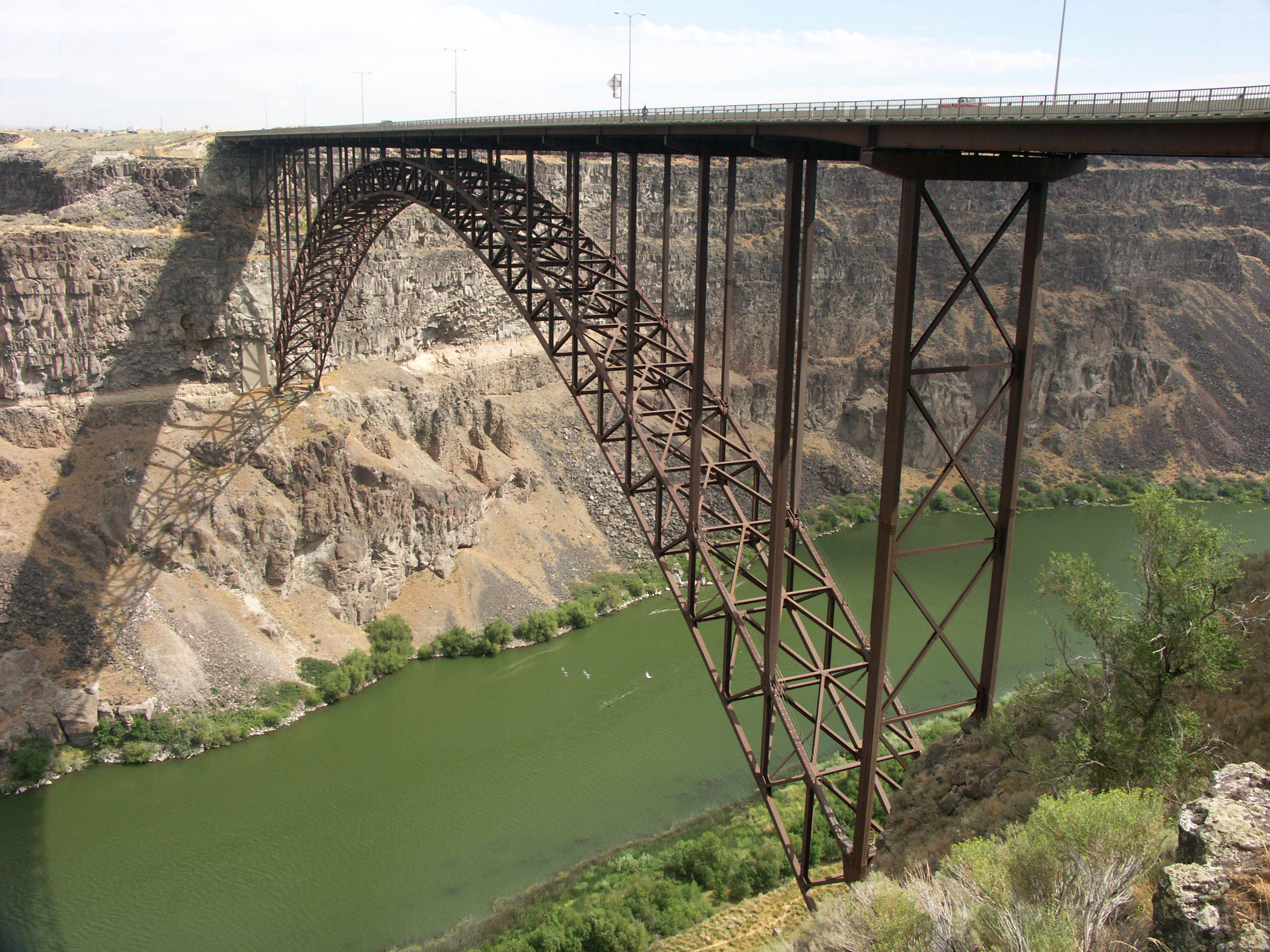 A steel arch replaced the original cantilever bridge in 1976. You can see more images of the current span under the Perrine Bridge entry. Image by Eric Sakowski / HighestBridges.com 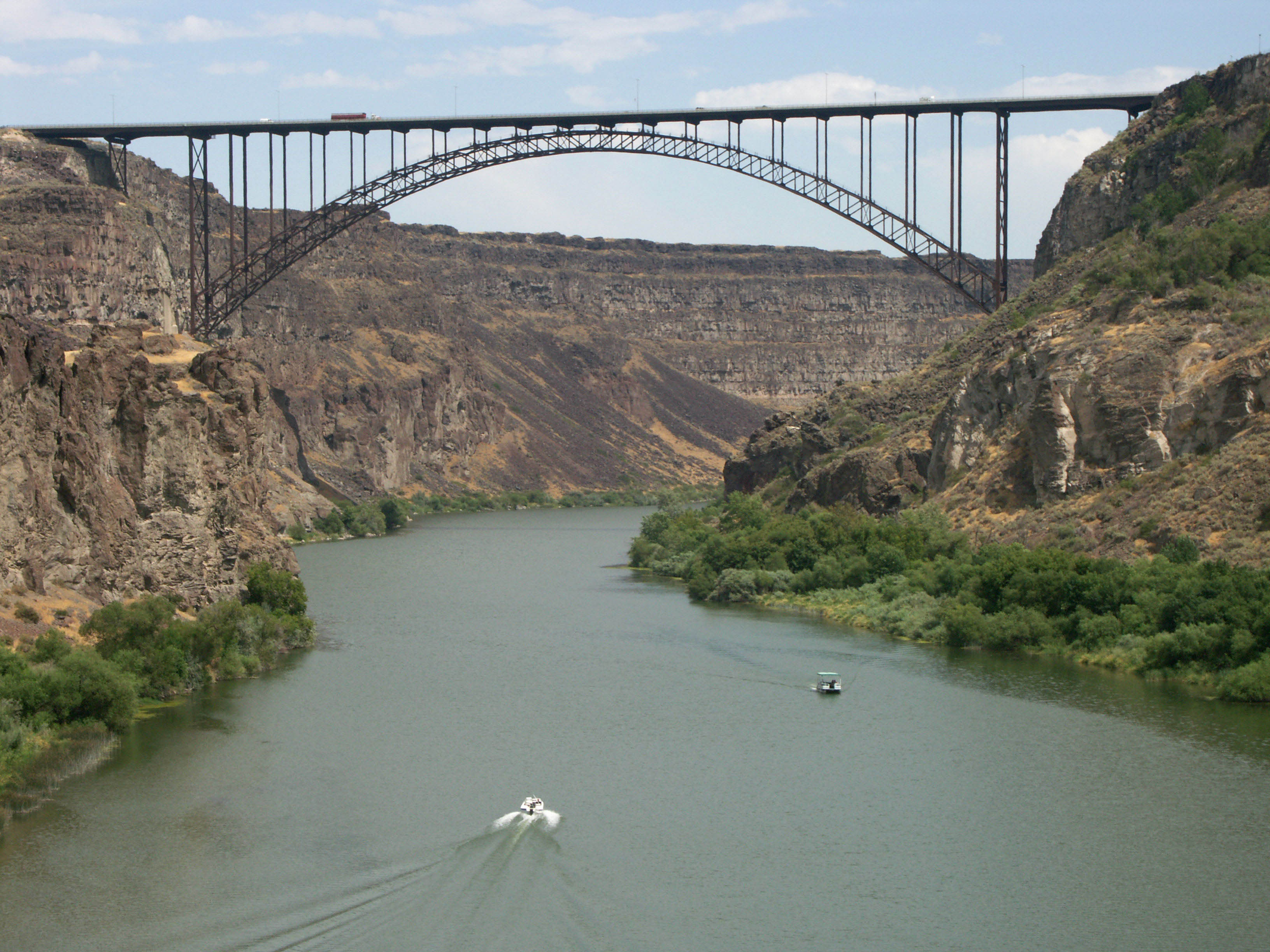 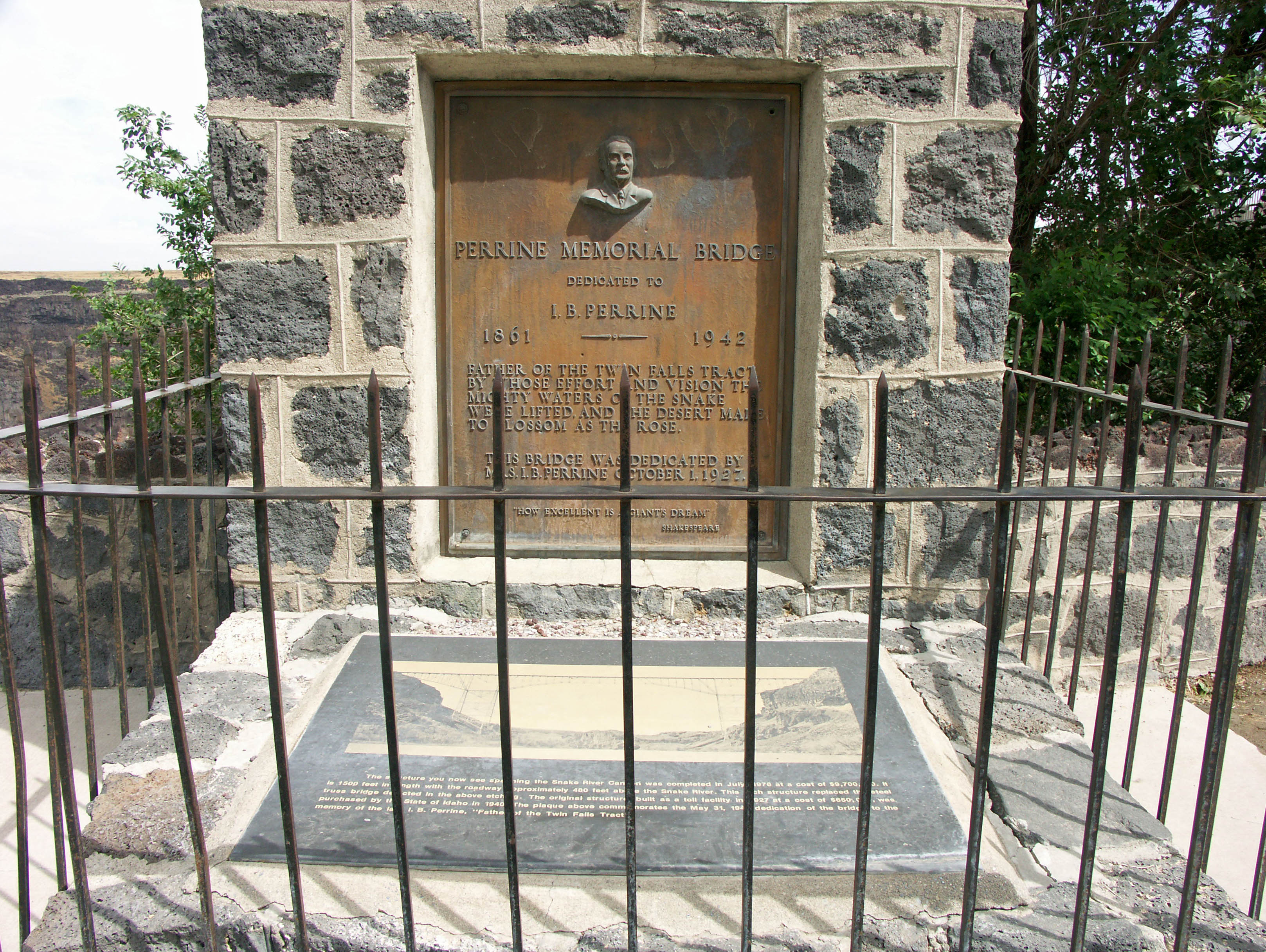 Memorial to I.B. Perrine as well as the current and previous Twin Falls-Jerome Bridges on the south side of the Snake River canyon. Image by Eric Sakowski / HighestBridges.com 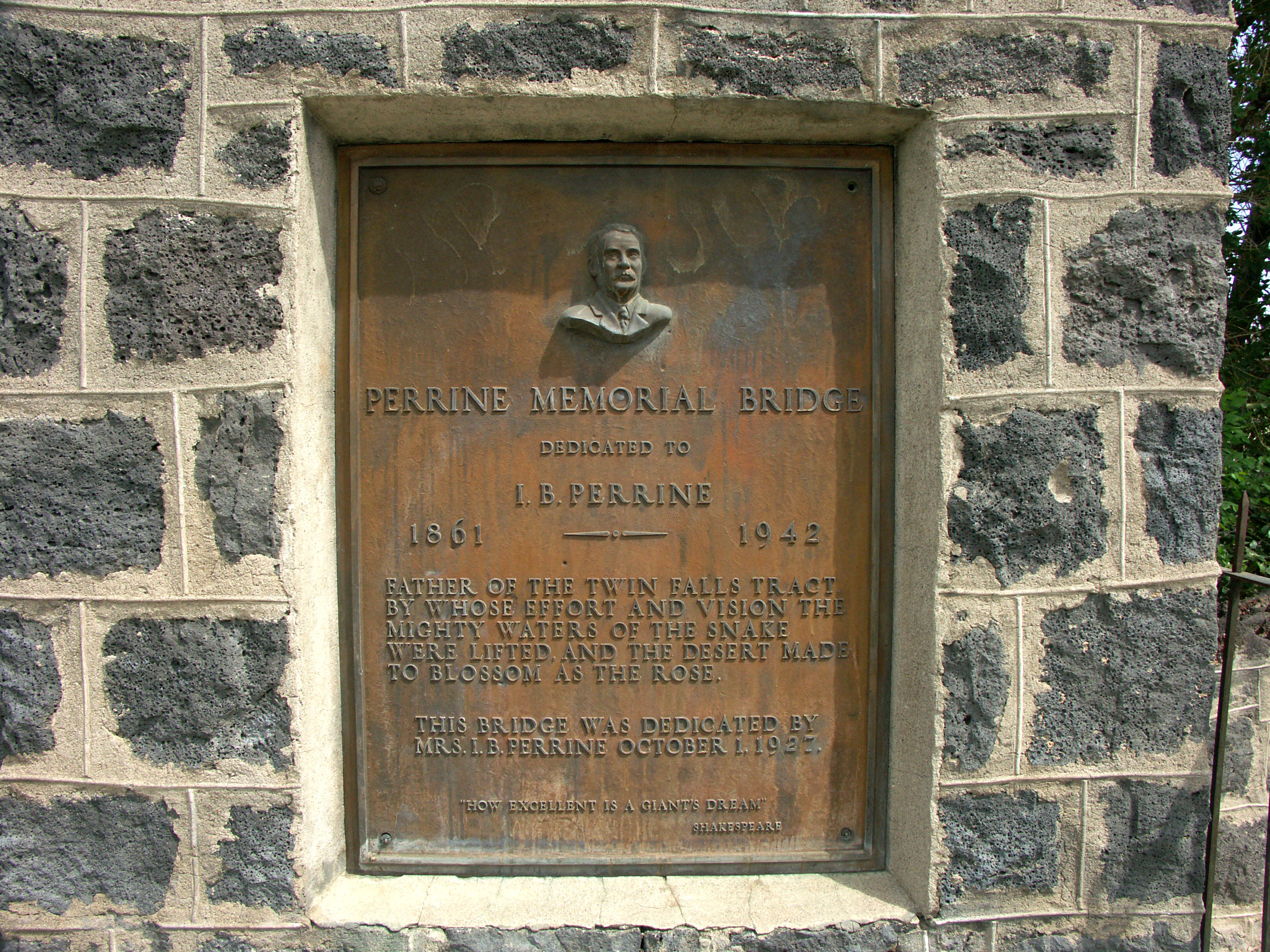 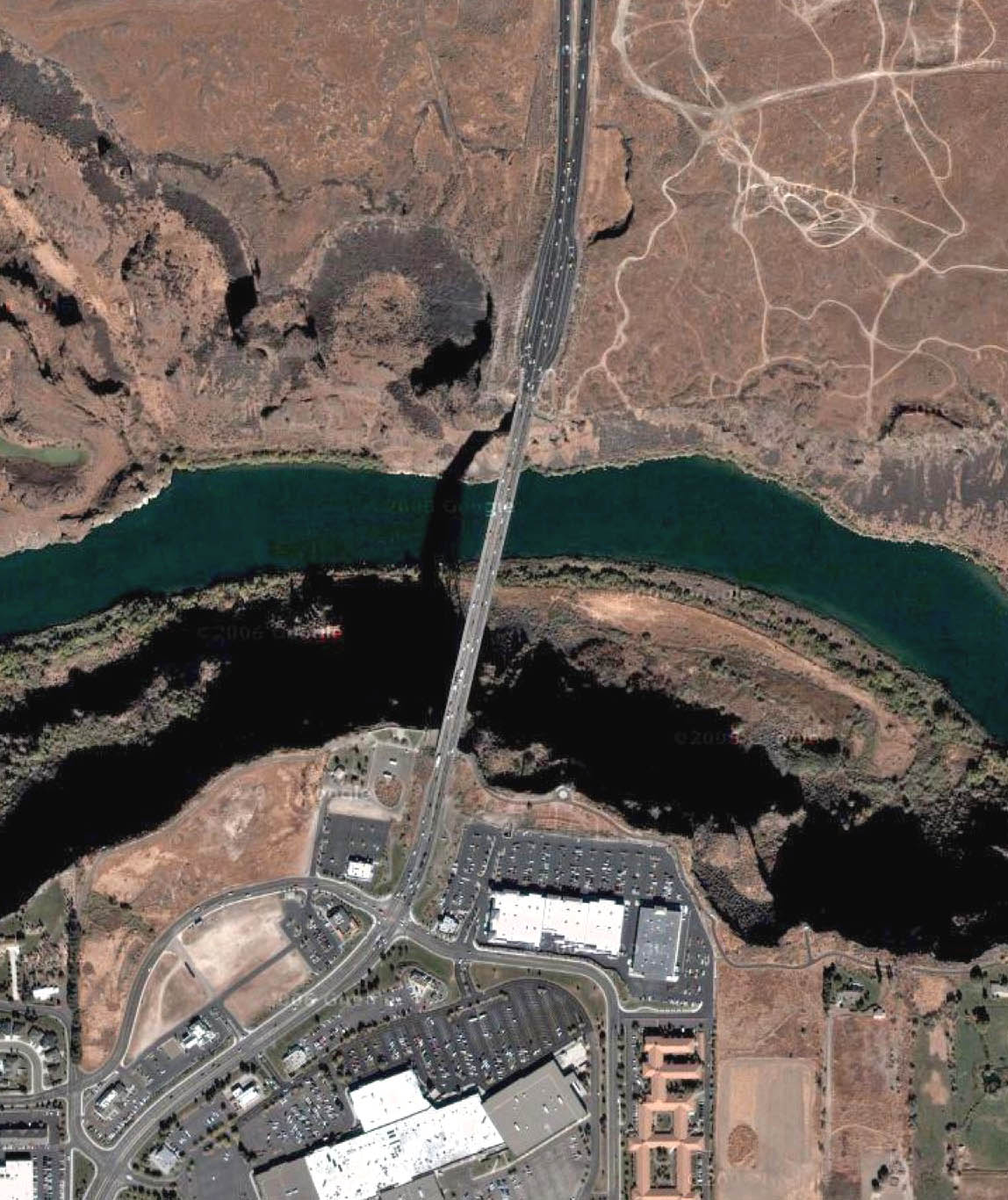