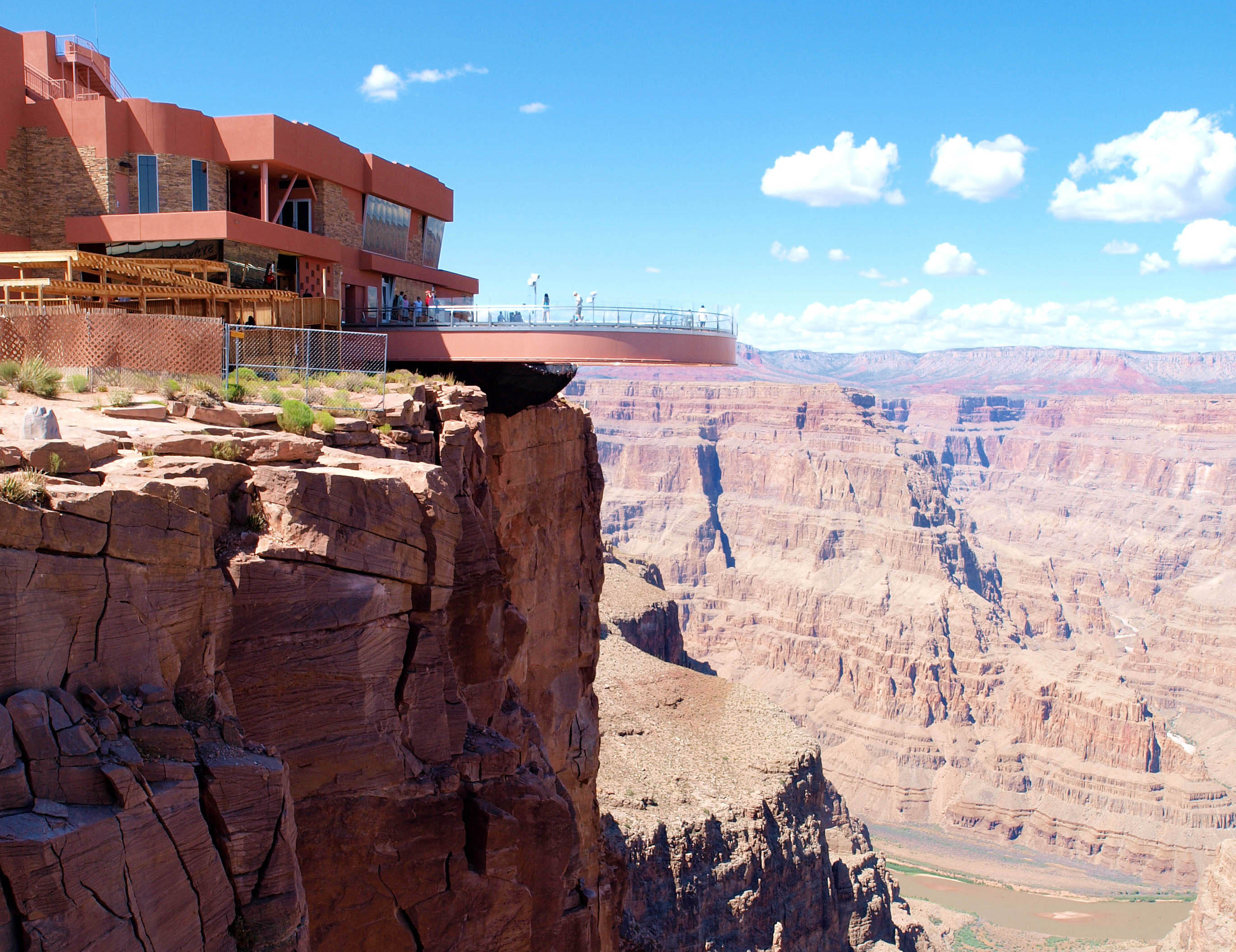 Image by Timothy Allen, aka "Flyingtoolman".

Located on a magnificent cliff overlooking the western edge of the Grand Canyon is the Skywalk. Opened in 2007 on the Hualapai Indian Reservation about 120 miles (193 km) from Las Vegas, the unique U-shaped “glass bridge” is a partially enclosed walkway that cantilevers 70 feet (21 mtrs) out above a 720 foot (219 mtr) high cliff. This “bridge to nowhere” is a spectacular bit of engineering even if it does not fit everyone’s definition of what a bridge is. If categorized as a footbridge, the Skywalk is the highest of its type in the world.

The walkway itself is composed of two parallel box beams each 6 feet (2 mtr) deep and 32 inches (81 cm) wide. The width of the walkway is 10 feet (3 mtrs) as measured between the two glass railings that are each 5 feet (2 mtrs) high. The glass floor is 2.8 inches (7 cm) thick and is made of five layers of glass. To prevent scratches on the top layer, visitors are required to wear shoe slippers. The structure can withstand an 8.0 earthquake and is supported on tuned mass dampers to reduce normal vibrations from the wind and people. The U-shaped structure is supported on 8 box column posts 32 inches square. The footings are supported on foundations 45 feet (14 mtrs) deep. Built at a cost of 8 million dollars, the entire project is the brainchild of Las Vegas businessman David Jin. The design team consisted of Las Vegas architect Mark Johnson of M.R.J. Architects and Lochsa Engineering. APCO Construction was the contractor and RWDI of Ontario did vibration and wind test studies.

The Skywalk is located on a side canyon that leads down to the Colorado River about 1.5 miles (2.4 kms) away. There is an elevation difference of 3,610 feet (1,100 mtrs) between the Skywalk and the river though the vertical height of the Skywalk is only 720 feet (219 mtrs) above the plateau directly below it.

The Skywalk can be reached by a 2 hour drive from Las Vegas or by plane into the Grand Canyon West airport. Tour packages that include entrance to the Skywalk start at $ 60 and include a short 1.5 mile (2.4 km) bus trip to the Skywalk as well as stops at Guano Point, the Indian Village and the Hualapai Ranch. Good meals can purchased at the Village and the Ranch. If you drive, there is an additional $ 20 to park. Additional package options include horseback rides, helicopter tours and boat trips along the Colorado river. Check out their official web site at http://www.grandcanyonskywalk.com/.

SO WHAT IS NORTH AMERICA’S HIGHEST PEDESTRIAN BRIDGE?

The answer is not a simple one as 8 structures can lay claim to the title in one form or another. Three of these bridge sites are near Grand Canyon National Park in Northern Arizona.

The current footbridge king could arguably be the new “bridge” located on the Western edge of the Grand Canyon that is appropriately dubbed the Skywalk. A U-shaped, glass enclosed walkway that cantilevers over the edge of a 720 foot (219 meter) high cliff on the Hualapai Indian Reservation, this “bridge to nowhere” is a spectacular bit of engineering even if it does not fit everyone’s definition a what a bridge is.

Although no longer around, the second highest was the huge “chicken wire” suspension bridge that soared 640 feet (195 meters) over the Colorado river for construction workers of the Glen Canyon Dam at Paige, Arizona. Despite its claim to fame as the all time highest North American suspension footbridge, it was no longer necessary after the completion of the dam and was removed in 1964. The main span of 1,280 feet (390 mtrs) is still the longest ever built for a conventional, two tower suspension footbridge.

The third bridge in the region to compete for the title is the historic 1923 Navajo arch bridge across the Colorado River near the Eastern edge of the Grand Canyon which was bypassed by a newer road bridge in 1995. While no one would argue its status as a bridge, the 467 foot (142 meter) arch was originally designed for automobiles and is not a true footbridge.

That allows Colorado’s little Box Canyon footbridge to come into the fray with its spectacular view of the historic town of Ouray. But here again, the past comes to haunt the present when you learn that the 220 foot (67 meter) high structure - which dead ends into a cliff - was originally built to carry a pipeline, not people.

The country of Mexico is not to be overlooked with their 248 foot (76 meter) high Puente Cascada de Texolo suspension bridge over the river Xico near the town of the same name in Veracruz State. Originally built at the turn of the century as a simple king post, damage to the original truss necessitated the building of the current suspension bridge designed by The American Bridge Company in 1908. While the Xico bridge is popular with tourists, a large pipe underneath the deck leaves question as to whether it was ever intended for public use.

The amazing Mapimi suspension bridge near Torreon in the state of Durango ranks second among North America's current suspension footbridge spans with a deck 212 feet (65 meters) high. Although it looks and feels like a footbridge with a precariously narrow walkway, purists might argue its original use for a mining car rail line puts it in the category of a converted railway bridge.

This leaves room for our Canadian entry that is currently one of the two highest footbridges in North America built specifically for people only. Located more than 180 miles (290 kilometers) east of Quebec City, the 200 foot (61 meter) high Canyon des Portes de l’Enfer bridge crosses the Rimouski river south of the town of the same name. Like Vancouver’s famous Capilano bridge, the structure is a catenary suspension bridge where the walkway follows the natural curve of the suspension cables. For the Rimouski span, the designers broke with tradition and put the cables below the deck while adding a stiffening truss above the deck in place of the more conventional suspender cables.

Our 8th and final entry is the latest kid on the block, a 360 foot (110 mtr) long span suspension bridge that opened in 2008 as a part of the Kapalua Mountain Outpost in Maui, Hawaii. With a deck to ground height of 200 feet (61 mtr), it is America’s highest suspension footbridge but leaves no clear or absolute front runner among "official" North American footbridges.

Of course the highest pedestrian/footbridge debate gets even more complicated if you include the many walkways that connect skyscrapers, hotels, stadiums and hospitals. I have not listed these enclosed “corridors” or “hallways” as these structures do not connect to the ground. Two of the highest and most notable examples are the maintenance walkway that connects the 111 and 115 Broadway buildings near Wall Street in New York City and the 14th floor skywalk that connects the north and south towers of Chicago’s famous Wrigley building. In Portland, Oregon there is an unusual 150 foot (46 meter) high cable stay supported bridge / corridor that connects the VA Medical Center with the Oregon Health Sciences University.

The world’s highest building to building connection is the skywalk or skybridge between the twin skyscrapers of the Petronas Towers in Kuala Lumpur, Malaysia. Opened in 1998, the 190 foot (58 meter) long corridor is 560 feet (170 meters) above the ground. 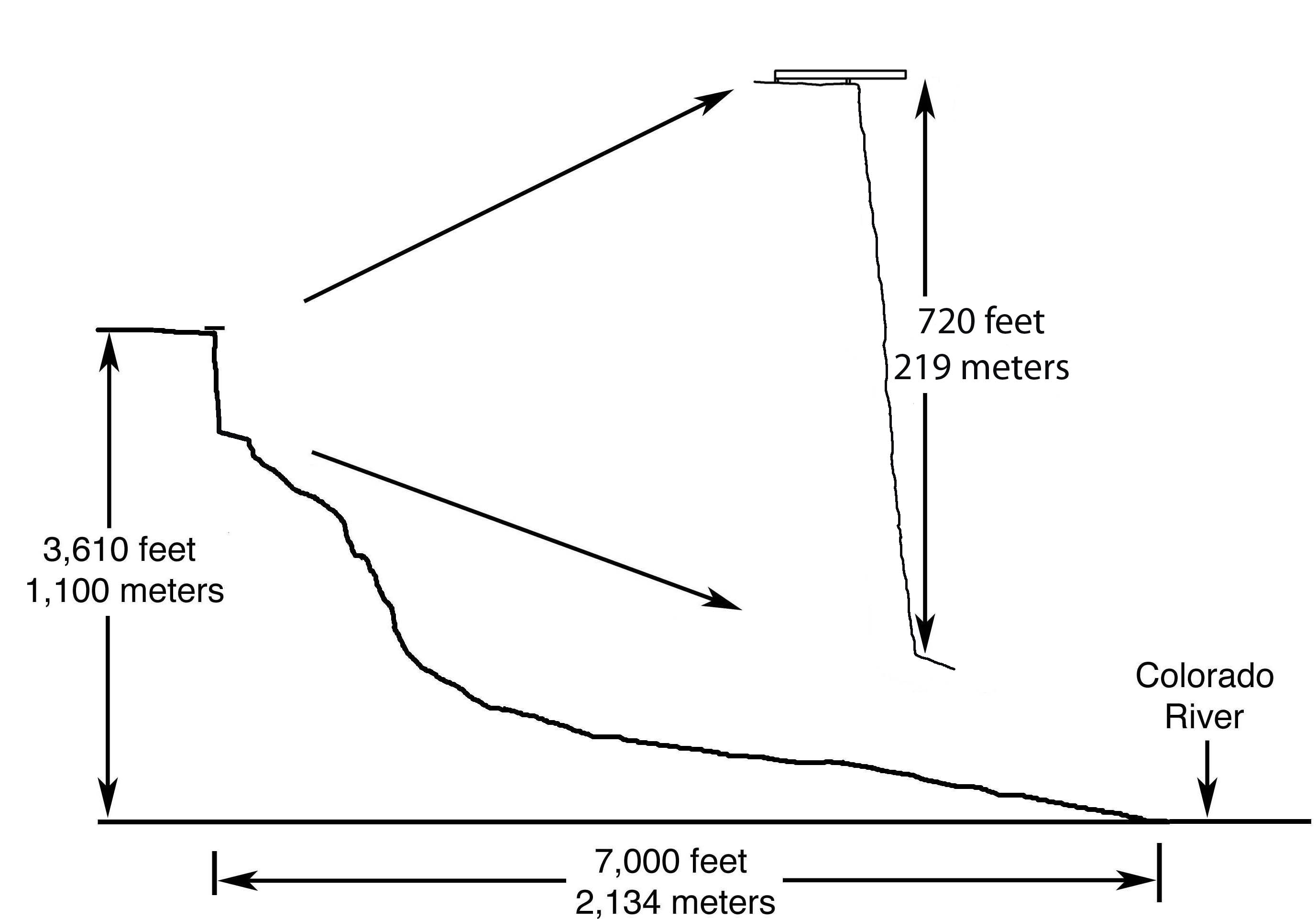 Skywalk elevation within the Grand Canyon 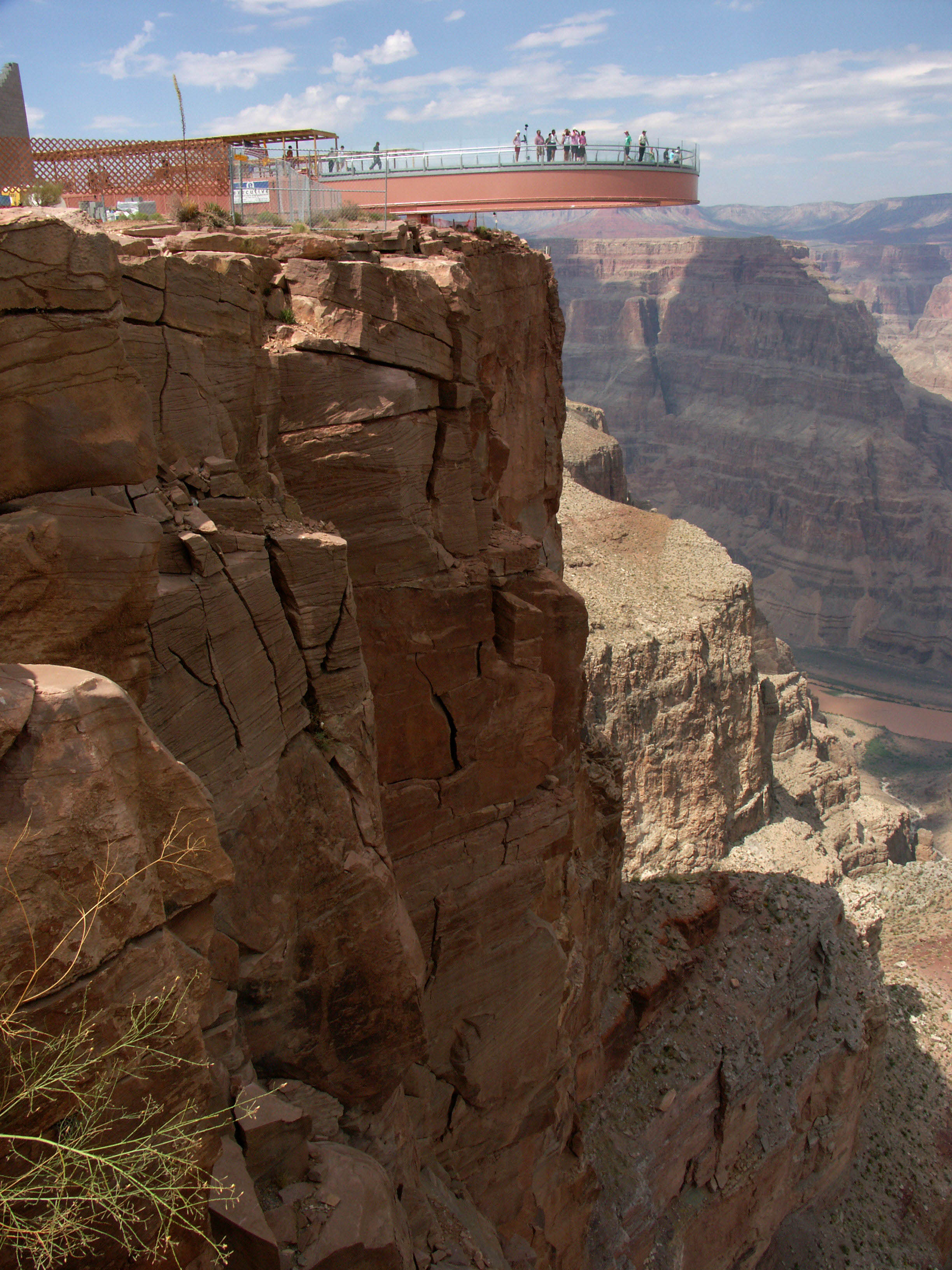 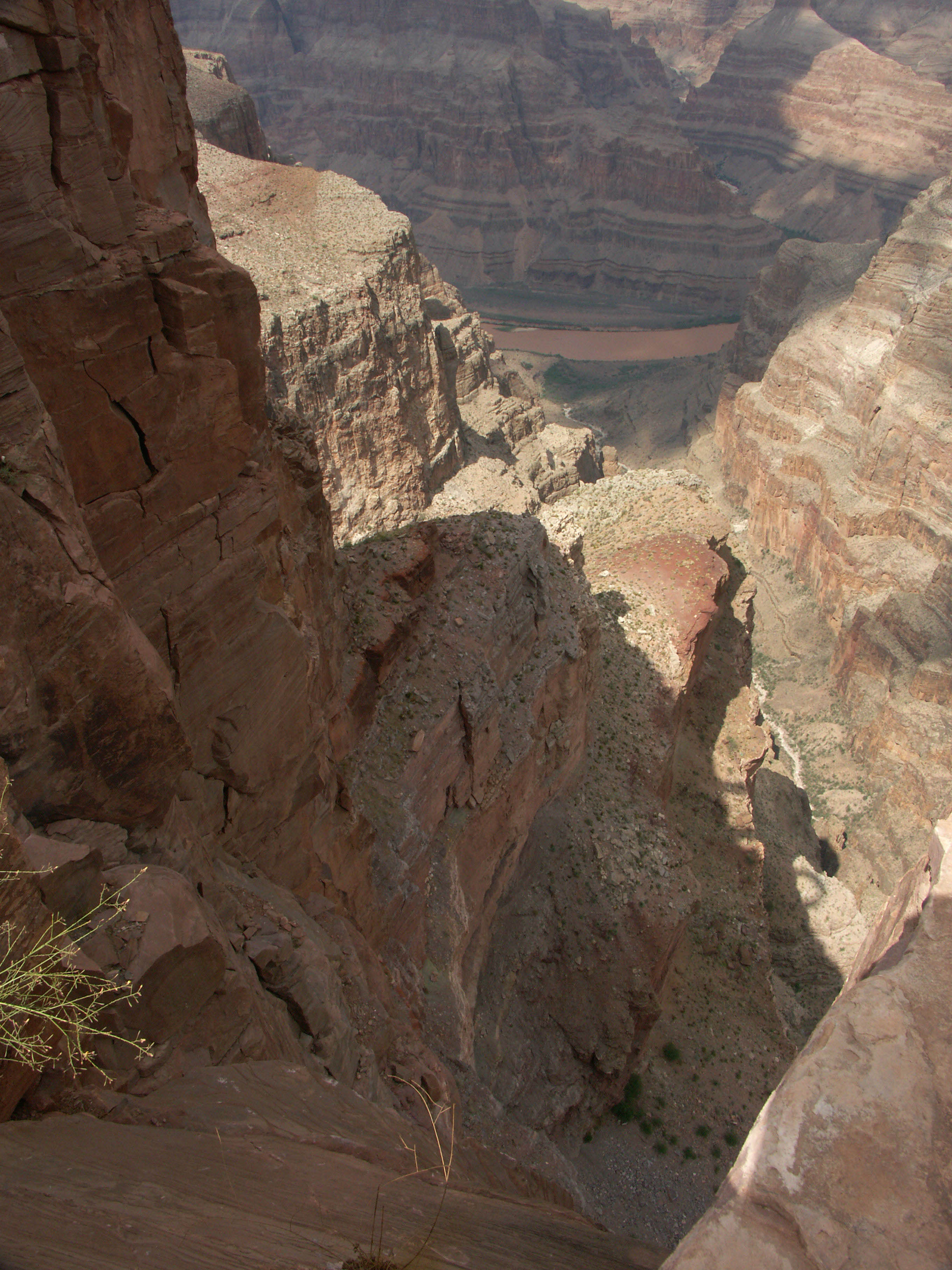 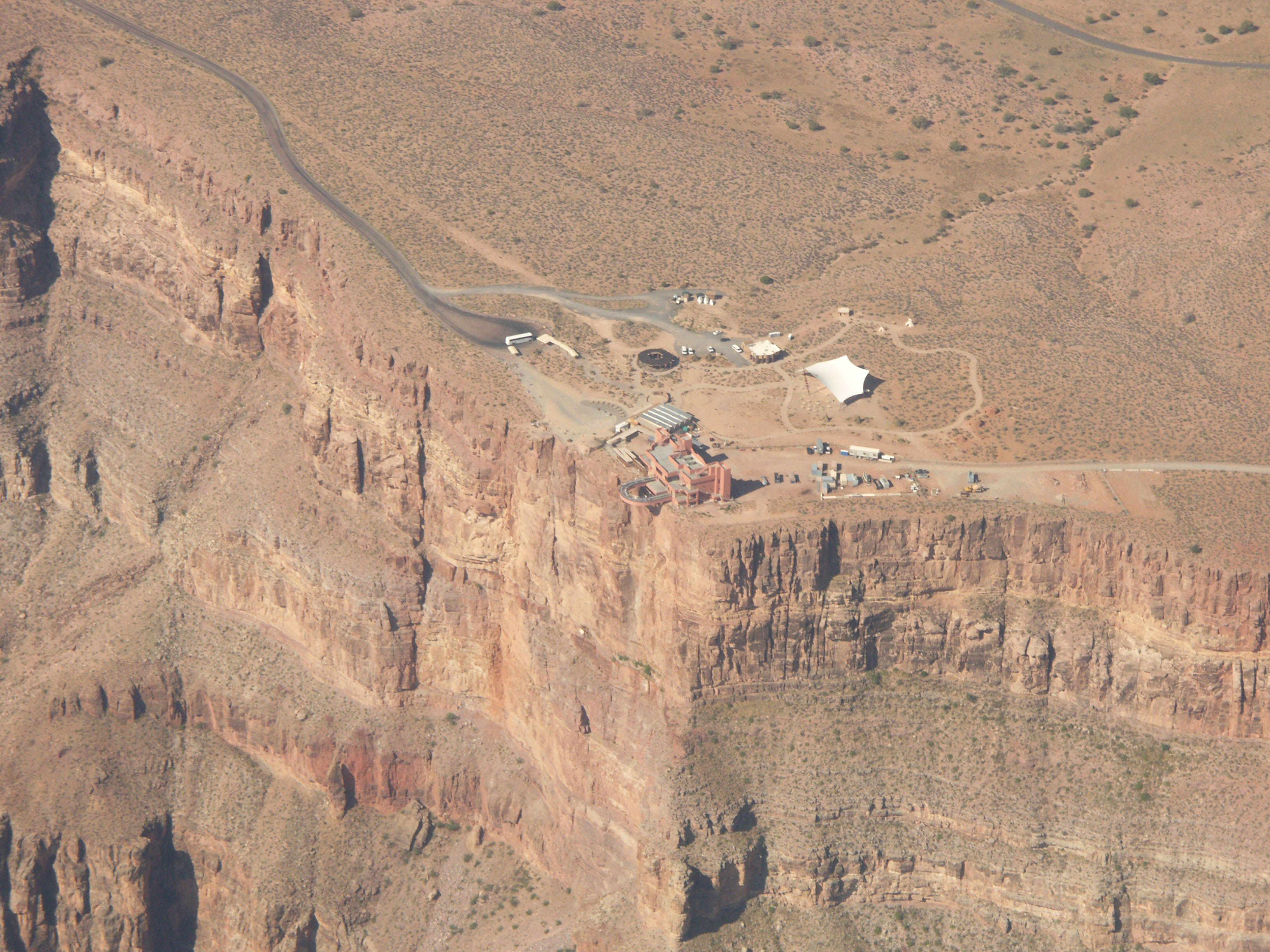 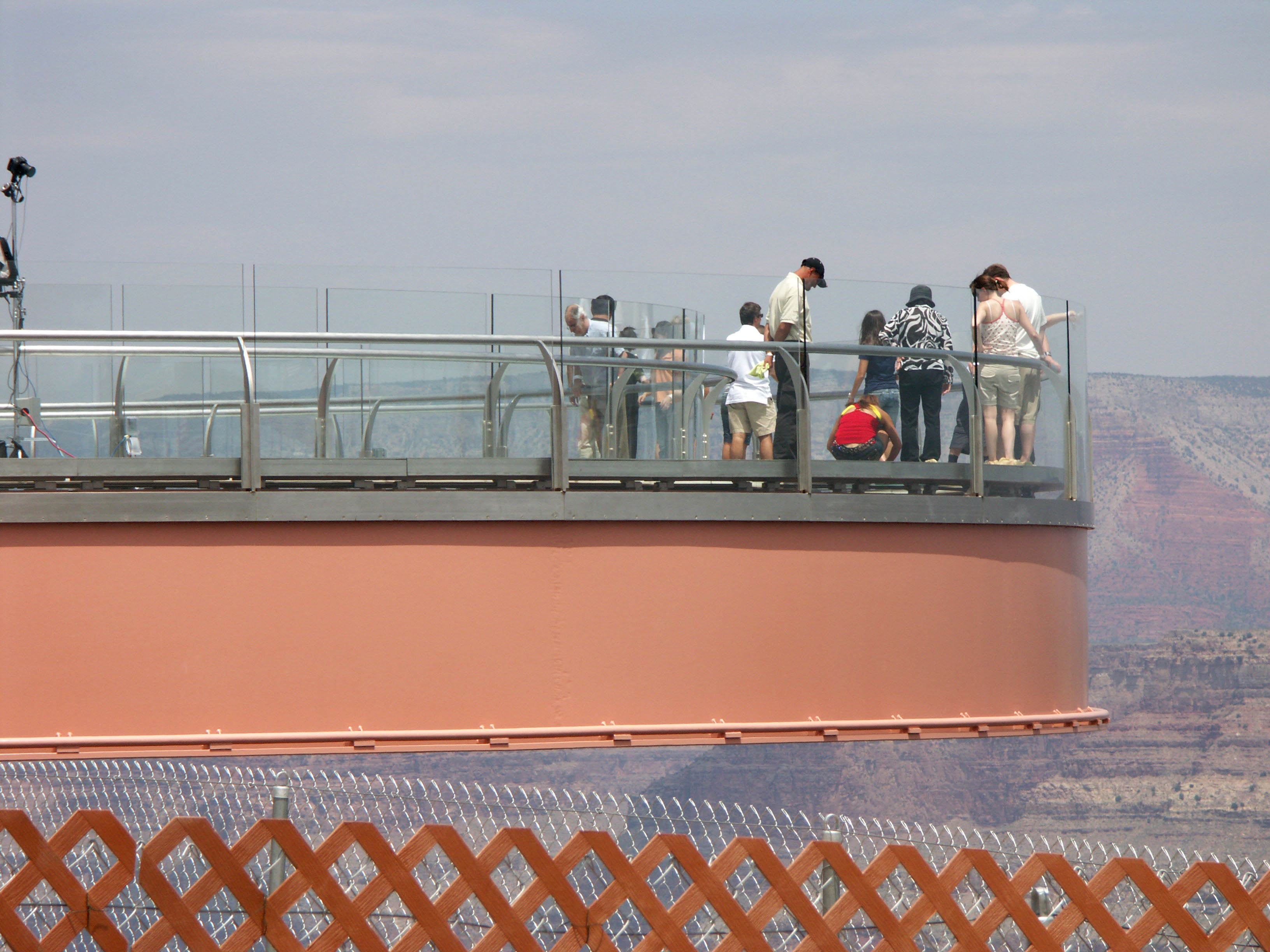 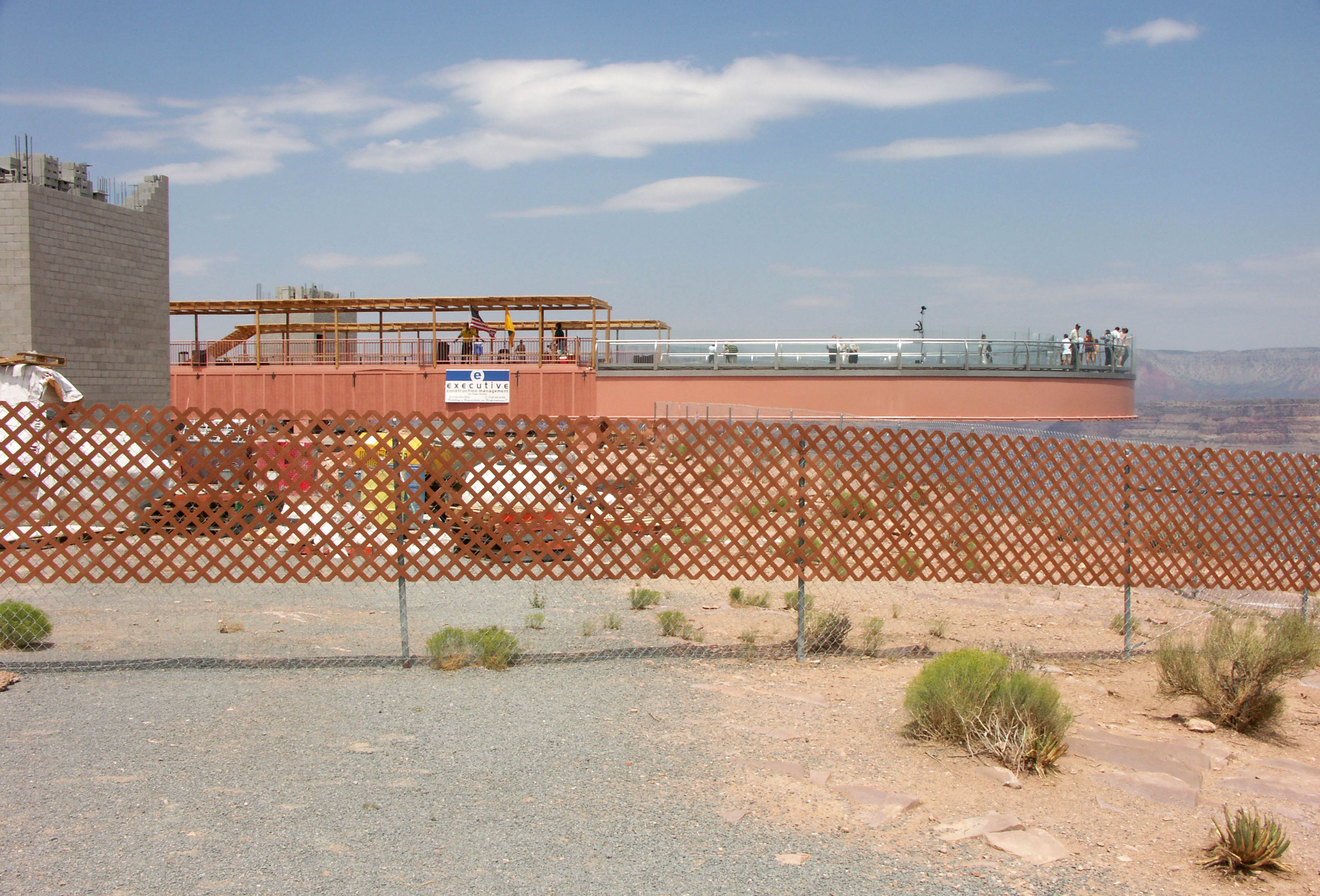 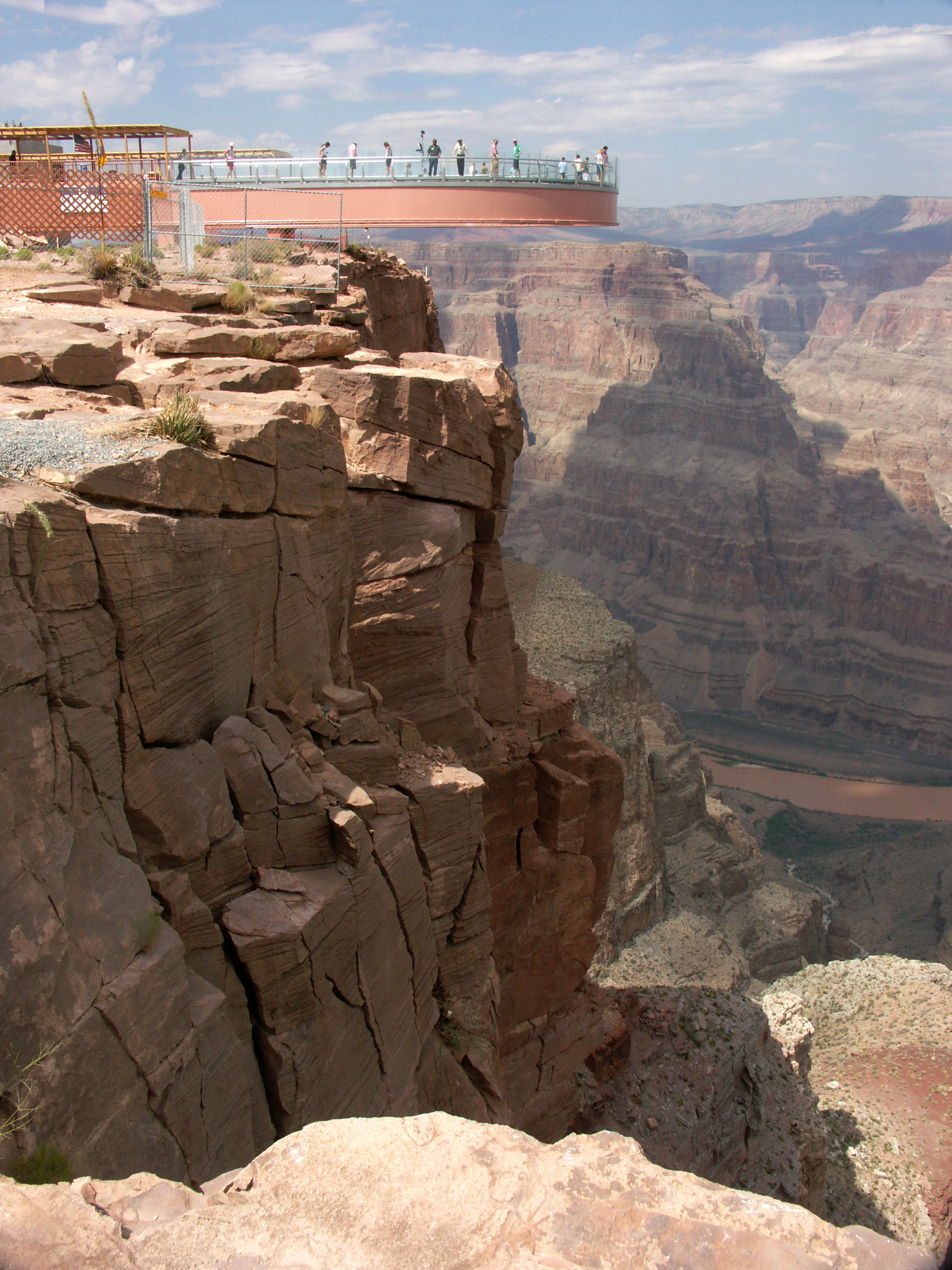 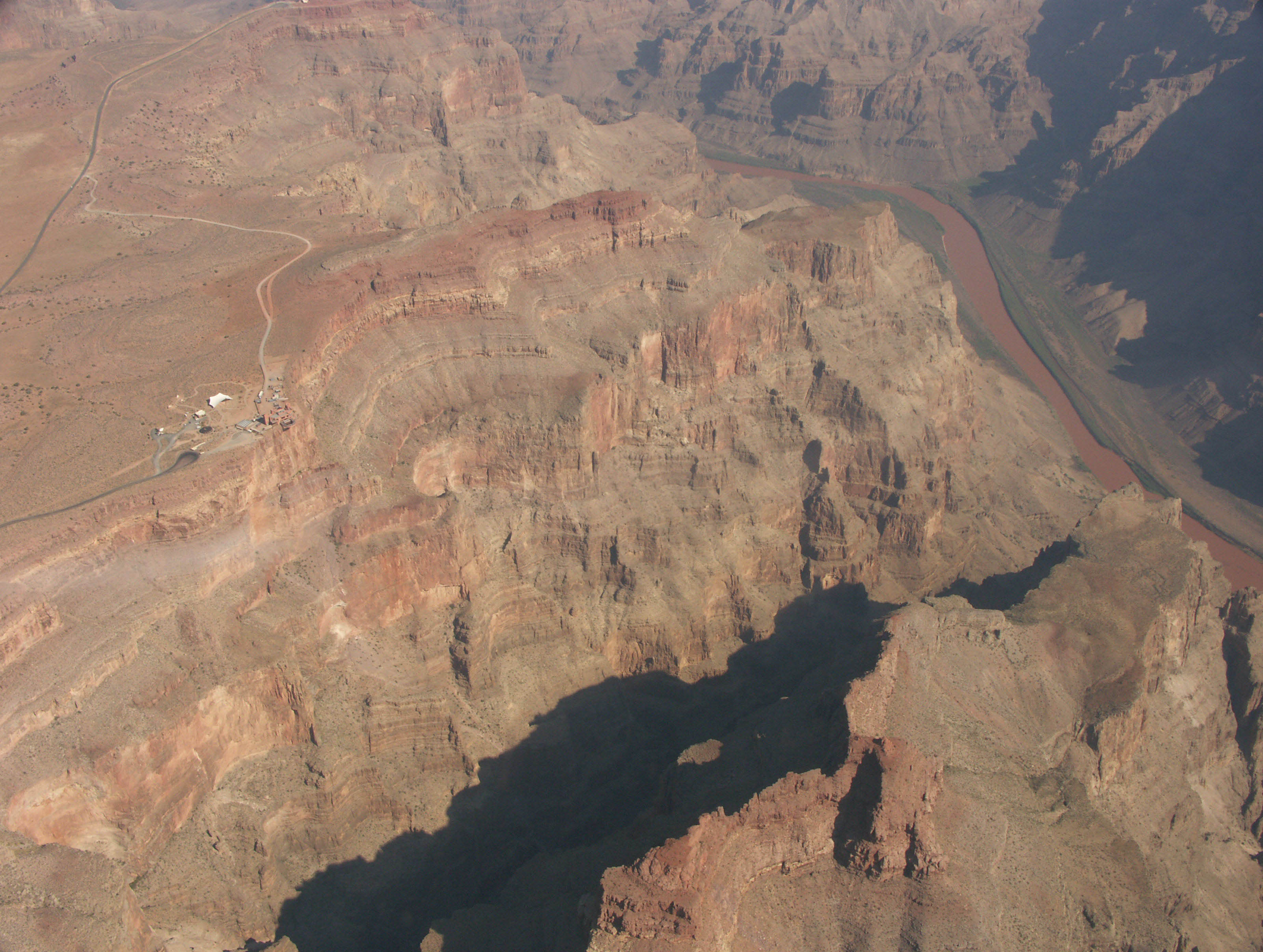 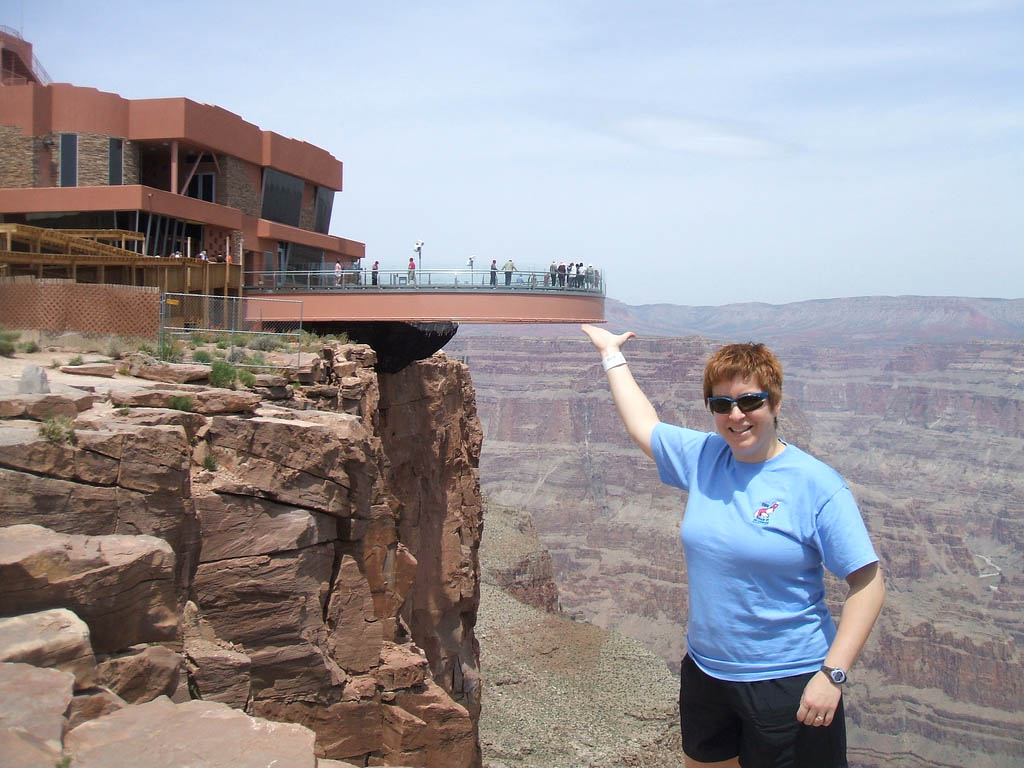 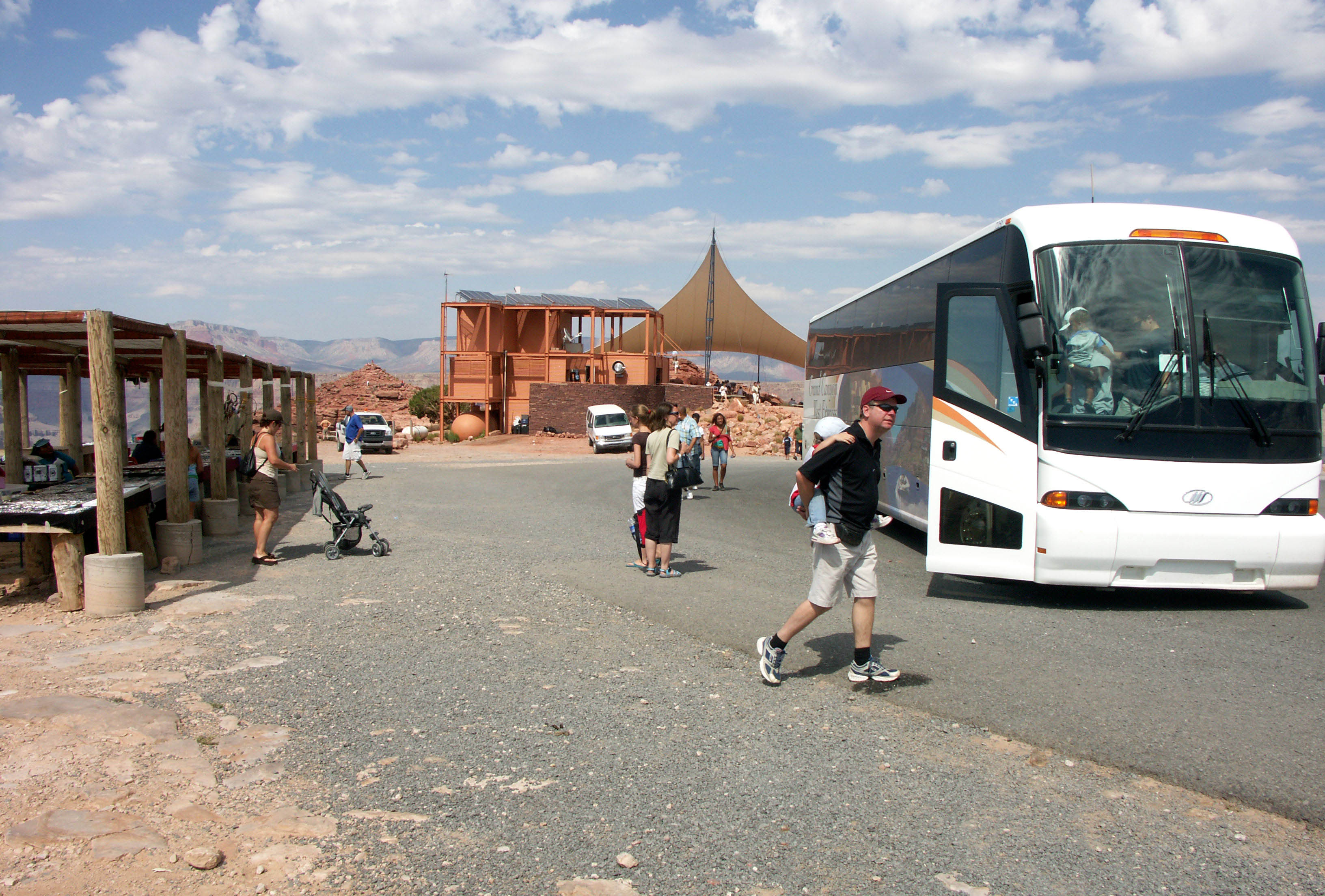 Shuttle buses travel between several spots including Guano Point where you can buy a meal and take in the amazing view. Image by Eric Sakowski / HighestBridges.com 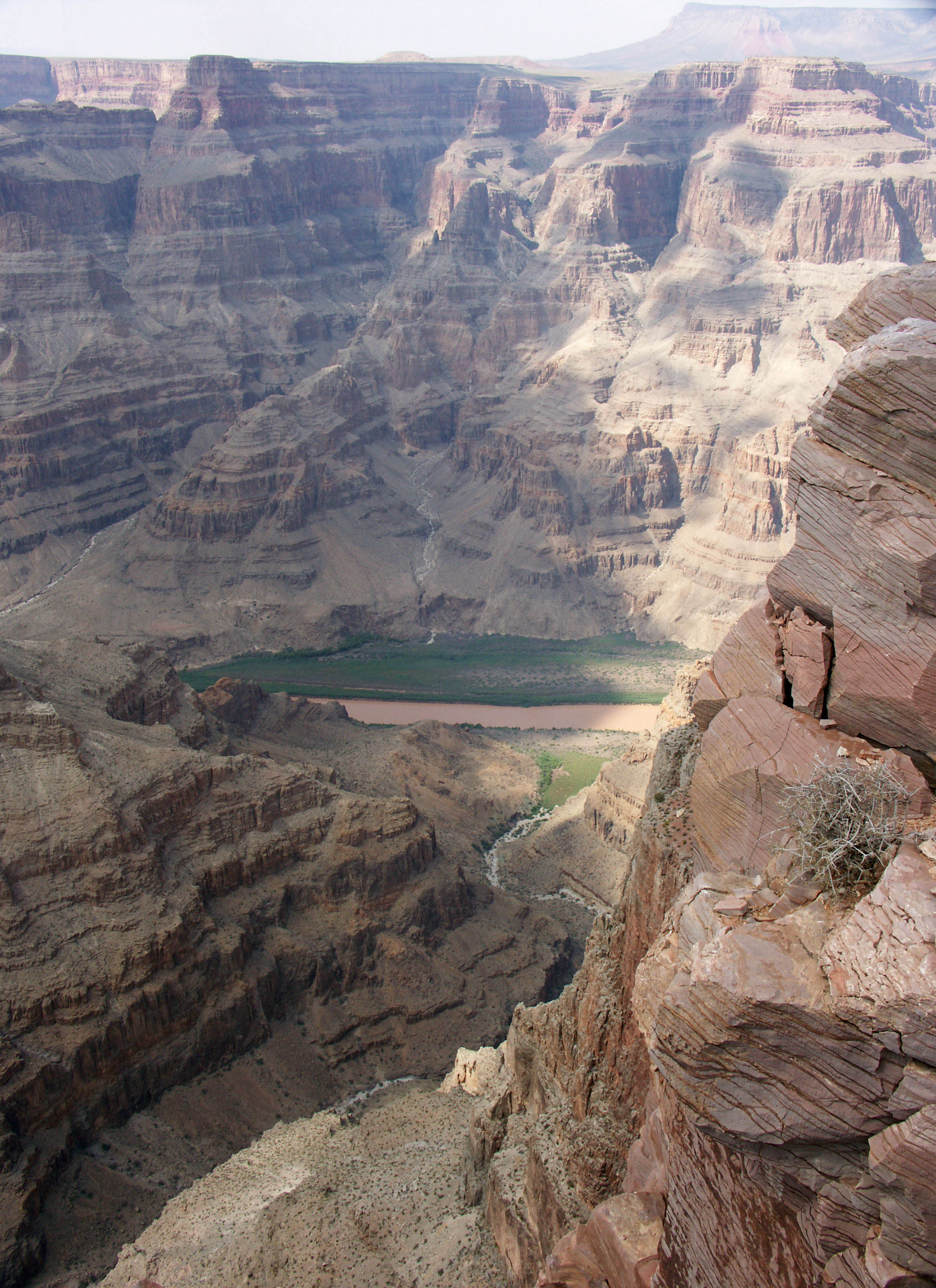 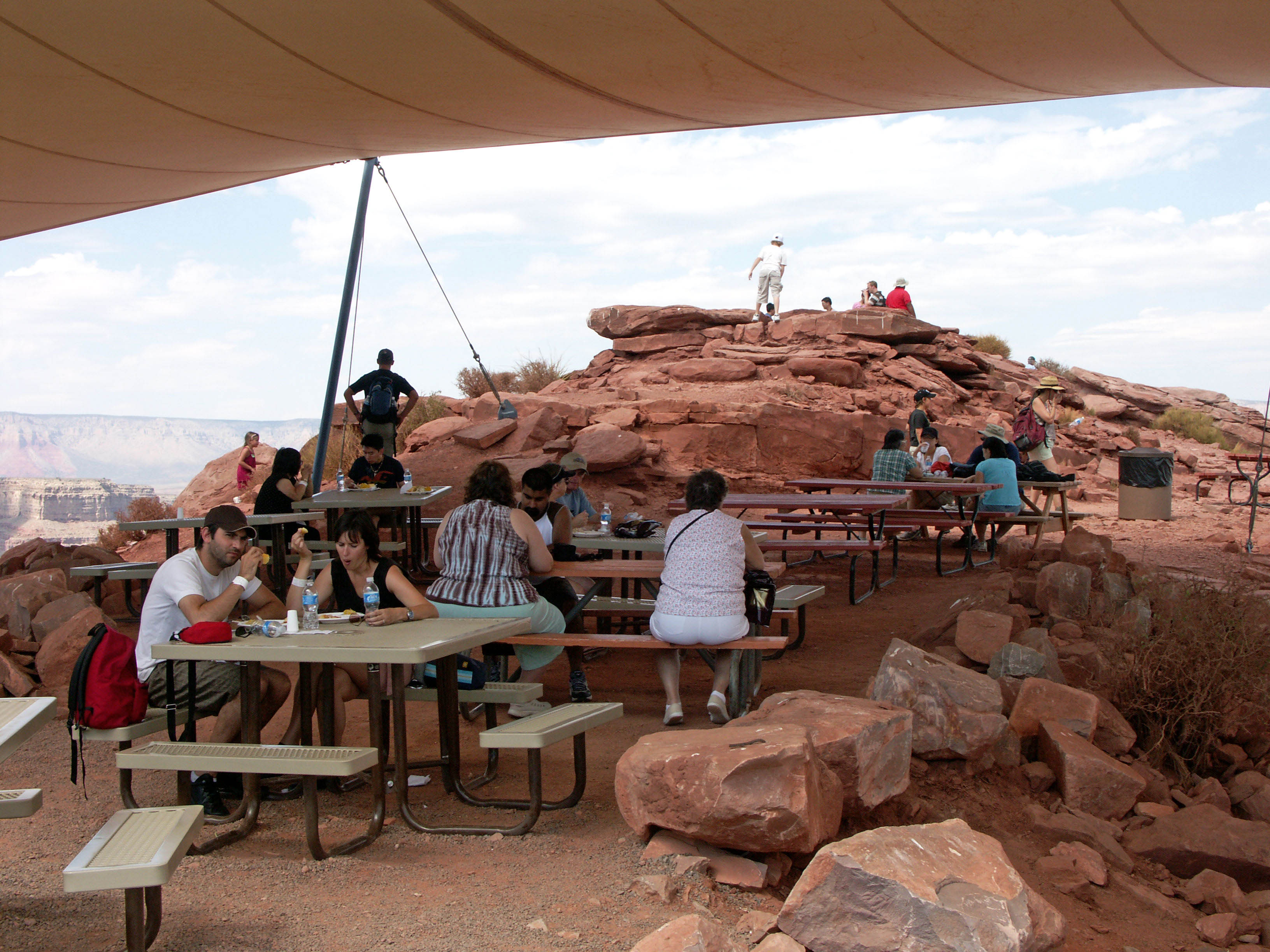 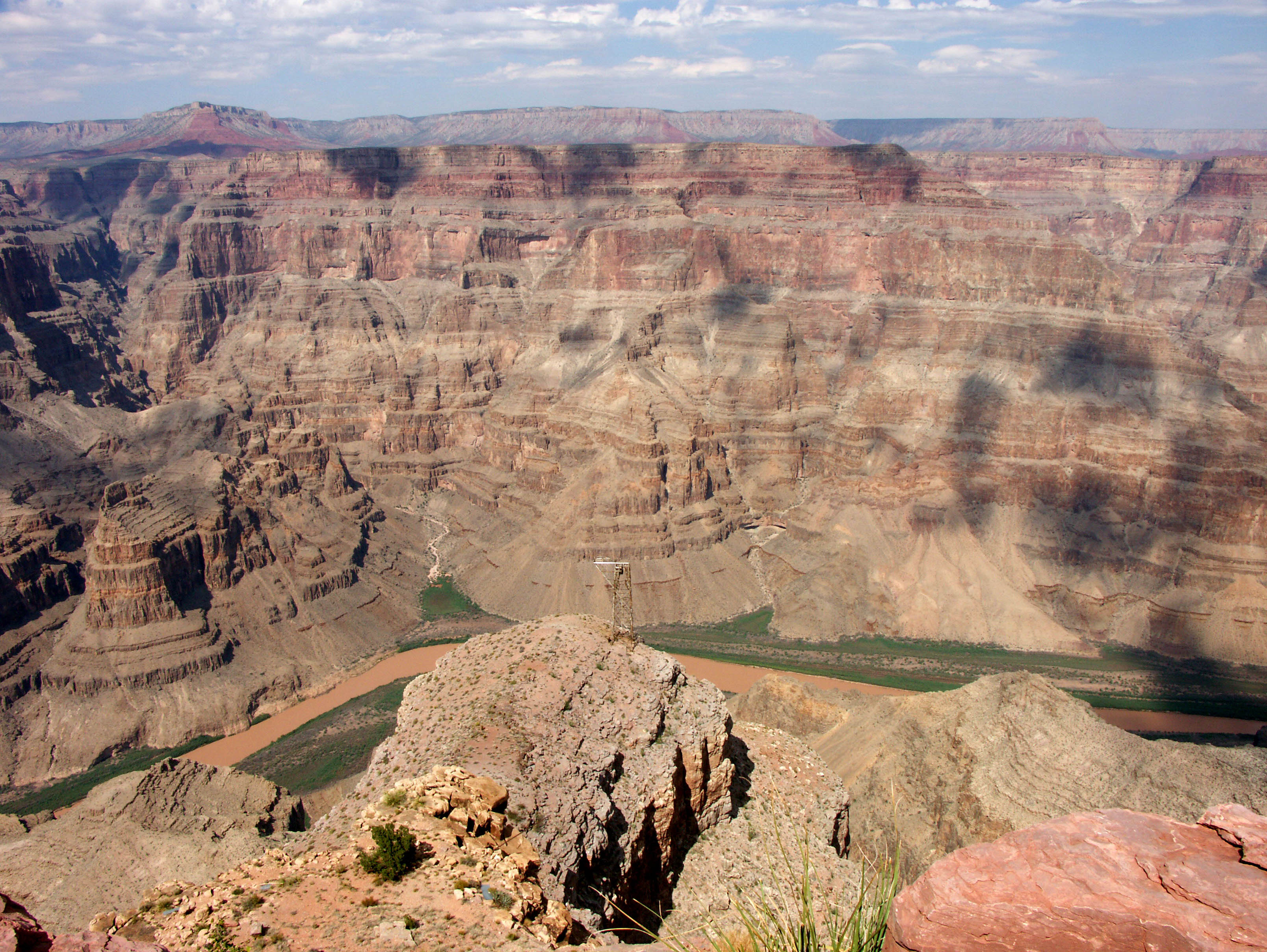 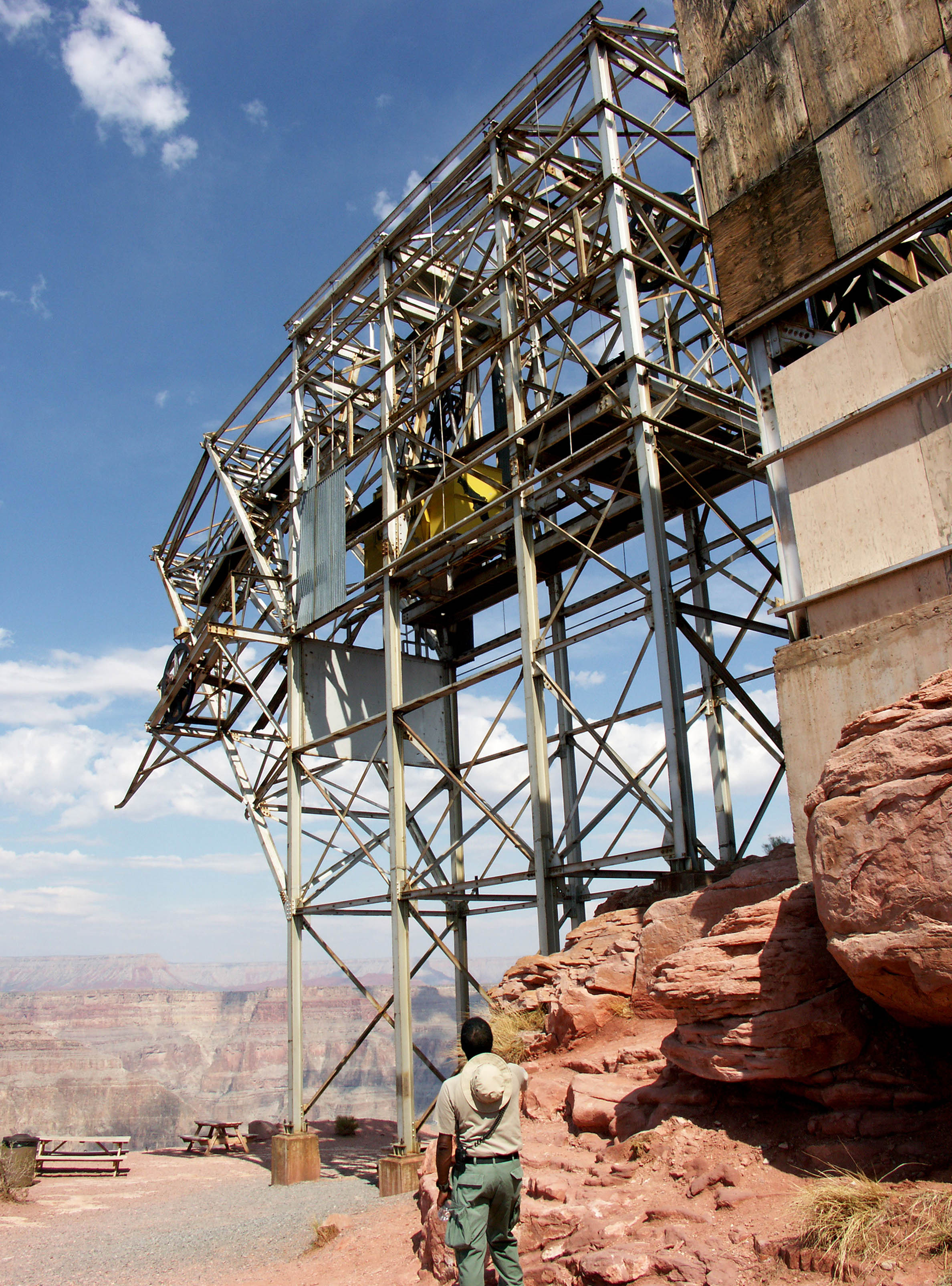 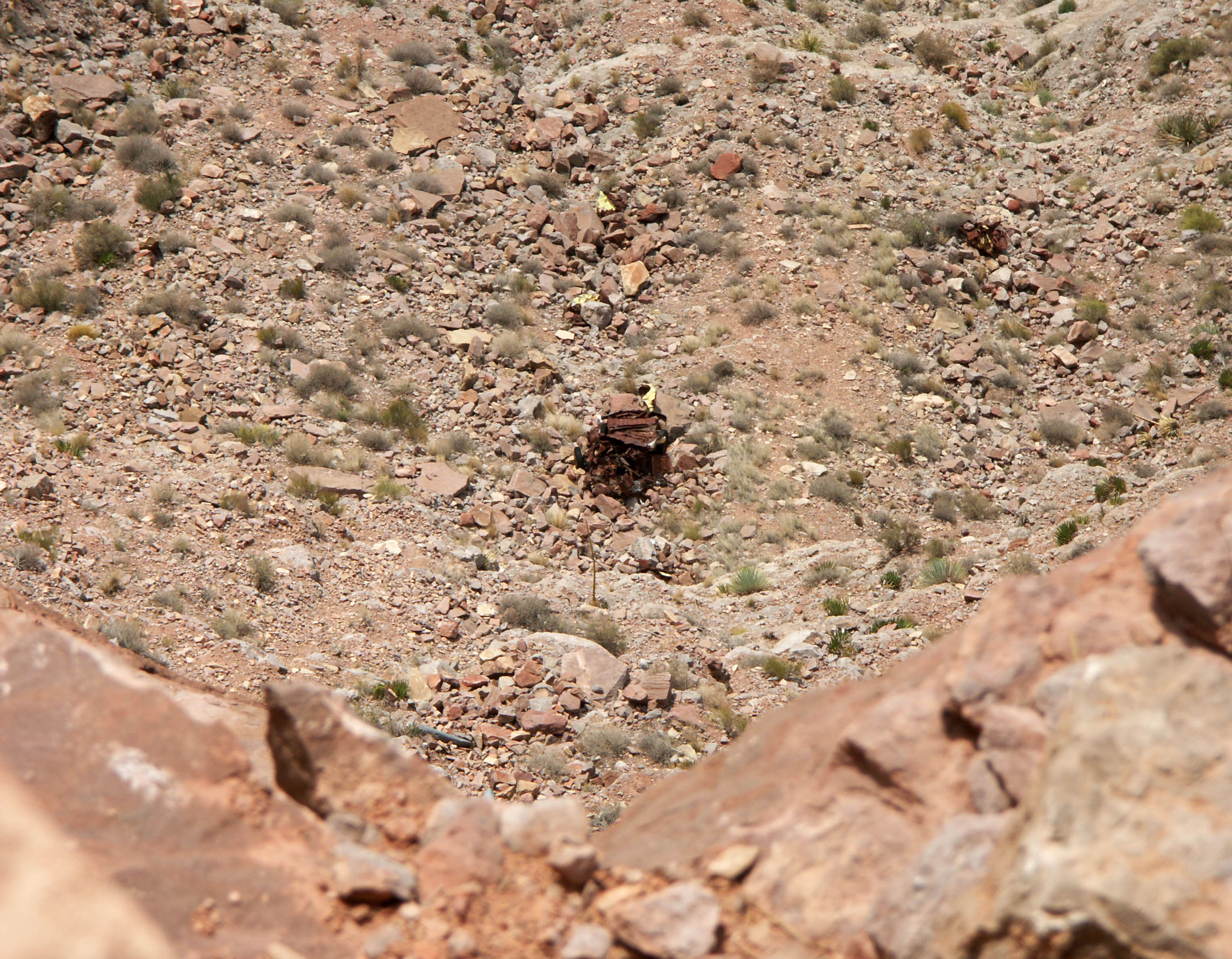 The remains of the car driven off a cliff for the 1991 film "Thelma and Louise". Image by Eric Sakowski / HighestBridges.com 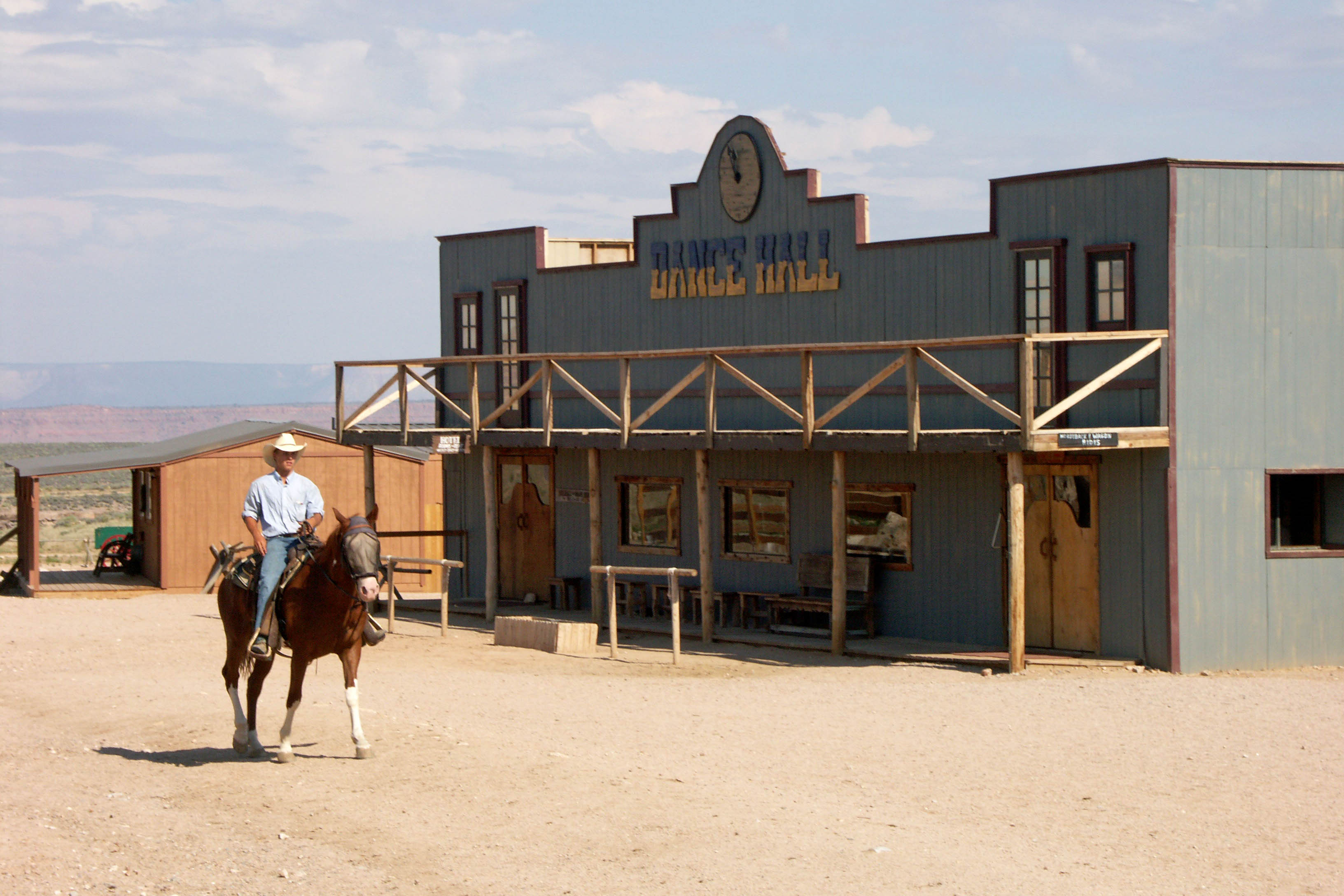 The shuttle bus also stops at Hualapai Ranch where you can see cowboy shows or get lunch at the Dance Hall. Image by Eric Sakowski / HighestBridges.com 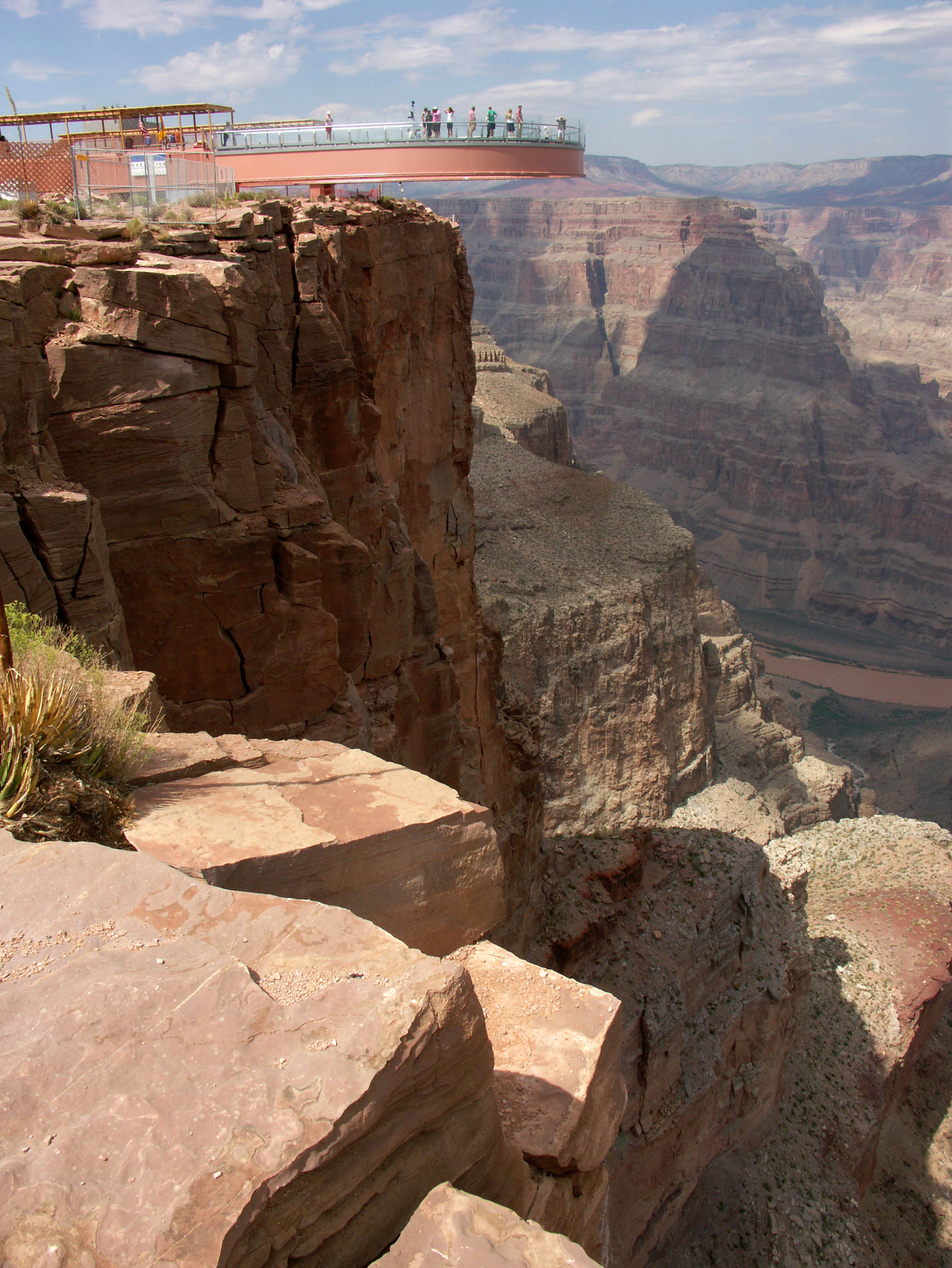 Eagle Point and the Skywalk in 2007 before the Cafe and gift shop building were constructed. Image by Eric Sakowski / HighestBridges.com 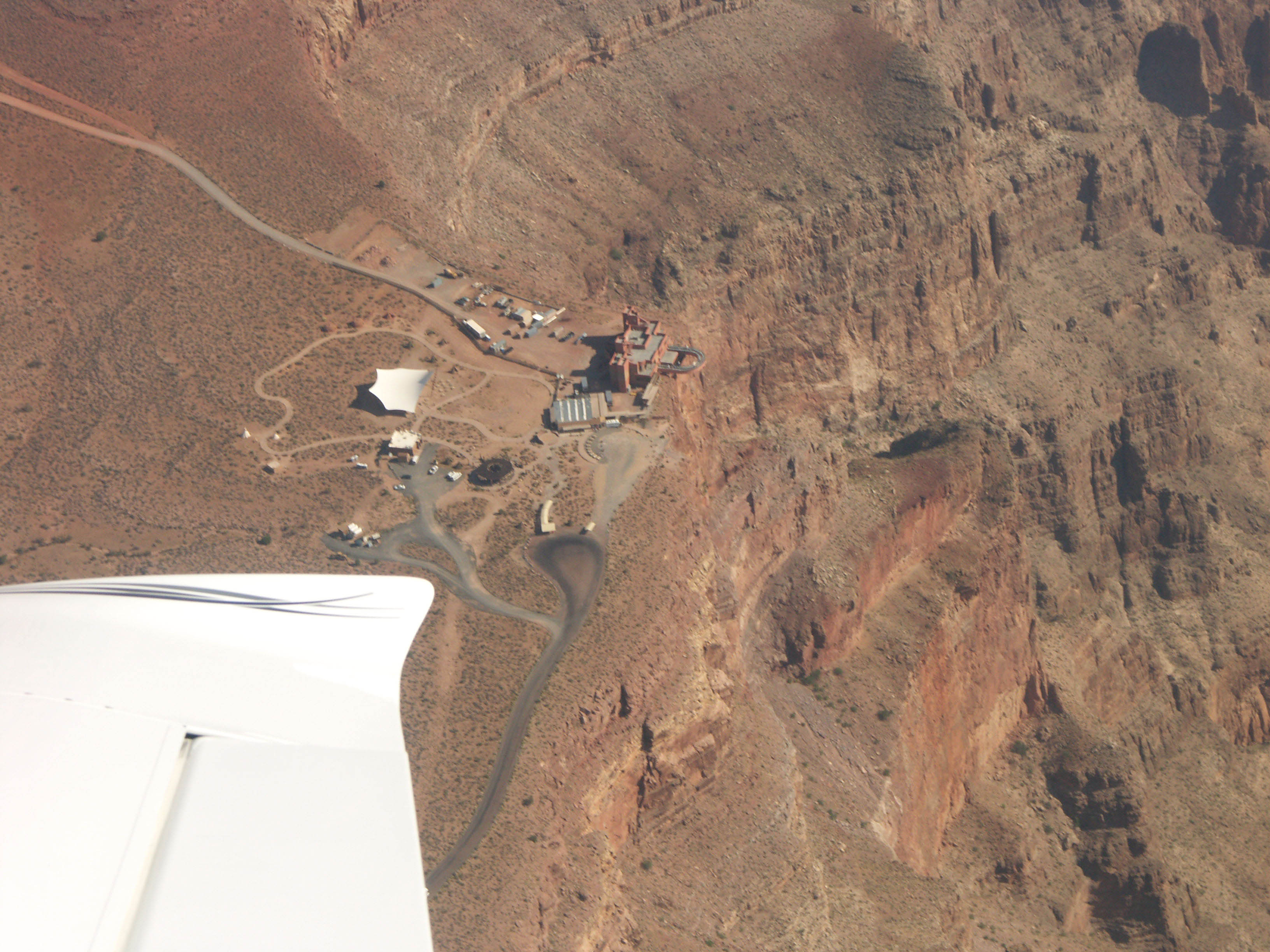 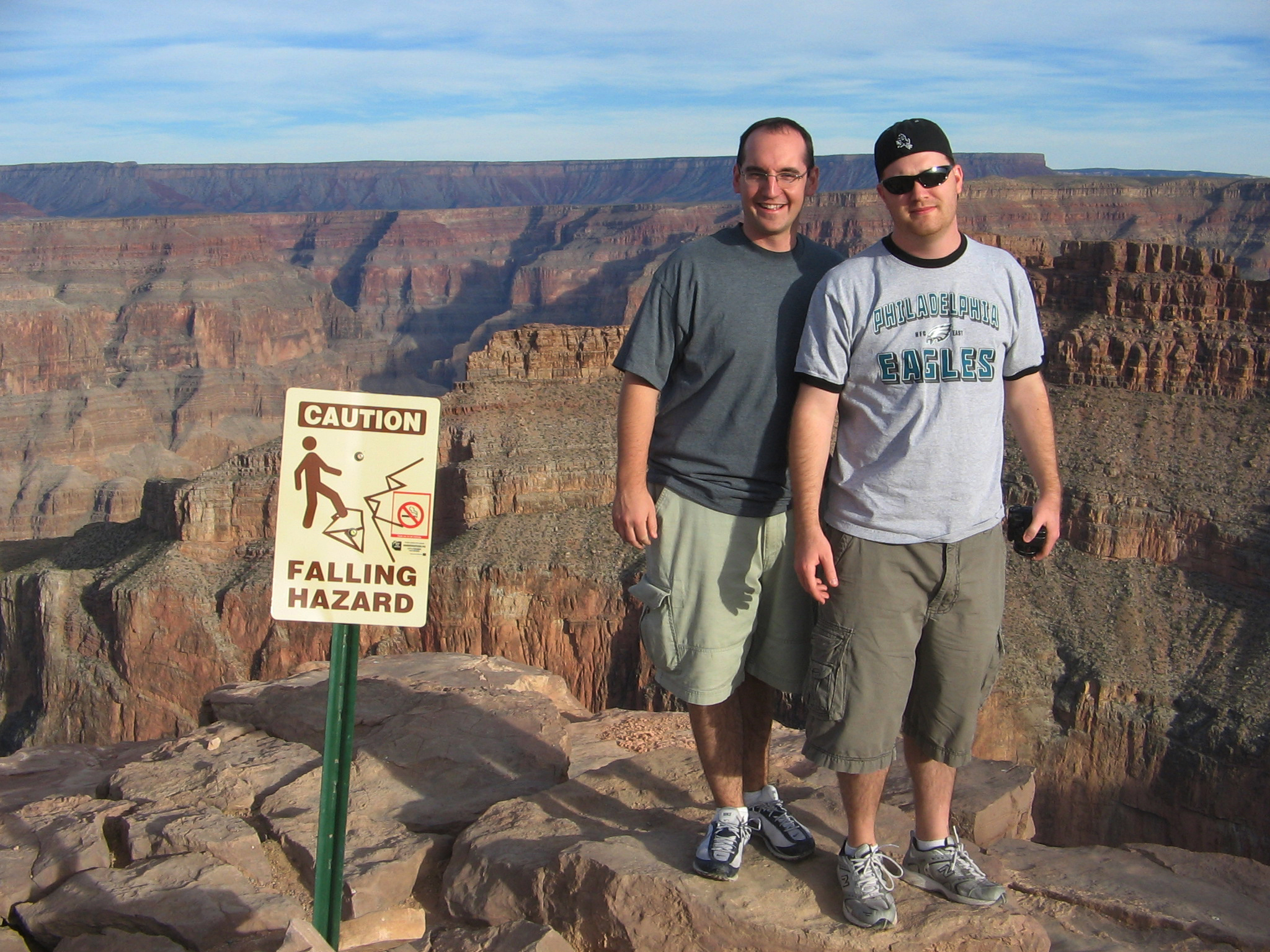 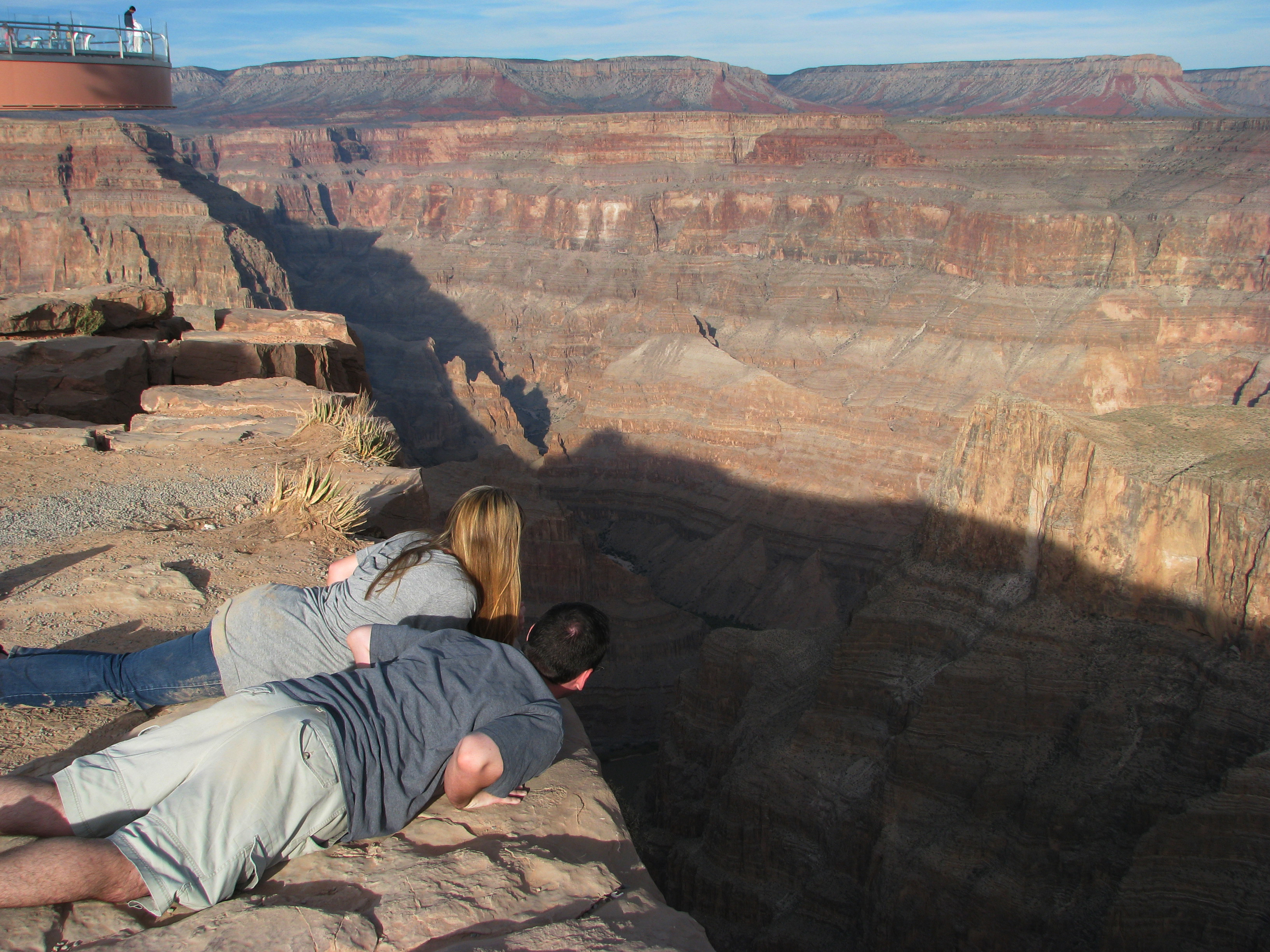 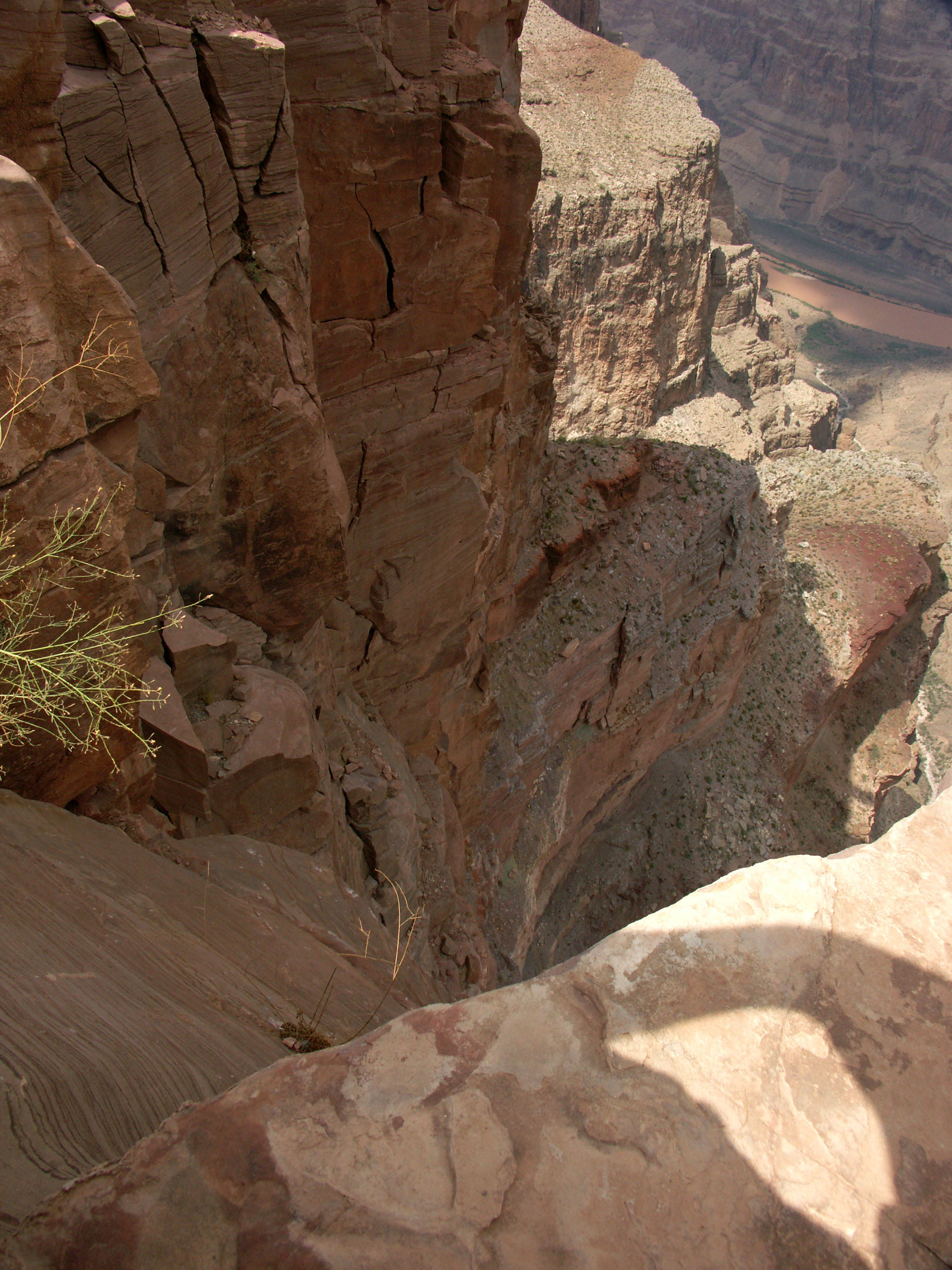 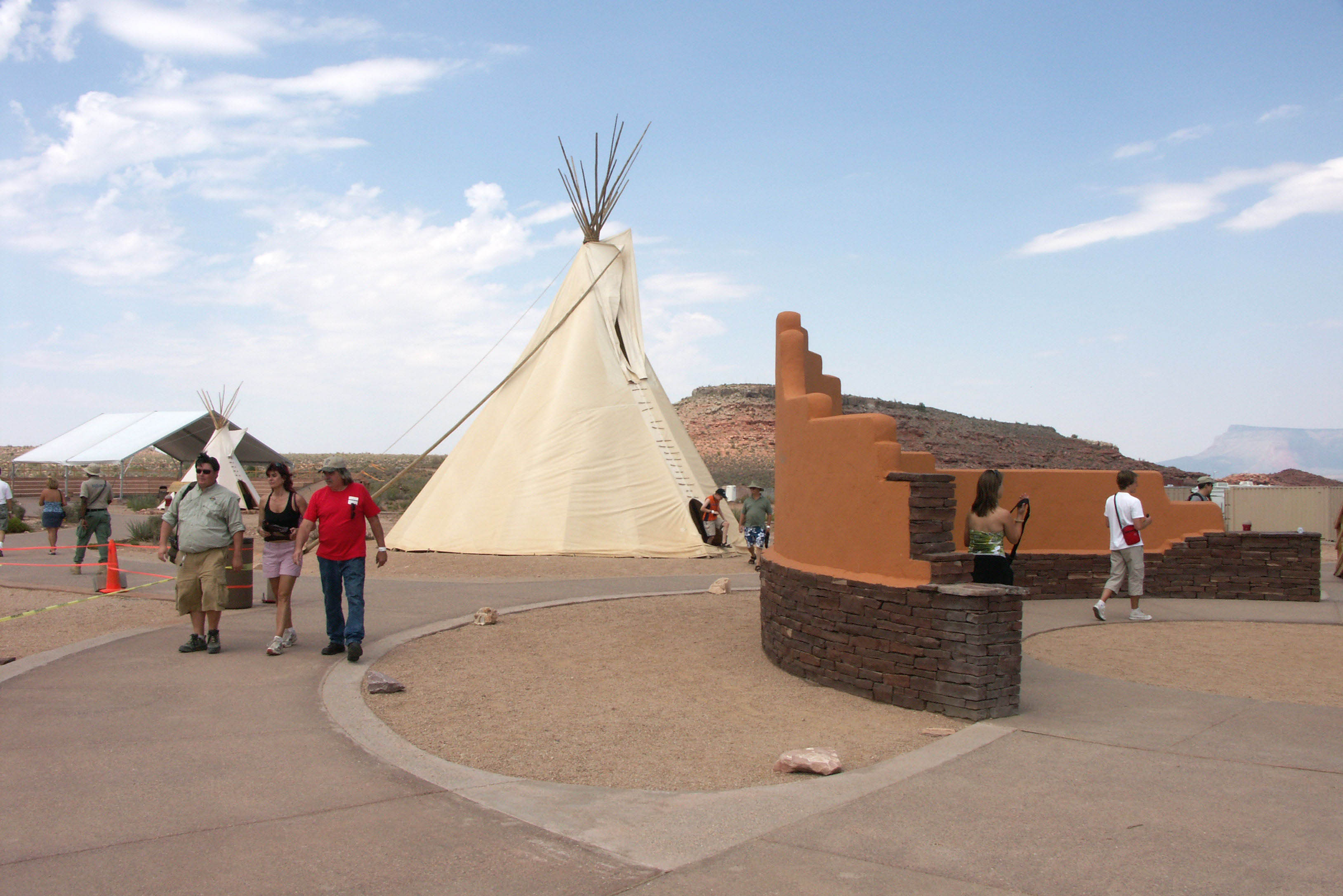 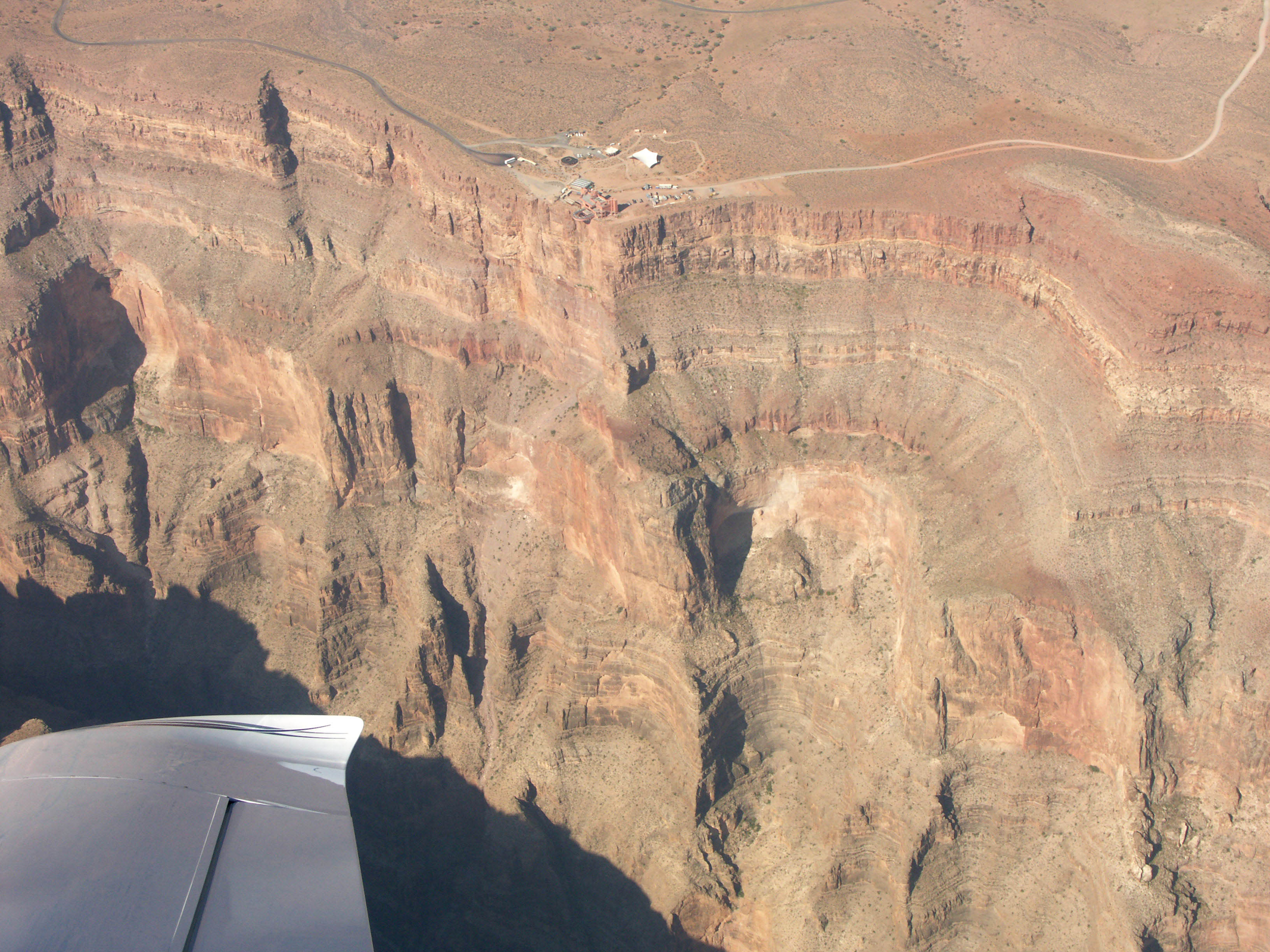