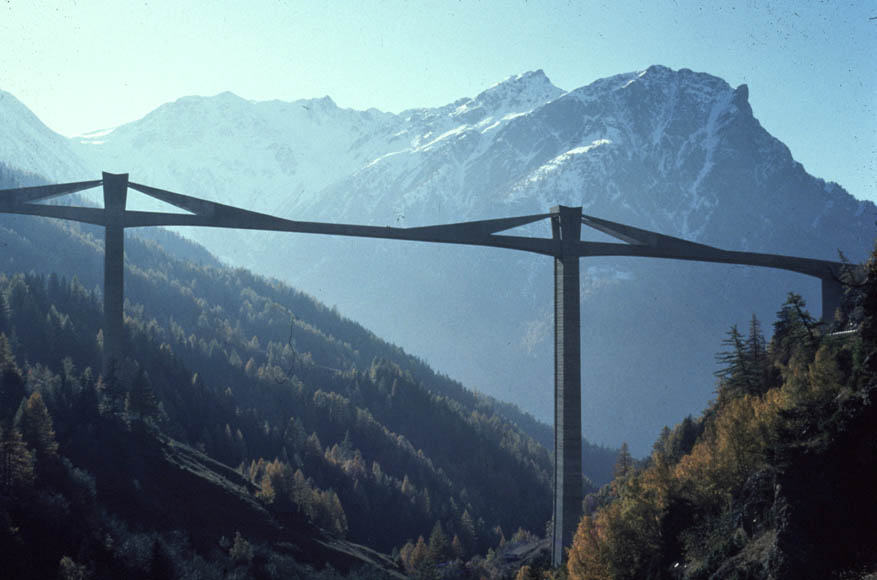 Switzerland is a country that has always been on the leading edge of concrete bridge development. Probably no modern Swiss bridge better exemplified this than Christian Menn’s Ganterbrücke, the first large scale extradosed bridge in Europe to have its stays enclosed in a prestressed concrete “sail”. Like the newer extradosed bridge designs, Ganter is a cross between a cable stayed bridge and a beam bridge. The natural beauty of the bridge comes from the geometric shape of these triangular supports which also resulted in a thin bridge deck that is more elegant than its bulky prestressed concrete counterparts. Located near the Simplon Pass in the spectacular Klosters region of the Swiss Alps, the Ganter bridge could not have been built in a nicer setting.

The reason such a unique bridge got built in the first place is due to the Swiss bridge design process which encourages design competitions. According to Princeton University Civil Engineering Professor David P. Billington, the Swiss Society of Engineers and Architects created a design competition whereby 7 jury members followed established rules before choosing a winner who was paid a portion of allocated prize money. Runner ups were paid a smaller percentage of money based on their ranking.

When the winner was announced for Ganter bridge, the seven design entries were put on display at a museum in Bern. The jury had considered many details including overall concept, performance, aesthetics, cost and the method of construction, among others. The report released by the jury praised Menn’s design as “...well balanced and convincing. The scale of the design fits well into the landscape. The conical hollow box is elegantly formed throughout the entire length of the bridge and gives an impressive profile with its wide cantilever roadway slab”. Encasing the cable stays became necessary since their connection to the deck went part way into the curving approach plan. The concrete enclosures also protect the cables from the elements. For some, the concrete walls, including one across the top of the towers, might have made the sails feel too much like a tunnel entrance.

Whatever its pros and cons, the groundbreaking Ganterbrücke will always remain one of Europe’s most historical bridges. Or as Mr. Billington said, “Ganter bridge ... represents one of those rare events where a new form arises”.

Designer Menn continued to push the boundaries of conventional bridge design in 1998 with the Sunniberg bridge, a triple-span extradosed bridge with pylons that flair out at the top. The lower towers make the cables less oppressive and more like a series of “harps” waiting to give a chorus of music to whomever travels through them.

Between 2006 and 2008 the Ganterbrücke was given a complete rehab including measures to prevent further movement of the piers on the south side of the bridge which had shifted 105 mm southward. 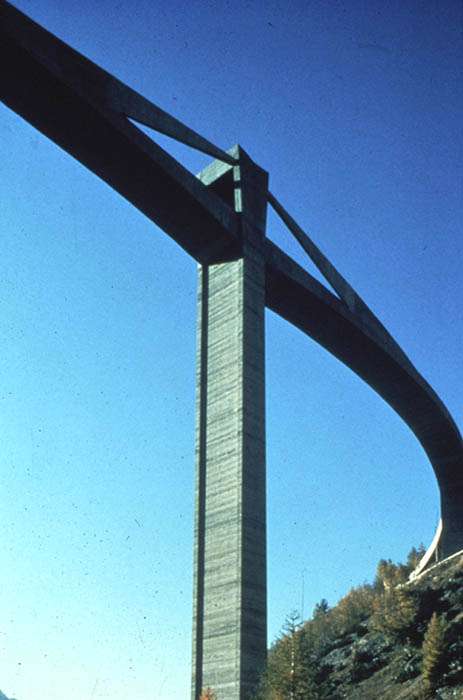 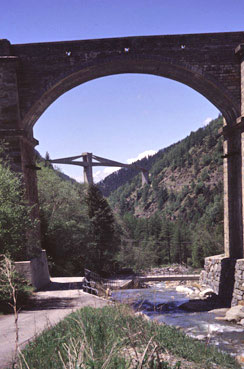 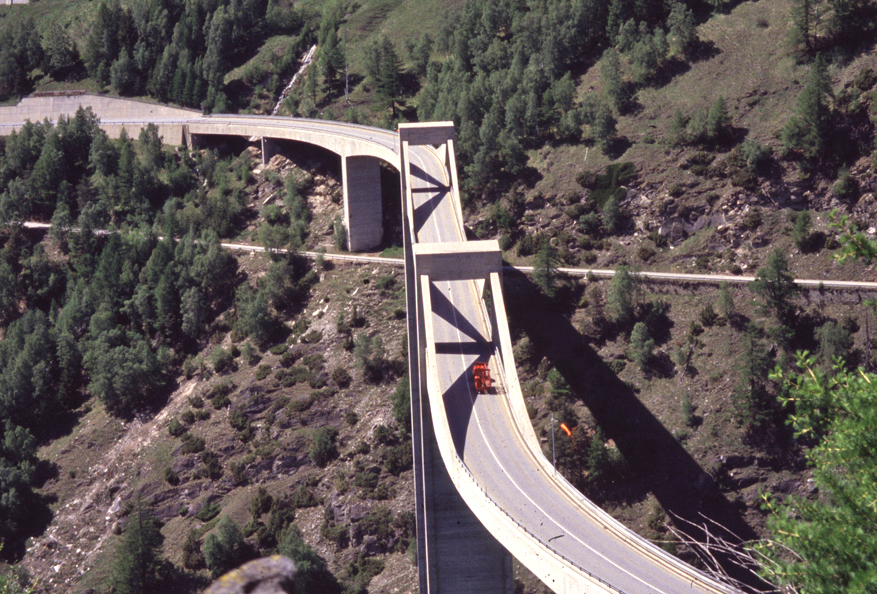 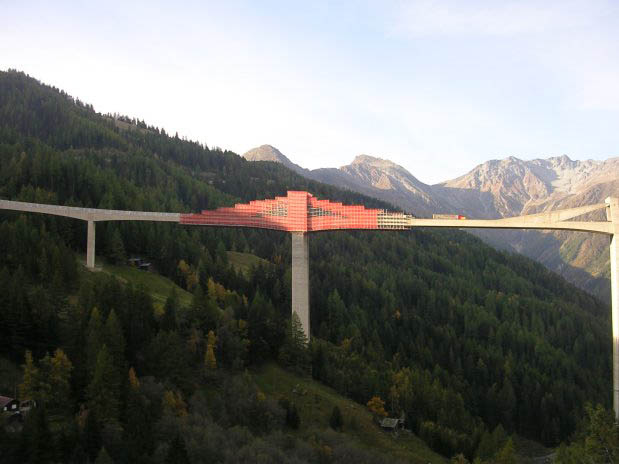 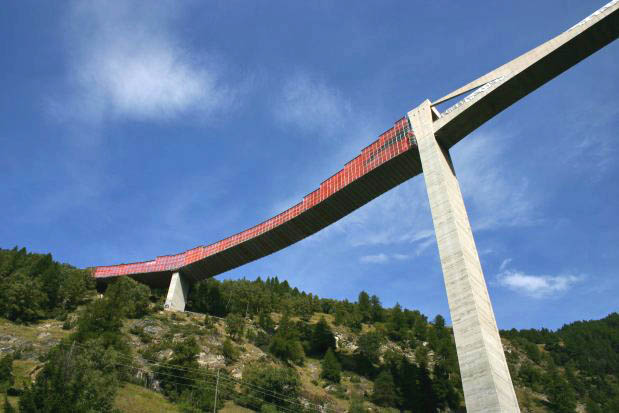 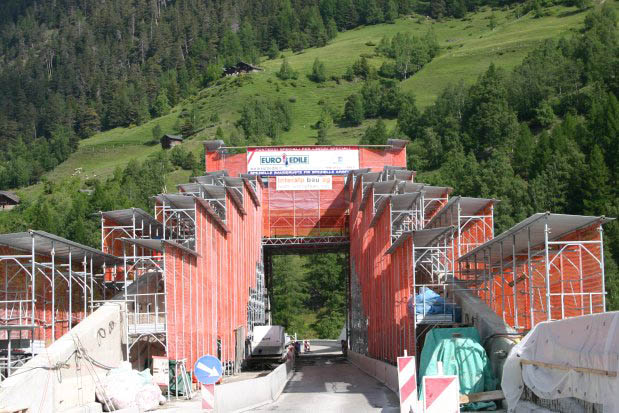 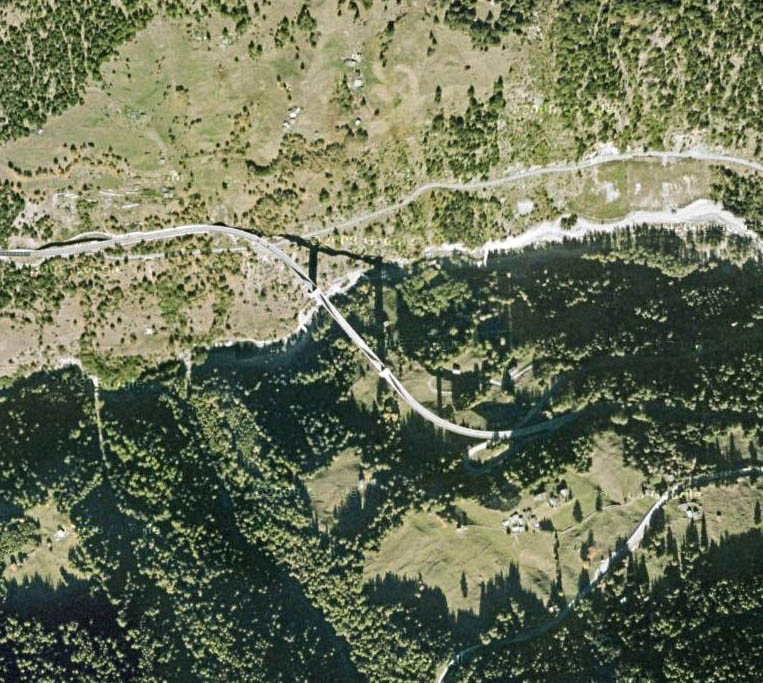