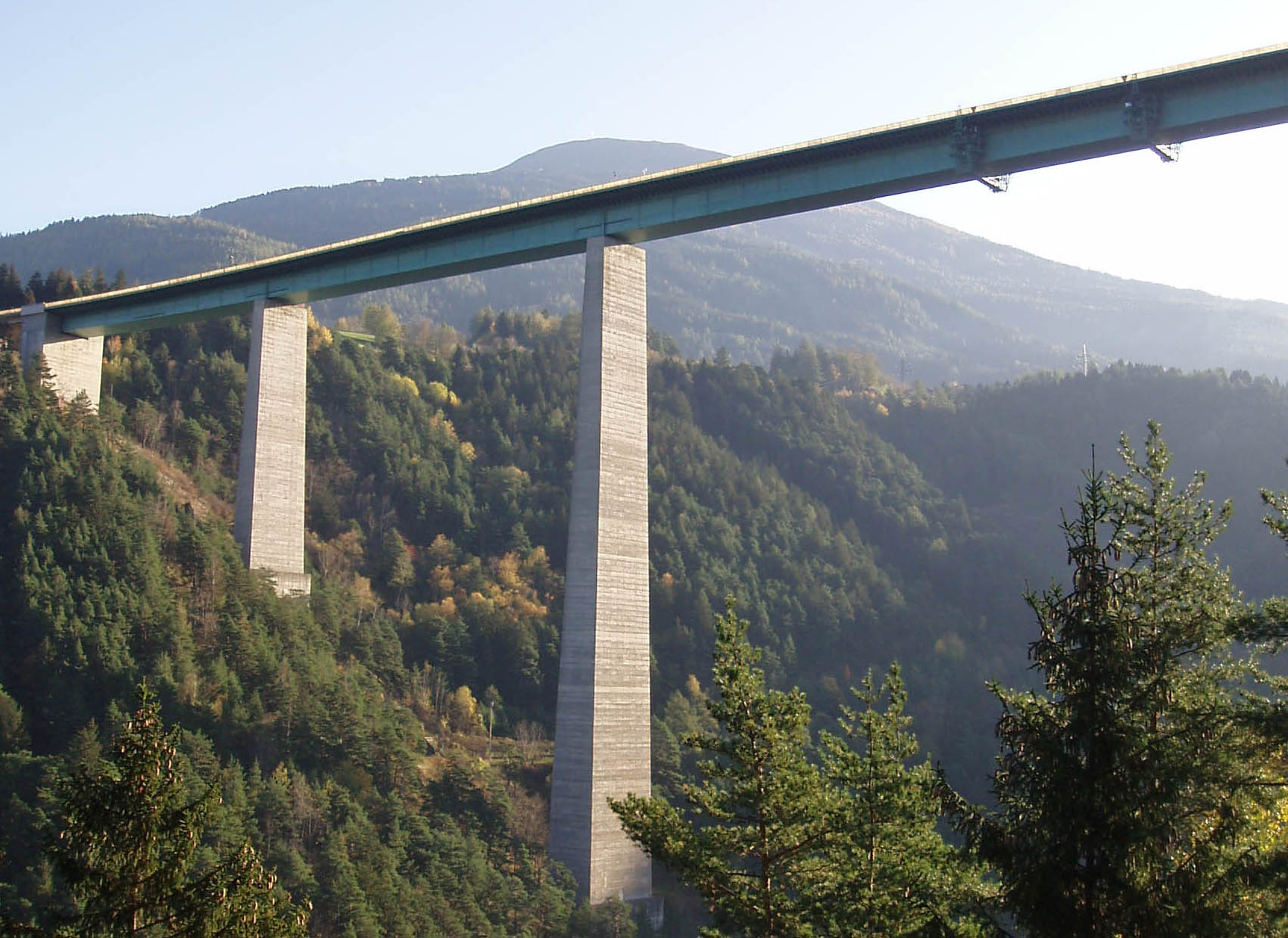 Completed in 1963, the Europabrücke was the highest bridge in Europe for 10 years until 1974 when the Sfalassa Gorge and Italia Viaducts opened on Italy’s A3 motorway. All 3 of these structures were exceeded in 2004 when France opened the Millau Viaduct, now Europe’s highest bridge.

Spanning 623 feet (190 mtrs) above the Sill River, the “Bridge of Europe” is located just south of Innsbruck on the Brenner Highway. The superstructure of the bridge consists of a massive steel box girder with a central span of 650 feet (198 mtrs), still one of the largest in Europe. The enormous girder reaches a depth of 25 feet (7.7 mtrs). Running across it are 6 lanes of traffic requiring a roadway width of 75 feet (23 mtrs). Equally impressive are the massive concrete piers that drop almost to the floor of the valley. Pier number 2 measures 476 feet (145 meters) high from the foundation to the underside of the box beam or 518 feet (158 meters) from the lower side of the pier foundation and was the tallest in the world at the time. Prior to Europa, the world's tallest bridge pier was 109 meters on California's Pit River Bridge. Europabrücke was surpassed in 1974 by Italy's Rago Viaduct with piers 147 meters tall. Germany's 178 meter tall Kochertalbrücke piers brought the record to Germany for 25 years before the pier height record finally returned to France with the 245 meter tall pier of the Millau Viaduct.

Prior to Pit River, the tallest concrete piers were on Switzerland's Sitter Viaduct at 99 meters if measured to the top of the structure and France's Fades Viaduct at 92 meters. The tallest steel bridge tower was the 97.5 meter main tower of the Gokteik Viaduct in Burma. Before Gokteik the tallest steel bridge pier was the central tower of the Kinzua Viaduct at 87 meters. Before Kinzua the 1862 Grandfrey Viaduct of Switzerland held the record with steel and stone piers 79.5 meters high. In 1857 the Crumlin Viaduct was the tallest with purely steel piers 64 meters tall while the 1856 Sitter Viaduct had stone and iron piers of approximately 56 meters in height. The 1852 Portage Viaduct had masonry and timber piers of 67 meters. Prior to Portage there were few true "piers" of great height, only stone aqueducts such as the Pont Roquefavour in France and the Ponte Delle Torri in Spoleto, Italy with structural heights of 82 meters. Spain's Puente Nuevo or New Ronda Bridge also has a structural height in the 100 meter height range though the masonry walls hug the sides of the gorge cliff more like a giant foundation then a true stand-alone pier or aqueduct.

In 2003, several sensors were placed throughout the Europa Bridge structure to monitor accelerations, movements, temperature changes and other fatigue related stresses that might shorten the life of the bridge.

The span is also the home of Europe’s highest legal bridge bungee operation. Located on a platform under the center of the main span, the thrilling plunge is a spectacular way to take in the massive scale of the bridge and the open space below it. You can check out the bungy operators at http://www.europabruecke.at/content.html and http://www.bungyjump.cz/indexe.html.

Sadly, the construction of Europabrücke took the lives of 23 men, an unusually high number for such a modern bridge. Included among those were 3 of the bridges’ engineers, Herbert Henning, Hermann Staf and Hans Gaidoschik. A chapel designed by Hubert Prachensky was built on a hill on the west side of the bridge to commemorate the lives lost. 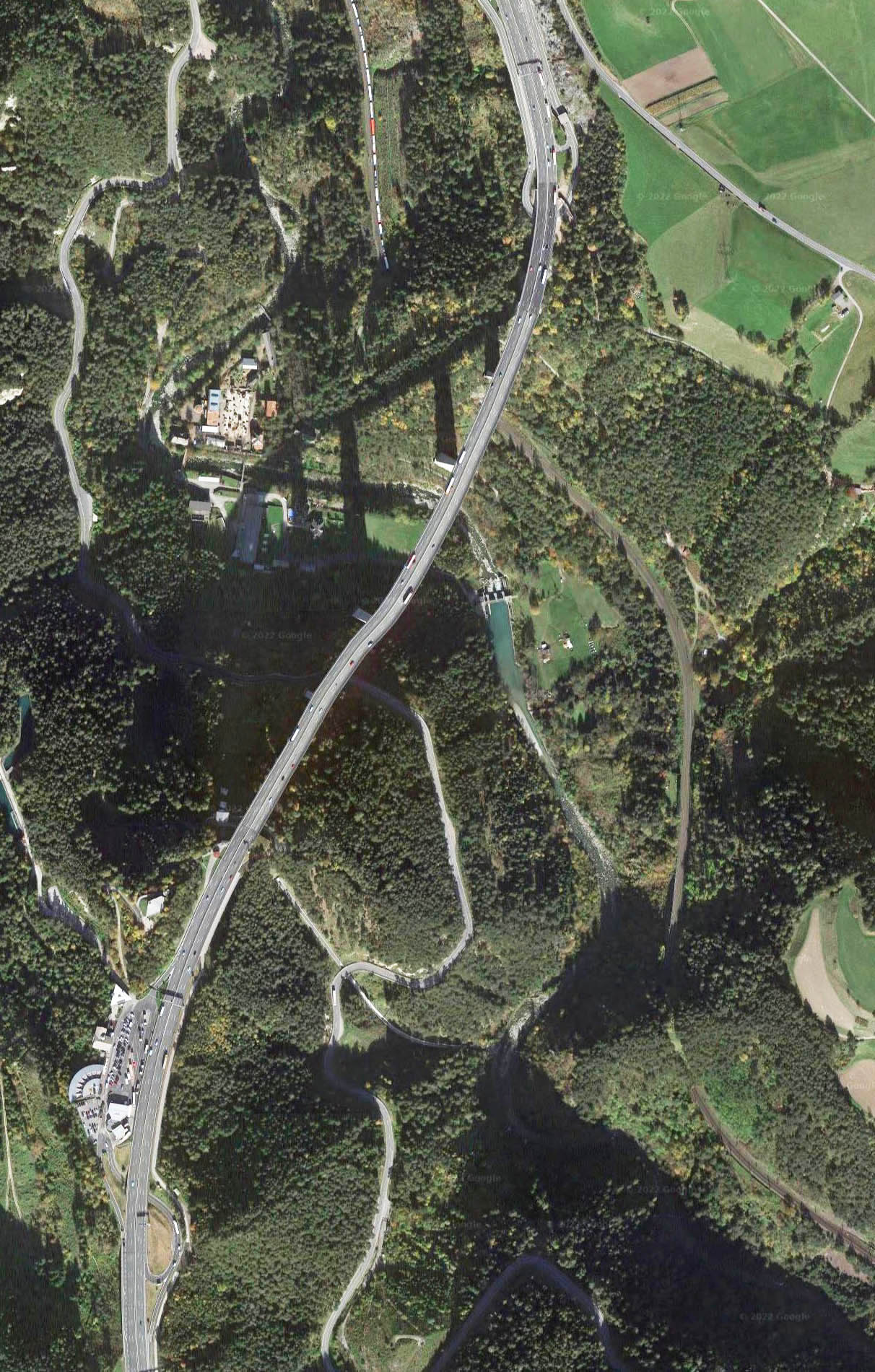 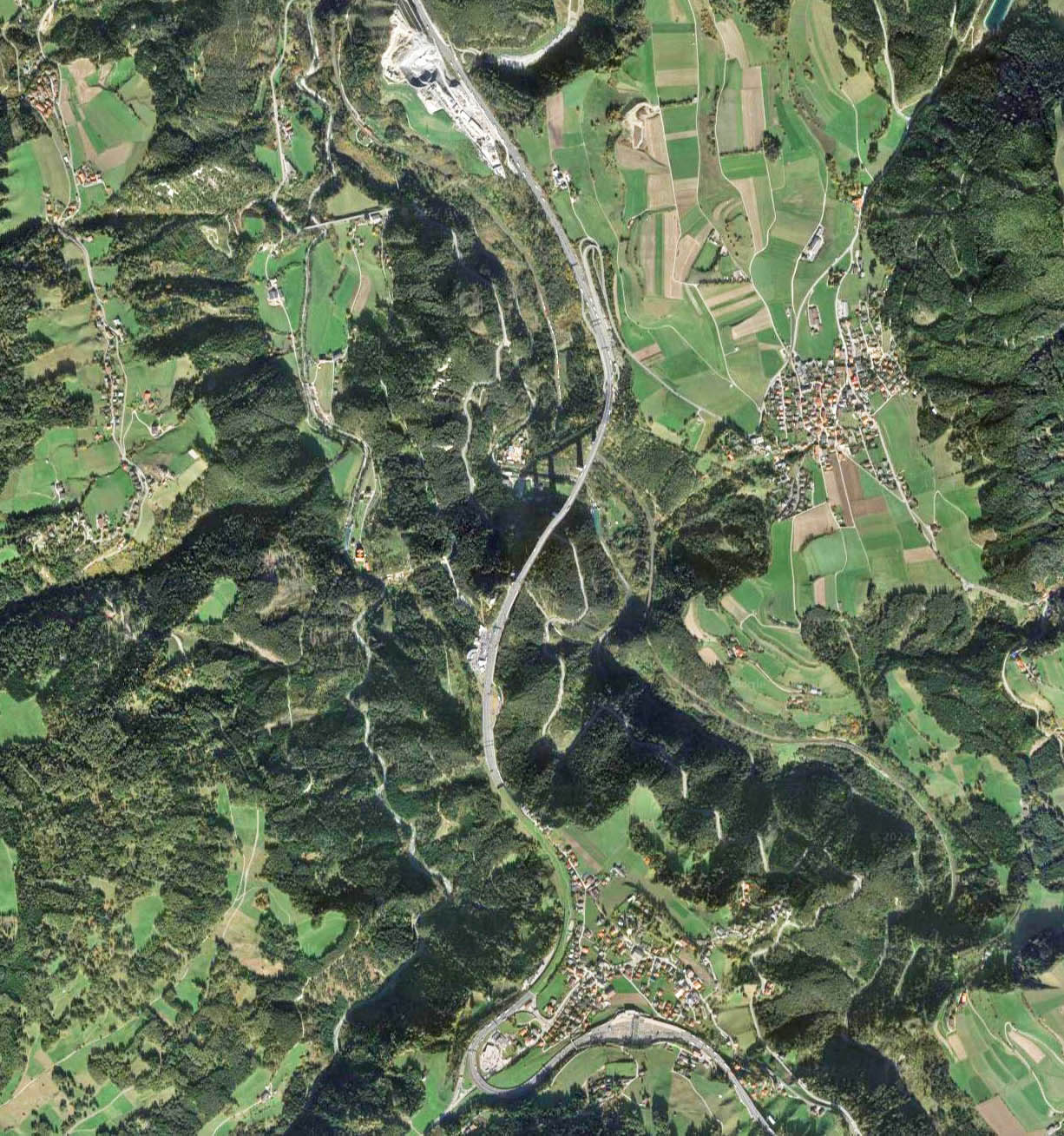 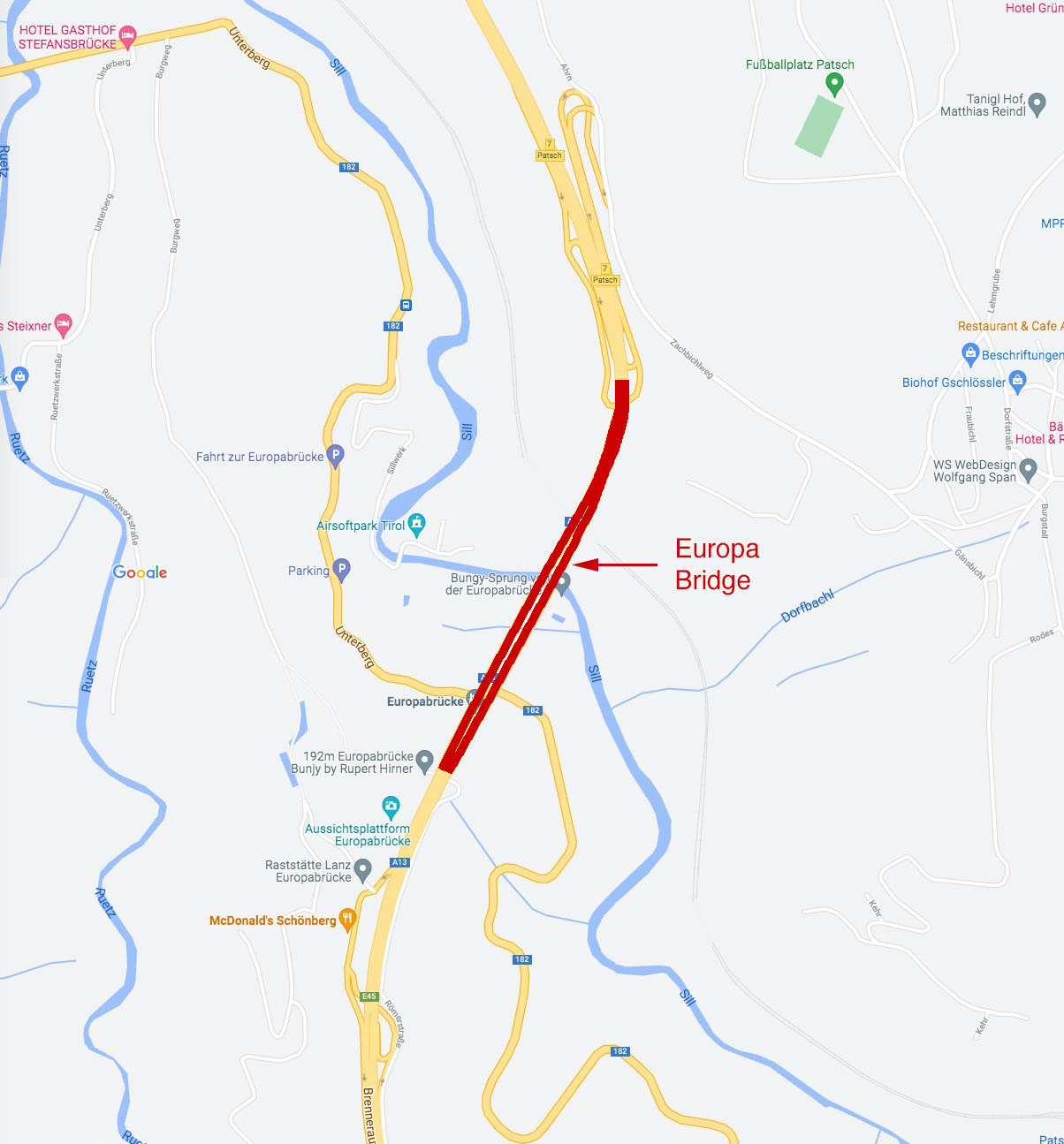 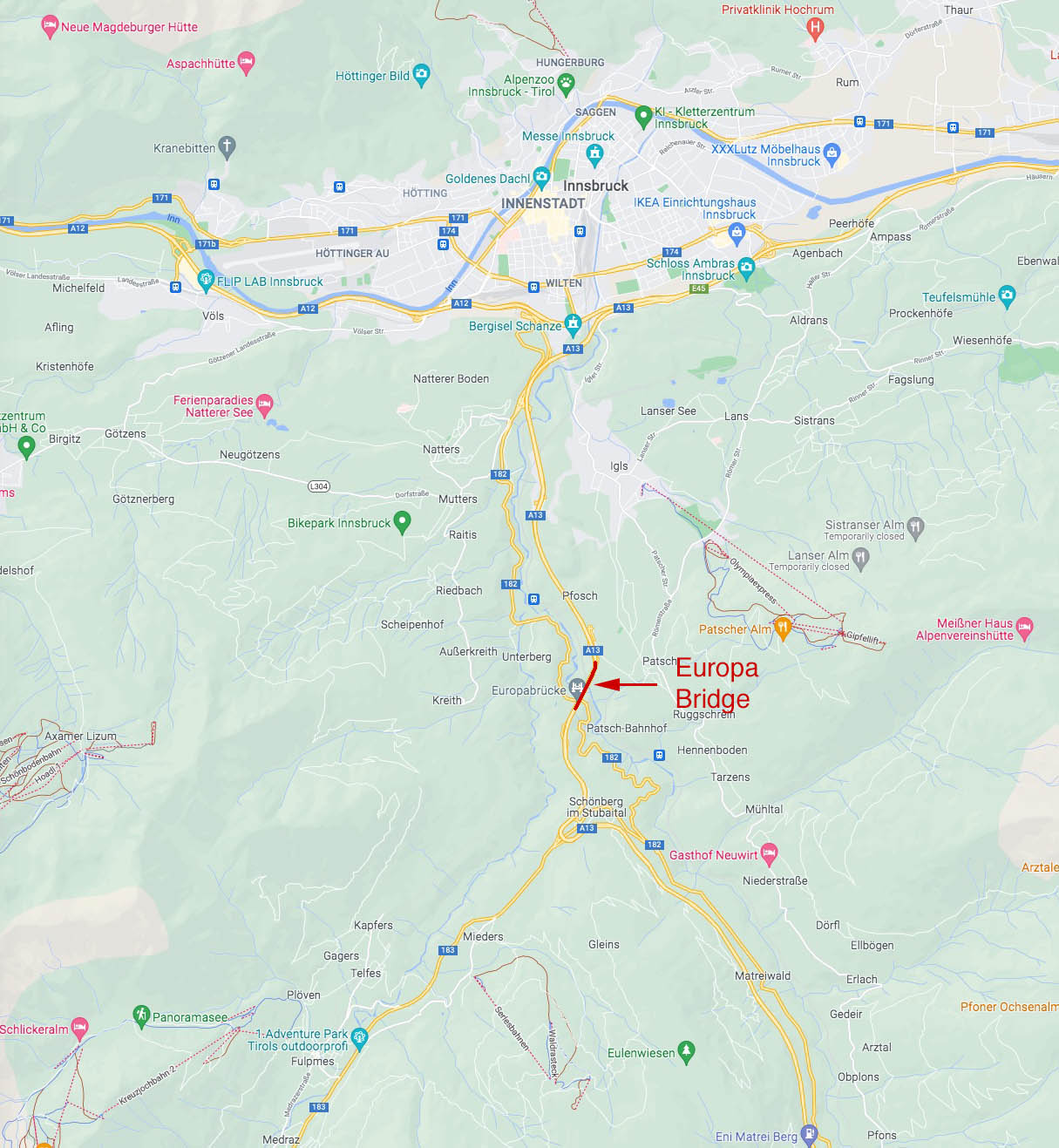